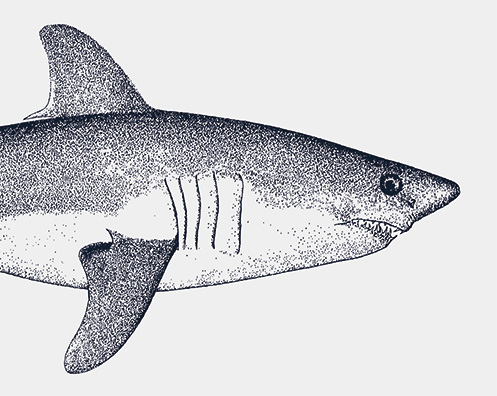 Anyone who knows me, as an angler, knows I am also passionate about marine conservation. In fact, most anglers I know are the same, the culture in sea angling has changed dramatically over the last thirty years, with most anglers having adopted catch and release as the norm.

When it comes to some species sea anglers have a, largely unwritten, code of conduct around catch and release – this applies, in particular, to elasmobranchs; sharks and rays. We know the damage commercial fishing has done to many shark species in UK waters; tope and spurdog being a prime example and want to make sure we don’t make this worse. So we use appropriate tackle when targeting them and always get them back in the water as soon as they’re unhooked.

This also applies to ALL shark species that anglers target. Anyone who knows anything about sharks and angling will know this. We just don’t kill them and try to make sure we fish for them in the most humane and sustainable way.

So, it’s very disappointing when ill-informed and emotionally motivated “conservationists” launch attacks on sea angling without bothering to find out the relevant facts. This has never been illustrated better than in the recent opening stages of the JNCC review into a possible Schedule 5* listing for Porbeagle sharks.

As I have recently reported the Shark Trust has been a prime driver and supporter of a campaign to ban anglers targeting porbeagle sharks and common skate. They are attempting this via the JNCC (Joint Nature Conservancy Council - which advises the government) five yearly review of the listing of species under the Wildlife and Countryside Act. In what appears to be clear abuse of the review process, ‘someone’ has provided the JNCC with ‘data’ that is little more than a misleading propaganda rant directed at recreational anglers, totally misrepresenting recreational anglers, and selectively drawing upon published research whilst ignoring that which doesn’t fit their narrative.

Now I can understand that some people want to stop us sticking hooks in fish– but to attempt to do this by using misinformation and downright untruths is quite disgraceful and demonstrates their case is so weak as to be without any real credibility. It’s interesting that the catchphrase often heard from the Shark Trust is “Follow the Science”. Yet this submission is so far removed from that as to be laughable, and would close off the primary source of scientific research into porbeagle sharks.

Let’s look at some of the claims made, which we only uncovered via Freedom of Information requests submitted by angling organisations.

Porbeagle are intentionally targeted – predominantly caught and released or, on occasion, retained (killed) – by recreational anglers throughout UK waters.

‘Predominantly’ and ‘on occasion’ suggest that retention and killing are not uncommon. This is wholly inaccurate – This is so far from the reality and attitude of recreational anglers towards porbeagle sharks that it is incomprehensible. there is no evidence that anglers retain/kill porbeagles, intentionally or otherwise.

Although most UK shark anglers practice ‘catch and release’, there are no UK regulations or restrictions on fight time, in-boarding, time out of water or handling practice.

This is specious nonsense - where is the evidence that suggest a regulatory framework is required? ‘Restrictions upon fight time' is a nonsensical point. Are the authors suggesting that upon reaching a ‘restriction upon fight time’ that a line should be severed leaving line, leader and hook attached to a fish?

This is very selective use, (or omission) of data. There are several UK studies, but they just didn’t give the answers the authors wanted….. and in the recent Exeter University study mentioned, incidentally sponsored by the Shark Trust, all five fish caught and released survived.

The key phrase here is “commonly reported”. By whom? When? It’s just misleading. No angler wishes to fight a fish for three hours. Exceptionally large fish caught by inexperienced anglers may result in long fight times, and they may have caught it accidentally while targeting other fish using gear not designed for sharks - but it’s very rare.

Anyway, this would not be addressed by the proposal to stop all targeting.

Once the shark is exhausted and drawn alongside the fishing vessel, they are commonly in-boarded.

This is another statement mixing two issue in a specious fashion. Most Porbeagles are brought boat side long before they are ‘exhausted’. This emotive and ill-defined language is designed only to paint a specific picture of anglers dragging fish around until they are near death which is not accurate. Boarding of sharks still occurs but the major angling clubs and shark skippers now discourage this practice (and we don’t publish pictures of boarded sharks to help that process). There was a recent fierce angler led backlash about an Irish thresher caught and boarded in 2021 – which shows how much anglers care about this issue.

Anglers regularly reporting that large specimens encountered in UK waters are generally mature female, and given the life history strategy, often believed to be pregnant and vulnerable to premature parturition (birth).

This is unproven- it’s a mix of hearsay and inaccurate statistics. the assertion (that) the fishery is largely mature females is incorrect. Data collected from anglers by genuine scientists show that to be inaccurate. In 2021 the offshore fishery from North Cornwall from June was 70:30 female: male, but very few fish were mature. The inshore fishery was 80:20 Male: female based on 350 captures from 1-6 miles from shore. These fish were >90% sub-adults. The mature females are found for a very short period from March until the start of May and, even then, there is a larger congregations of >90% males less than 10 miles down the coast. Generally, males stay in shallower water for longer than females. Furthermore, we don’t know how many of these female fish are pregnant, how far along term they are, and whether the capture of them induces foetal abortion.

Anglers in general, and organisations and clubs, specifically the Angling Trust, are against deliberately targeting pregnant porbeagles. And there may be an argument that we need to examine these risks to those specific individuals, but that is not the same as making unsubstantiated generalisations and presenting them as ‘facts’.

There is no concrete evidence for this and the term ‘regularly’ is specious. Once again presenting unquantified frequency and theory re pregnancy is not a scientific basis for a policy stance.

This is relevant to commercial bycatch problems not recreational angling. Despite all the noise about working groups etc E-NGO’s and Govt agencies have serially failed to engage with the Commercial sector to address this crucial problem.

Although many anglers practice ‘catch and release’, hooked sharks can be played for often in excess of three hours, post-release mortality remains unquantified although research is currently being undertaken by a team at Exeter University. Further, there is no legal or regulatory requirement for anglers to release Porbeagle alive and/or unharmed, nor is there a catch limit, seasonal restriction or minimum/maximum size. The shark fishing ‘season’ – during which porbeagle are targeted – generally corresponds with months when gravid females are moving through British waters, and with months in which in which the weather is more settled, i.e. late spring to early autumn, allowing angling vessels to safely operate in offshore waters.

Where to start with this farago of repeated misinformation and nonsense. Just, in case you missed all the emotive language, the selective use and omission of real science, the misrepresentation of anglers fighting endless numbers of pregnant fish for three hours regularly. It is repeated later in the document.

The fish are not retained, so size limits are irrelevant, and in case I missed something we have yet to design fishing gear that can select a size of fish deemed to be appropriate by the authors of this rubbish.

Bringing management of the recreational fishery for porbeagle in line with that of the commercial fishing industry with regards the killing, injuring or disturbance of porbeagle as they move through UK territorial waters.

It is beyond belief that the authors attempt to equate sea angling with the utter devastation wrought upon porbeagle stocks by commercial fishing, the very people responsible for the decline of the species.

Intentionally targeting/retaining/killing Porbeagle as a trophy or for consumption

Another example of a gross misrepresentation of RSA anglers attitudes towards sharks, repeating the unproven and inaccurate assertion that anglers kill and eat porbeagles.

In-boarding and handling the shark before returning to the water, in the process generating significant physiological stress shown to cause post-release mortality in some species of shark, and possibly physically damaging the shark.

Boarding is a problem but one that is being addressed, there is now a consensus amongst major organisations, clubs, and high-profile sharking skippers that this is not appropriate.

The extent of misinformation, emotive, biased content in this submission should not go unchallenged. The whole this does the authors little credit and shows little understanding of recreational angling and its practices

The worrying thing is this nonsense could be used about any kind of sea angling species – and this is clearly where this is going.

This magazine and all the angling organisations I have worked with have conservation front and centre of our angling ethos. One of the reasons I got involved with the Angling Trust was to try and highlight the problems commercial fishing causes to marine stocks and improve the way anglers treat the species they target and catch. I can accept that some don’t like angling but the reality is that angler contribute a lot to both information, and data, we have about marine species and care a lot about stock levels and conservation – particularly in relation to minimising discarded tackle and improved fish husbandry. But it’s very disheartening when people with an agenda use misinformation and false equivalence to push their own emotive agenda. This is little short of shameless propaganda and the author would do better to actually engage with recreational sea anglers and the real scientific organisations who have been working with them for several years to provide the majority of the data on the status of the species. Those collaboration between anglers and scientist are now being presented to contribute to the understanding of the stock. The species global management body (ICCAT) repeatedly talks of gaps in the data that in many cases only angler derived data can fill.

This ill-founded proposal, using downright misinformation would close off that source of data, actually compromising the management for porbeagle shark at the altar of a misguided ideology that ironically damages the very species they claim to want to protect.

If the sport has made one mistake in recent years it is that it has failed to demonstrate the positive result it has delivered to marine conservation and fisheries management.  This is something we must address because, just as we have leaned within our sport that education changes behaviour, so it will be with how we are perceived which must also be done through education.