Iconic Out of Town episodes restored and re issued.

Network Distributing are releasing a number of episodes of Jack Hargreaves iconic country series Out of Town. Those of a certain age all loved these programmes and Jack’s relaxed presentation style. Most of the footage is unseen since original transmissions in the 1970s, and it has been painstakingly restored by Network’s restoration team and revisited to create six new refreshed programmes.

The episodes, called Further out of Town showcase digitally restored film sequences from the programme with new introductions by Jack’s stepson Simon Baddeley.

The new episodes take in numerous locations in and around the New Forest to Brownsea Island in Poole Harbour, off the coast of Brighton, South East London, as well as the coast of Stornoway and Andalusia in Spain. Exploring pests in the garden, a horse market in the city, butterflies, fishing and more they encompass a wide variety of country and outdoor life activities.

Of particular interest to us are an episode about fishing in the Hebrides, collecting peelers in Kent, black bream fishing, fishing in a north wind and episodes about lake fishing.

Further Out of Town – available direct from networkonair.com 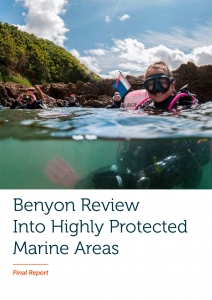 Recreational sea anglers face the prospect of being locked out of some of their favourite fishing grounds if Ministers implement the recommendations of the Benyon Review of Highly Protected Marine Areaspublished earlier this month.

Despite recognising the economic importance of recreational sea angling and highlighting the importance of meaningful stakeholder engagement and partnership working the Review Panel did not include any angling representatives nor anyone with a detailed knowledge of the sector.

Consequently, low impact recreational fishing was treated as having equivalence with damaging industrial practices such as trawling, dredging and drilling. With 46 sites identified in the report as candidates for a network of new Highly Protected Marine Zones covering up to 10% of English seas, anglers could see themselves no longer able to fish in popular places such as Poole, Langstone and Chichester Harbours in the South; the Dogger Bank, Wash, North Norfolk Coast and Blackwater and Crouch Estuaries in the East; Plymouth, Falmouth and the Severn Estuary in the South-West and Morecambe Bay in the North-West.

The Review, chaired by former Fisheries Minister Richard Benyon, acknowledges that the UK currently has a range of protections in place which offer protections for a designated feature or habitat within their boundaries.

In its evidence to the panel the Angling Trust highlighted good practice from around the world where far from excluding recreational fishing many marine protected areas are actually designated as recreational only zones in acknowledgement of the light impact that rod and line fishing has on fish stocks when compared to commercial netting or trawling. Furthermore, the presence of sea anglers in these zones serves to provide a system of enforcement and monitoring which would otherwise be largely absent.

The Review recognises that the economic hardship of excluding commercial fishing from these zones but is silent on the impacts on the more valuable recreational sector including charter boat operators who form a key part of the coastal economy.

For more on this go to: https://anglingtrustcampaigns.net

The Species League Charter Boat Species Hunt 2020 is now up and running again. 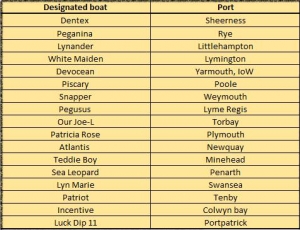 Following the recent break from fishing due to the Covid-9 lockdown the organiser of the popular Charter Boat Species league is now back on for the rest of the summer. Anyone can enter as long as you come to one of the Species League matches during the year. The idea is to catch as many species as you can from one of the Charter Boats on the published list (see website below) at any time during 2020 and every species you catch in any Species League match on any Charter Boat also counts. There are 17 designated Charter Boats across 17 ports so most will have a local boat to frequent.

We’ll be reporting on the progress of this league as the summer progresses and we’ll see if 2019 winner Steve Batchelor comes out on top again in 2020. All boats will adhere to the current social distancing guidelines issued by the Angling Trust and the PBA.

For more and an entry form go to www. speciesleague.com 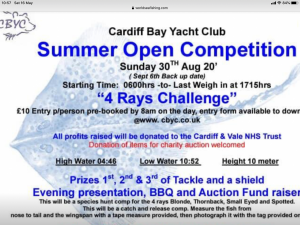 On Sunday 30th August the Cardiff Bay Yacht club is holding a summer 4 Rays Challenge. Anglers will be hunting blonde, thornback, small eyed and spotted rays and it will be on a catch and release basis measuring fish from nose to tail and wingspan. Entries will eb submitted with photographic evidence. Based at Penarth and running from 6.00am to 5.15pm the event is £10 to enter per angler and entries have to be pre booked by 8am on the day of the competition. Prizes include tackle items and there will be an evening presentation and barbeque. There is a back-up date of September 6th

C-MAP, a leader in digital marine cartography and cloud-based mapping, has announced the release of a new version of their MAX N+ charts featuring a variety of updates and improvements. Enhancements to the charts include new port plans, as well as additional detail to existing ports, High Resolution Bathymetry (HRB), Genesis Layer overlay and more detailed information at all zoom levels. Updated detailed port plans
New and updated port and marina plans now offer an upgraded level of detail, allowing boaters to approach any harbour and inlet with confidence. HRB enhances C-MAP MAX-N+ charts with the high resolution depth contour detail. The HRB Layer offers extra-contours of underwater pinnacles, ledges and canyons aiding finding fishing marks as well as navigation. This new level of detail combined with the custom depth shading is available in all Navico (Lowrance, Simrad and B&G) chartplotters. The new Genesis Layer feature is an update which allows anglers to take advantage of the power of community. C-MAP MAX-N+ charts come pre-programmed with C-MAP Genesis Social Map data. When used with Genesis Live, it also allows you to discover new fishing mark on your Lowrance plotter. Create your own map for free, in real-time and turn on an overlay on your C-MAP MAX-N+ chart.