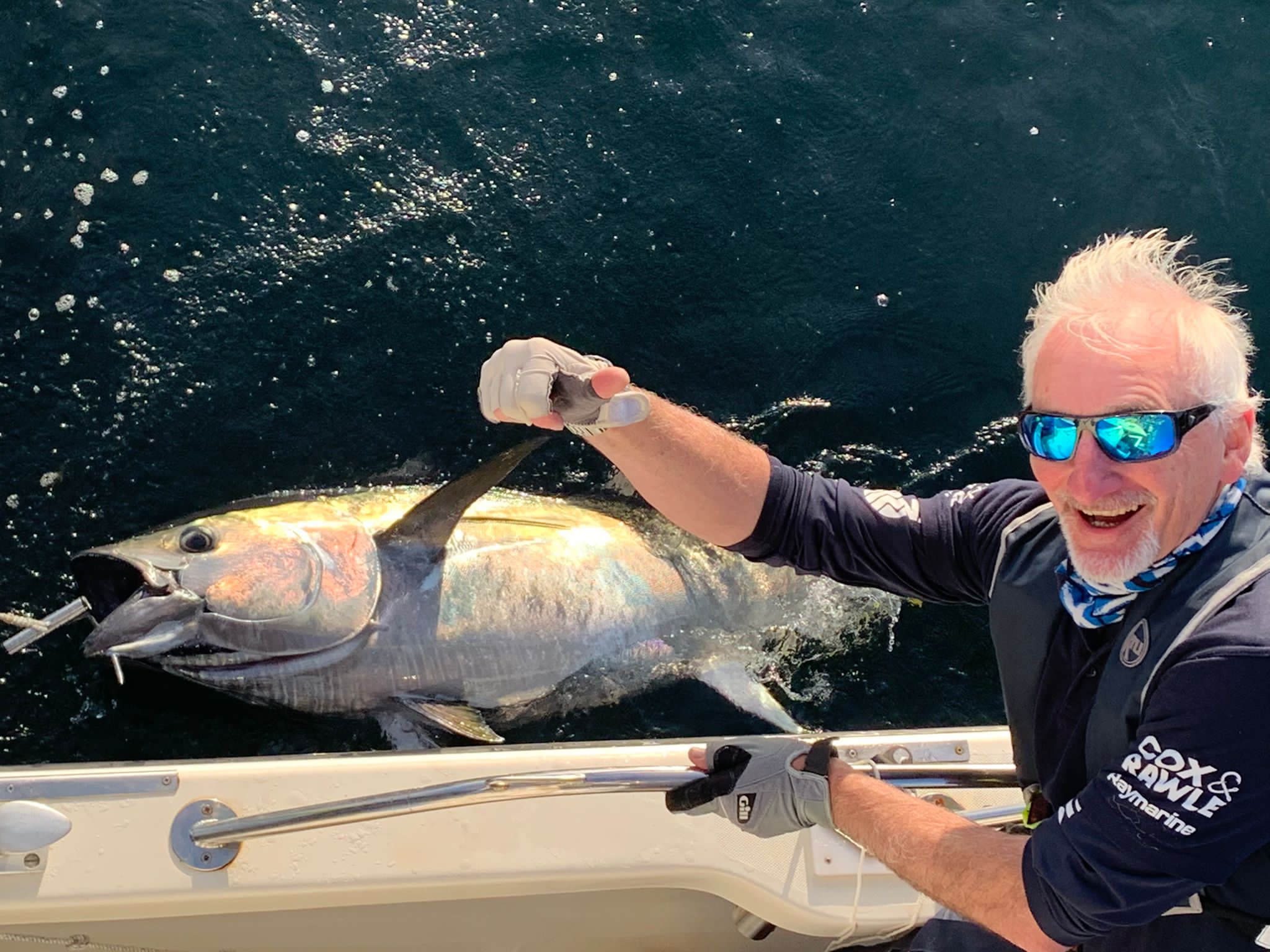 Now that the CHART programme is coming to an end for this season, and it looks like 300 plus fish will have been tagged its time to take stock of where we are with this fishery. An incredible amount of data about bluefins has now been collected, not just through the tagging but in terms of sightings, experiences in fishing for them, the gear we need and their observed behavour. Some received wisdom has been junked and new theories abound about how these fish feed and move around.

The good news is the mortality rate ap­pears to be very low, much lower than we anticipated when the programme was originally discussed. This is a tes­tament to the fast learning skills of the skipper and crews.

What does all this mean for 2022 and beyond. Since we realised we had a UK quota Defra have, quite rightly, been pretty cautious in their approach to bluefins. Anglers are still not allowed to target them unless they are fishing on a licensed charter boat taking part in either the Thunnus or CHART tagging programmes both of which, I would anticipate, will continue into next year. But there is one critical development which will affect the future and this is the downgrading of bluefin tuna from endangered to “of least concern” by the IUCN just after the current programme started. This is a reflection of the number seen both here in the UK and beyond.

There seems to me that there is no need for what is called “the precaution­ary principle” to be applied to these fish because the stock is apparently healthy. The fact we have a low (appar­ent) mortality rate over the last three months means the skippers and anglers have taken on board advice from the pre-programme workshops and have learned how to handle the fish safely. The result is we have the potential for a sustainable and vibrant fishery here in the UK – which is exactly what we as anglers wanted.

For me it’s important that DEFRA need to look further than one year ahead and plan for the long term. In addition, they need to resist, for now, the siren voices of the commercial fishing lobby who predictably want a slice of the 50 tonne quota. Their view, which is legitimate, why shouldn’t they exploit the stock too, The difference is of course recreational anglers won’t be killing fish, just catching them for sport and the secondary income generated for the Cornish economy by recreational anglers coming to catch bluefins will be significant.

There are inherent dangers to opening the fishery to commercial concerns too early – before we really know enough about the stock. However, if the stock stays healthy here is no reason why, at some stage in the future, CORNISH BLUEFIN tuna couldn’t be a premium menu item in Cornish restaurants (and beyond).

My  view is that next year DEFRA should sanction a recreational fishery that is open to anyone who has taken part in training, it’s not about jumping in a boat and rushing out to fish, chucking out lures or live-baits. There is a little bit more to it than that. You have to have the right gear, boat size and know the right techniques for targeting, catching, boating, and recovering the fish. These are big wild animals and need to be treated with re­spect by anglers. Having felt the power of a 200lb fish I can vouch they are not to be messed with otherwise they’ll really mess with your head.

On my fifth trip I was told I was first on the rod, I was quite nervous. I’d seen people fight these fish at first hand and could see the physical and mental effort which goes into it. Was I up to it? Well it turned out I was and got mine in in 20 minutes or so but although it wasn’t easy – the power of these fish is unbelievable.

The technique for fighting the fish is crucial you really have to take on board the advice of the skippers’ instructions to make sure you use the right harness, set up correctly and make sure.

While we were out on these trips we saw at least 20 “privateers’ out illegally fishing for tuna – they were ignoring the regulations and, in some cases, fish­ing with inappropriate gear or boats. To mitigate this, we need to create a system of licensing which allowed people with appropriate training into targeting the fish while they’re here in our waters.

There is a post CHART consultation coming up which will assess the programme and hopefully look at the wider issue. Following this process I believe we need to set up a bluefin body which can facilitate licenses as a recognised body but separate from CEEFA and DEFRA.

The road to where we are now has been long and difficult and has need a lot of collaboration, negotiation, com­promise and co-operation between anglers, scientists and officials but it’s crucial we maintain this partnership going forward and that we nurture this fishery because it could be the jewel in the crown of UK recreational sea an­gling and we all need to make the most of it while protecting the stock.

To conclude, let’s not forget….

It is a fundamental principle that recreational anglers should be permitted to fish for a species UNLESS there are compelling reasons to prohibit that. In the case of UK Atlantic bluefins there are NOT.

CHART has shown that: