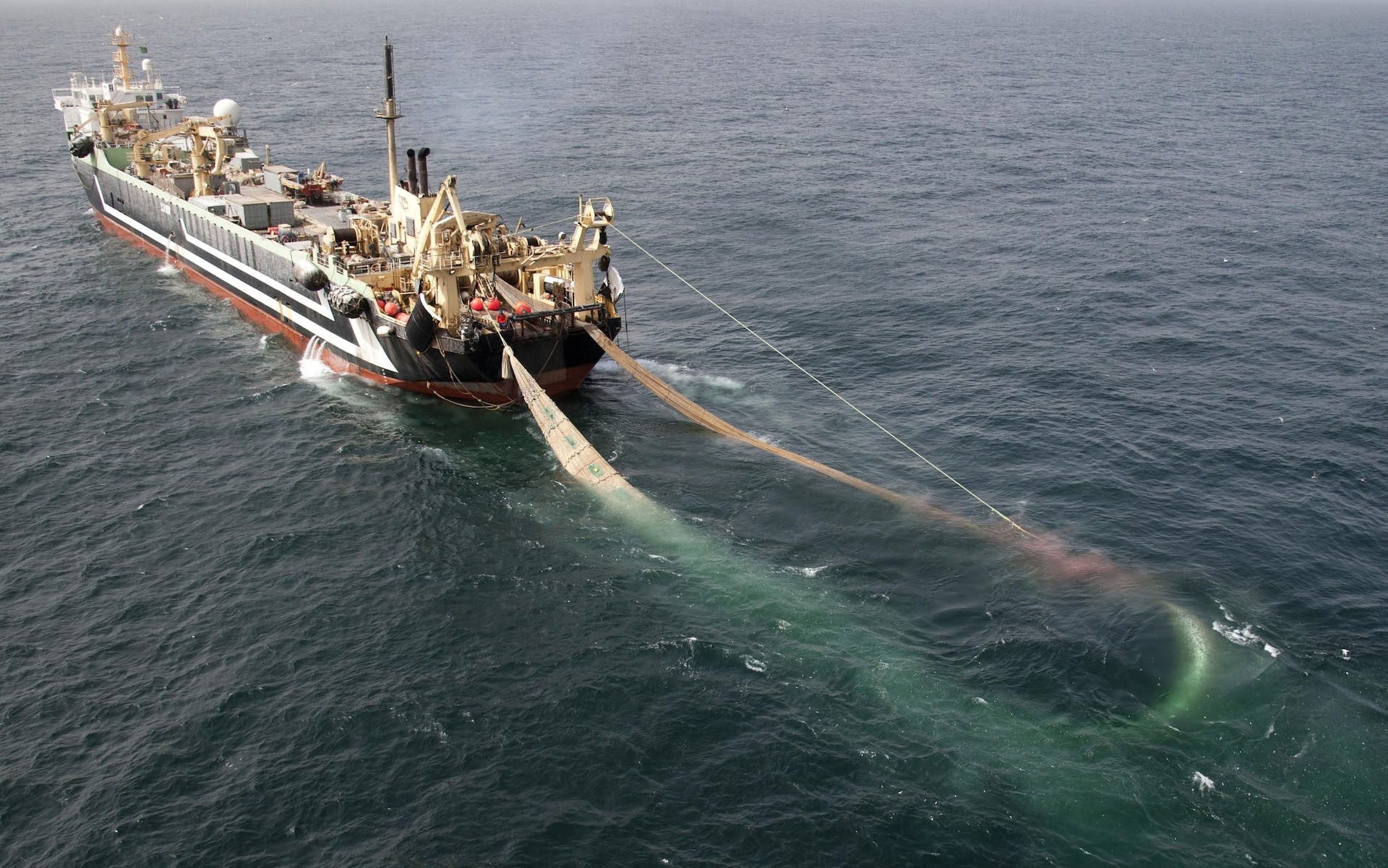 Now all of my blogs are about angling matters…but for this one I am focussing on something which affects our fishing opportunities and is causing waves across the angling community. Super Trawlers!

There has been a lot of recent noise all over social media, and elsewhere, about a super trawler, the Margiris, which has been operating in the Channel in recent weeks. It was first picked up by an eagle-eyed observer who spotted it on publicly available AIS (Automatic Identification System for boats) tracking web sites.

As I write this massive boat is about 15 miles off Worthing trawling around, presumably fishing for mackerel. It is huge. 150m long and a dead weight of 6200 tonnes. Not far away from it is the Annie Helina a Belgian factory trawler of a similar size which is also working the area very hard.

For anyone who has an interest in sea angling, fisheries and fish conservation, or is engaged in inshore fishing seeing these monsters hoovering up vast quantities of fish day after day is heart breaking. No wonder, we all think, fish stocks in the English Channel are so depleted.

I’ve had calls and emails, and seen Facebook posts, from all sorts of people from local inshore commercial fishermen to concerned boat anglers and conservationists. The common theme is “how can we allow such large-scale fishing to happen?” Many blame the EU, without reason it has to be said, but they are EU flagged vessels owned and run from Dutch or Belgian based commercial fishing organisations.

The Margiris is particularly notorious. She was originally authorized to catch a quota of 18,000 tonnes of jack mackerel and redbait along the southern shores of the Australia but, after protests by the fishing industry and conservationists was prohibited from fishing there for two years. She was bought by a Dutch company, Parlevliet & Van der Plas.

Subsequently she has been fishing in Irish waters and most recently the English Channel. The thing is how is it possible?

The European Commission was asked about this specific boat and an official responded:

“The Commission is aware of concerns among NGOs concerning the activity of large trawlers (in UK waters). ‘All vessels operating in EU waters, large and small, have to abide by the rules and this is controlled by the Member States’ inspection and control services. It is a priority that all Union vessels comply with the legislation in force. Therefore, if there is a suspicion that vessels infringe rules then the Commission would like to be informed and receive concrete facts. ‘Moreover, fisheries inspection authorities in the Member States also need to be informed about this.’

What can be done?
The problem is that although the boat has been boarded, and inspected, recently it was found to be fully legal and operating within the rules and regulations set out in the Common Fisheries Policy. Now some say that whenever Brexit happens we’ll be able to “throw these boats out of our waters”. There are two flaws to this line of thinking; firstly these boats are usually outside twelve miles and are therefore in EU waters and secondly they are fishing entirely legally within the rules of the CFP – which we will still have to be at least shadowing even if we do Brexit.

Depending on what it’s targeting it will likely to be fishing to a quota – so when it has landed its quota of a specific species it will have to stop – and move on to something else.

Clearly these restrictions don’t apply if the boat is hauling out non-quota species, but it very likely to be targeting mackerel, which are quota species. Many inshore boats feel they are being unfairly penalised when a boat like this is trolling around, the reality is it may not necessarily have any direct impact on their fishing especially if targeting fish they won’t traditionally go for (mackerel being one).

There is of course an issue of mackerel stock depletion, something the EU has taken into account when issuing quota. In 2019 the overall quota was reduced by a whopping 20%, still 653,000 tonnes in total, but that cut represents approximately 160,000 tonnes. As we know this year apart, mackerel have generally been scarce in the Eastern Channel – but again these big boats aren’t necessarily making it worse. Remember that each country will have a portion of that quota, and so the most efficient and quickest way to land that quota is to use a bigger boat. Saves on fuel and time.

From a conservation point of view, it doesn’t matter whether one big boat is hoovering up the quota or 10 small boats are, the overall take is always going to be the same.

I have to say here, that if I had my way I would like to close the Channel to all boats over a certain size for ten years and allow only under tens to operate…. boats which are selling fish to, and are part of, their local communities – even the whelk and cuttlefish boats which are exporting 99% 0f their landings.

But this isn’t likely to happen any time soon so we have to live by, and influence, the rules and regulations currently in place. These include the following:

EU countries are obliged to report annually on this balance, using the guidelines prepared by the European Commission. For fleet segments with overcapacity the member state has to take measures under an action plan, to achieve the balance, for instance through publicly funded decommissioning of vessels.

For each EU country a fishing fleet capacity ceiling is established, in kilowatts (kW) and gross tonnage (GT). New fishing vessels may enter the fleet only after the same fleet capacity (in kW and GT) is removed from the fleet. Through this ‘entry-exit’ system Europe’s fleet capacity can no longer increase. The idea here is to maintain the overall capacity below a maximum level. This is reviewed regularly. So by this token this boat is taking up a huge percentage of its allowed tonnage. Because it is flagged in Lithuania means its subject to Lithuanian tonnage.

As a general rule, fishing vessels registered in the EU fishing fleet register have equal accessto all the EU waters and resources that are managed under the CFP. Access to fisheries is normally authorized through a fishing licence.

There are two temporary exceptions to this rule of equal access.

In the waters up to 100 nautical miles from the coasts of Europe’s outermost regions access can be restricted to vessels registered in the ports of these territories and to vessels that traditionally fish in those waters. 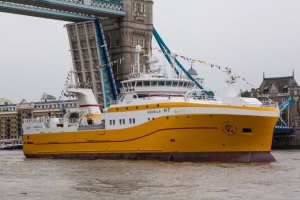 It has to be said there are also massive boats in the UK fleet. The Kirkella, a 75m factory trawler based at Hull can theoretically catch 2.3 million fish on every two-month voyage, 700 tonnes of frozen-at-sea fillets, trawling the seas of the Arctic, Greenland, Norway and the north-east Atlantic, so we need to recognise that we as a nation are causing similar carnage, albeit out of sight 100’s of miles away.

Of course, if the Fisheries bill is re-presented to the House of Commons any time soon then there will be some changes to fishing regulations but really only general and certainly not any which will ‘ban’ all foreign boats inside twelve miles. That was never likely and is one of the many myths which have sprung up around the toxic Brexit process.

Going back to the subject of super trawlers, of course, post Brexit, we could theoretically ban access for all vessels over a certain size inside our waters. Fine, but it would be entirely symbolic. It is true to say that if Brexit actually happens then the boundaries of our waters will change – British waters will be represented by the median line in the channel – equidistant from French and UK coasts. However – at its widest point it is 150 miles and 20 miles at its narrowest but that again won’t affect or protect fish stocks, it will merely displace some of the current fishing effort.

So, there is very little we can do, materially, to prevent these big boats from operating should they wish to, unless the EU takes a decision to ban them from EU waters. To effect that we would have to be lobbying strongly from within the bloc, once out our protests will be easily ignored.

In summary there is a lot of justified concern about fishing vessels of this kind raping and pillaging the waters around the UK…the answer is to change our entire European fisheries culture which in turn means shutting down or rendering unprofitable hundreds of businesses. It may yet come to that if we are to save what fish stock we have left but who will be brave enough to propose that kind of drastic policy change!