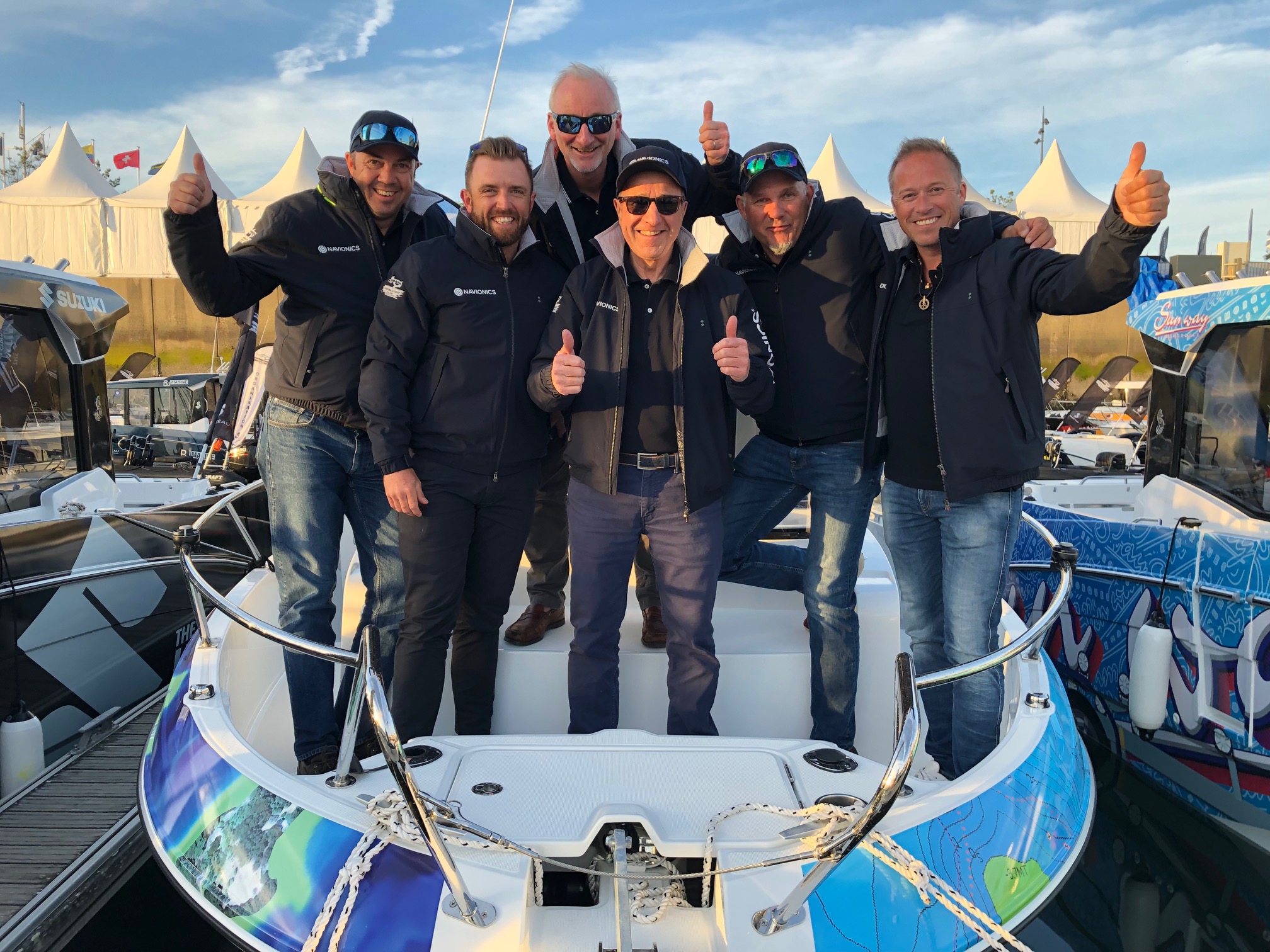 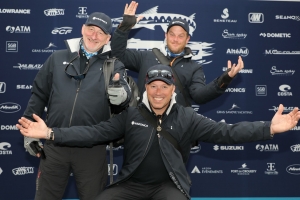 Every year for the past three years I’ve been invited to fish in the Barracuda World Tour Finals in Brittany by Navionics France.

The event is organised by Beneteau and is held out of Port du Crouesty, in Arzon and takes place over eight days. It’s been marked as the biggest European ‘no kill’ fishing competition and has upwards of 120 teams competing for the title to become the Barracuda Tour Champions. This was a title that would earn some serious bragging rights and the Navionics boat would have two teams to try and take it. My team, Team 1, was made up of journalist’s team: myself, Swedish journalist and all-round cheeky chap Jonas Nordigards and Sjoerd Beljaars a lure angler from Rotterdam. I thought “hey-ho here we go this could be fun’.

With us as well was Kyle Waterhouse, Trade Marketing Manager at Pure Fishing and SWBA contributor. His pro team included French bass guide Slyvain Garcia and Swedish pike pro Stefan Trumstedt, who is, apparently, a bit of a celebrity! So across the two teams we had a great mix of nationalities and our support team consisted of around a dozen others selected by Navionics France manager, Loic Moreau. Loic is a great character and the brains behind the planning. He is a very organised manager who planned every detail meticulously – not least the wine selection, which was fantastic! The prospect of three days of bass fishing and socialising with these guys was hard to beat, he event is great fun and although there is a competitive spirit no one takes it too seriously. 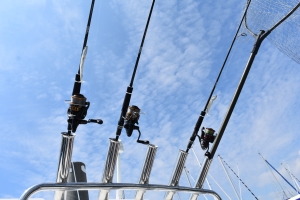 So, because I’ve fished the event twice before I knew how difficult the fishing could be in the waters of Brittany.

The rules are simple: It’s all about bass. The idea is to catch as many bass as possible over 42cms and then take the biggest five, across the Team, and aggregate the length. That would turn into points. In those waters a goods points score would be 250. There are of course plenty of other species who will take lures, wrasse, mackerel, bream and gars to name a few – each of these counted as 10 points – but only one per species. Each team had the same tackle, Daiwa rods and reels and Fiiish minnows. 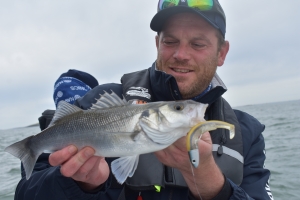 We were first out on a gloomy overcast morning, and the zone was fairly close to the port so it wasn’t long before we started fishing. Immediately I noticed Sjoerd was fishing the lures we’d been given in a different way to the recommended method. Rather than long fluttering sweeps he was keeping it hard on the bottom and twitching it.

The French guide suggested he change this but Sjoerd ignored him and within a short space of time had three bass in the boat….so Jonas and I both switched to this method and although it didn’t work for me Jonas bagged a fish as well. On a difficult day this piece of innovation meant we did very well in heat one. When added to our wrasse jellyfish (yes, they count as well) and pollack we had a respectable score of 188. We could be in with a shout.

This was an afternoon session in a different zone well offshore and around some rocky islets. We urged Pierrick, the skipper and Loic’s son, to get our boat as close to the swell crashing over the rocks as he could, and boy this produced. We located a shoal of bass feeding on the bottom between two pinnacles and while the tide was running, we cleaned up. All of us caught fish, bass, wrasse, and pollack. Fish were smashing the lures on the surface as well and it was a great afternoon’s sport. It was enough to propel us into first place by quite a long way, across the two days. There was no doubt the fishing was much better than in previous years. Now for the final.

Kyle’s team was fishing the Silver finals and you can read his account in the magazine which is on sale from the 21st June. His team fished before us and he was sending regular bulletins to me. After a tough two days for Kyle, personally, he smashed it in the Final and caught a shed load of fish. They got their five sizable and judging from what I was hearing from the other boats they were well out in front. So, I was confident they would win the Silver Final.

We had a plan. We knew the tide window was just 90 minutes before it would slacken and we’d start bagging wrasse. The first hour was critical. Pierrick ‘s and Je Je’s (our guide) plan was to find a specific reef and make hay while the tide ran. It worked spectacularly – first drop I bagged a 5lb fish then both Jonas and Sjoerd caught and, in no time, we had 150 points. Sjoerd then lost a very big fish…. The tide slackened and we stopped catching bass – just wrasse and only one counted.

We knew not a lot of fish had been caught so weren’t confident we would win……but we did and what a feeling that was beating 120 teams across a week. No fluke and thanks to the skills and innovation of by team members.

At the awards evening we all sat eagerly for the results though we could never had imagined what was coming. Team Navionics only went and won the lot! Gold and Silver finals and both teams took to the podium to lift the trophy. We became the first ever team to win both finals and Kyle’s teams 235 points also smashed the silver final as his nearest competitor only scored 164 points. We won the Gold final with 288 points way in front of the next team. It was a safe victory and I think the pictures say it all really, and we all hope we get the chance to do it again next year! 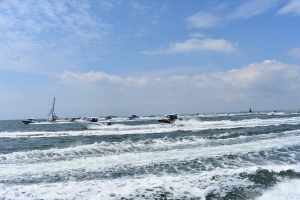 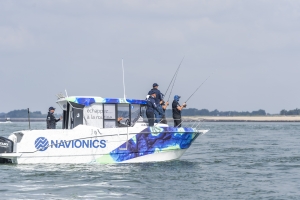 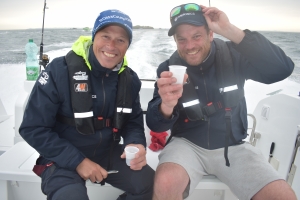 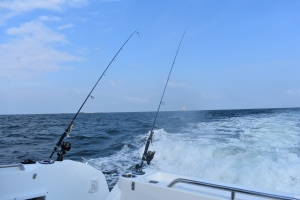 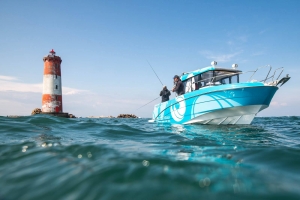 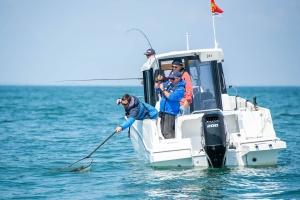