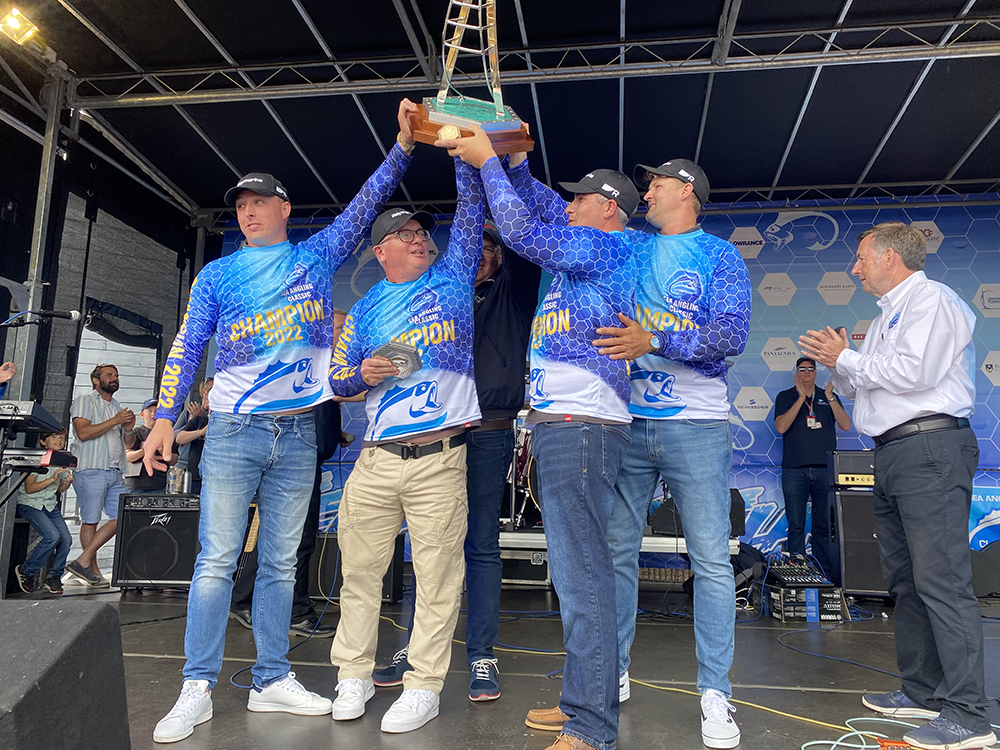 The Sea Angling Classic 2022 ….and what a classic it was

As regular readers of this blog and of the magazine will know I am a great fan of big boat angling events and festivals. We been to and supported many over the years, they bring anglers together and create a real atmosphere and connection among anglers which is hard to beat.

But now there is a big shiny new one on the block – the Sea Angling Classic! It was first trialled about a year ago as an invitational event to test the water. Organised by Ross Honey and his company Angling Spirit, it was held at Northney Marina on Hayling Island and fished in the Solent it provided a useful test run for the main event. It proved successful enough for Ross to go ahead and launch the main event this year. 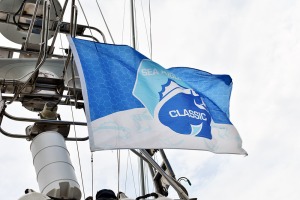 Hosted at Gunwharf Quay in Portsmouth the 2022 Sea Angling Classic has proved to be a great success. 59 private boats entered and 20 Charter boat teams – totalling 198 anglers over the two days of the event. Preceding the fishing was a spectacular procession through the streets of Portsmouth with a marching band and lots of flag waving schoolkids. The event was then formally launched at the Spinnaker Tower by the Mayor of Portsmouth. After registration the following day there was a spectacular parade of the competing boats out into the Solent.

We went out on the boat parade and then observed the competition unfolding from the media boat. I hadn’t been able to watch the first day of the competition but because of the excellent Angling Live app, which the organisers were running, I was able to keep up with the action from my office. 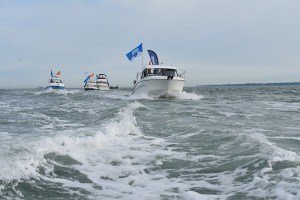 I had a direct connection with one of the competitors having worked with Will Parkinson, skipper of Smart Fish 25, on a number of projects and, as readers will recall, I fished with him at the Mull of Galloway Sea Angling Festival.  In fact, he invited me onto to his team for this event but I was unable to take him up on his offer – a situation which caused some personal regret as people who know the results will understand.

The competition itself was split into two categories - Charter Boat teams and Private Boat teams. The size of the teams was capped at four, some were two, some three. The competition was a catch and release “species hunt”. Each team was tasked with catching three specimens from five nominated species. The teams were judged on which one caught the longest cumulative length over the two days. Pretty simple stuff.

The nominated species were; tope, smoothound, bass, rays (any species) and bream. Each team was provided with a measuring mat and a verification card. When a fish was boated, if it qualified over the designated minimum length, it had to be photographed, correctly, on the mat and then again with the angler holding up the fish with the certification card clearly visible. The photos were entered on an app with one designated team member had on their smart phone.

Once uploaded (or directly photographed using the app) the fish was verified and added to the team score which is shown on the “live leader board”. The beauty of the leader-board is that competitors and others can track the competition as it unfolds.

All fish were released alive. Incidentally the data of fish catches is going to be collected by the University of Portsmouth as part of a research programme. 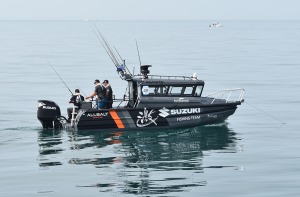 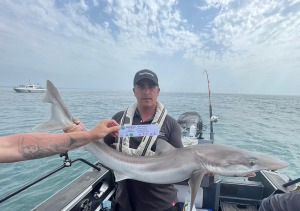 Now to the angling part

During the first day, which benefited from the most glorious weather, I was able to track the catches as they happened from where I was and it became clear that some boats were really doing well including Tequila, Bad Boyz, Paintball and Smart Fish – all of whom eventually finished in the top five.

The boats were scattered across a range of different marks within the fishing zone, Brackelsham Bay, Boulder Bank, Bullock Patch, Cross ledge, The Mixon, the Hole, the Looe and many others including the Forts around the entrance to the Solent. Fish were coming up in a constant stream on day one despite the really hot weather and strong tide. Some anglers struggled with holding the bottom and were using up to 2lbs of lead. Will Parkinson on Smart Fish boated a near 40lb tope. There were some big bass caught – although these were few and far between with only 14 caught across the two days. Smoothound and bream were made up the largest volume of fish - 805 out of the 1067 caught and measured.

It got really exciting on the second day – with a lot fish coming to the boats early on including bream, lots of smoothounds and a smattering of rays and tope. The leader board was switched off at 12pm we could see the unfolding drama on our “media boat” and it became clear that five boats were in contention coming into the afternoon.

Then, suddenly it all just stopped…..the tide, which had been pretty strong all day, petered out and lots of dogfish started to appear. Between 12pm and 2pm virtually no fish were added to the leader-board. You could tell because there were boats starting to move around hunting for fish.

As 3 o’clock approached the boys on Tequilla, anchored on a mark called Bullock Patch, started catching bream and the leader-board tightened up again. They’d adjusted their anchoring position a couple of times to get the right spot. A stingray came on board, although sadly it didn’t count as they’d already had three bigger rays. Will and his crew on Smart Fish went hunting for bass – the previous day they’d found them at one of the Forts closer to the port. Because the leader board was switched off (genius idea) they didn’t know they were in the lead at that stage so had to keep on hunting.

Bad Boyz and Paintball were also hunting hard but fish were difficult to locate. At this point a tope would have won it for anyone of the top five because there was barely 17cms between them.

It got quite tense on our boat, Andy Ford was posting live for the event and BT sport and skipper Steve Porter was helping him follow the action by positioning us near to the competing boats. It was exciting. We had a drone up keeping an eye out for what was happening on Tequilla and the other media boat, run by Andy’s son Ben, was with Smart Fish….trying to keep his distance while hunted for bass.

Then at 3 o’clock, right on cue, the weather turned. The wind got up and it got really sloppy blowing the boats all over the place. Fish were coming in but none of them counted. 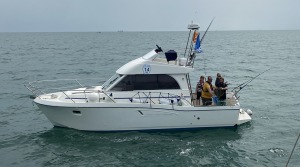 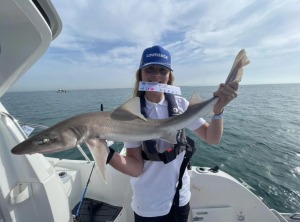 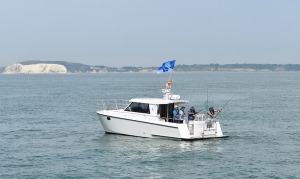 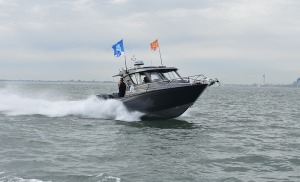 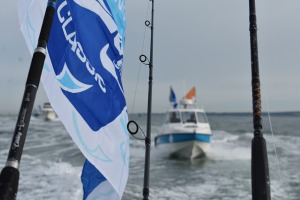 Meanwhile on the Charter Boat section it was also really hotting up. The competitors included a host of really good skippers and boats including Deep Blue, Valkyrie, Kelley’s Heroes, Harvest Moon (who produced the top two charter boat teams), Anglers Edge, and of course the Wetwheels boats taking disabled anglers out. Steve Batchelor and Colin Searles appeared to be running away with it but were put under serious pressure by a number of teams who all finished in pretty close order behind them. Both Steve and Colin are accomplished England internationals (I’ve fished with Steve once or twice on species hunts and let me tell you he is an angling machine……Colin is also a top match angler).

The charter boat competitors were dependent on the boat skipper most of whom were fishing the event including Stuart Newell, Bex Florence, Adam Houghton and Adam Cairns(?). These guys really know the waters and proved it despite, what were at times, the difficult conditions. 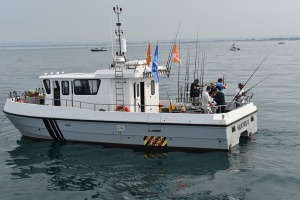 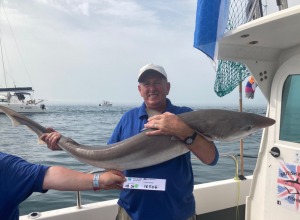 The oldest working shark boat in the UK

One of the boats fishing in the competition is the oldest working shark fishing boat in the UK..the May Queen skippered by Tim Newcombe. Tim brought his entire family with him his kids Anthony and Sky and wife Michal.

They travelled all the way up from Corsands in Cornwall in the boat, it took them seven days and they broke down at least three times. They finished a very respectable 27th amassing 819 points. The two kids also win junior prizes. Amazing story. We’ll be off down to Cornwall later in the year to go sharking with Tim. Can’t wait. 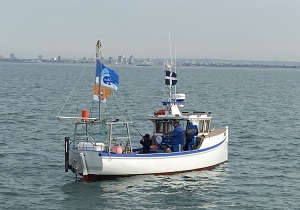 So, the competition ended, and it was a very close-run thing indeed. None of the competitors knew who had won because the app had been switched off at 12pm.This made for a tense overnight for many of the anglers – and all would be revealed at the presentation the next day.

As we all know now the private boat winners were the Smart Fish team, skippered by Will Parkinson fishing with David Loonie, Graham paisley and Aaron Barrett – a stunning achievement considering three of them hadn’t fished in the Solent before – but Will’s local knowledge and a clear plan which they largely stuck to throughout the event was to prove decisive. However, the best story was about the team who finished in second place. Tequilla, skippered by Jon Challinor had two lads of 11 and 9 on board the boat. Joseph and Toby  Challinor fully contributed to the effort and having watched them fishing over the course of the day a few times I can vouch for their abilities as anglers. The fourth angler on board was Kelvin Hindmarch. The four of them had their own plan and it certainly worked well. They were from Newbury, had only been fishing the Solent for a year or so and will certainly win more competitions in the years ahead.

Paintball who came in third came all the way from Dartmouth to fish the event were only 1cm behind Tequila – astonishingly close.

In the Charter Boat category England Internationals Steve Batchelor and Colin Searles won the main prize and walked away with a pile of tackle prizes and a fully paid up angling holiday in Finland courtesy of event sponsor Okuma.

The winning recreational team were presented with the £120K boat from Extreme 745 Game King with a twist. They could instead take £50k on cash. Will and his winning team opted for the cash, partly because they all had boats of their own and part of the cash prize was donated to Will’s Firefighters Charity project.

Well done to Will and his team

All in all, the whole event was organised really well, the presentation was spectacular and with 198 anglers and 59 boats the event has certainly lived up to the expectations of competitors and organisers and we can now look forward to the 2023 event.

In addition, the fishing there were other initiatives surrounding the event, each team had to undertake a beach clean-up or litter pick before the competition while youngsters were encouraged to try fishing for the first time courtesy of the Angling Trust whio were running angling taster sessions at nearby Southsea and there was also a crabbing competitions. Associated conservation and scientific projects in and around the Solent were also a key part of the concept.

The prizes for the longest fish

Sponsors and supporters of the event included: