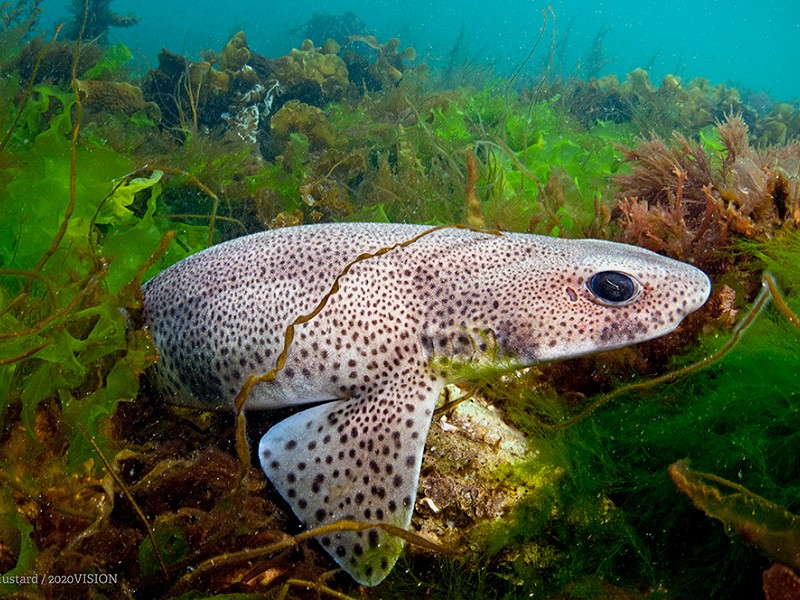 The government recently released The Benyon Review into Highly Protected Marine Areas. It was the result of a nearly year-long informal consultation process involving all manner of marine stakeholders, including anglers – its objective was to answer the following questions:

The review, which identifies 46 sites which could become Highly Protected Marine Areas, was set up with a panel of “stakeholders” including scientists, conservationists, and representatives from dredging, energy and the commercial fishing lobby. 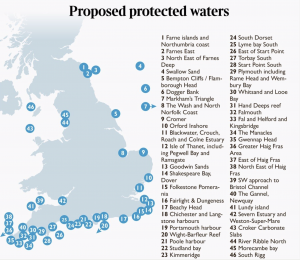 Something missing here? Yes, no recreational angling representation (although the Chair and former Fisheries Minister, Richard Benyon, is an Angling Trust Ambassador) which is astonishing, a ridiculous omission considering that anglers are likely to be most affected by any curtailment of activity.

Every other stakeholder group is represented. So despite the overwhelming evidence that angling is the biggest driver of economic activity in coastal towns around the UK, contributing according to their own figures £870m a year to the economy, the panel will have no direct input recreational angling and therefore no idea how it might be affected by their decisions.

Having ploughed through the report, which also presents the views of wider stakeholder groups (this time including anglers) that were informally consulted in 2019 (and because of the election never actually completed) I am struck by how few mentions recreational angling actually gets in the 100 plus pages. I was also dismayed that, despite the Angling Trust and the Angling Trades Association submitting lengthy responses to the formal online consultation, littered through the text are comments from all sorts of stakeholders but oddly not one from anglers or angling groups. Running through the recommendations is a thread which is suggesting the sites should be no activity zones. Something which will alarm, not just anglers, but also other marine users. 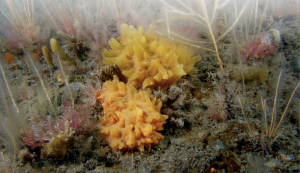 You have to wade through to page 66 to get any direct reference to angling, and here’s what it says.

“During the site visit to Poole and at round-table events, the Panel heard that most sea anglers operate a catch-and-release policy. By operating this policy and others, such as gear modifications and fish handling techniques, the sea angling community is taking steps to minimise its environmental impact. However, capturing fish, even if not fatal in the first instance, will reduce the life span of an animal if captured repeatedly. The effort expended by the fish in the process may leave it exhausted and vulnerable to predation. Moreover, depending on the time of year and location, angling may negatively impact breeding behaviour despite a range of reported post-release mortalities. As a result, catch-and-release angling is likely to have an impact on the health and mortality of fish and therefore conflict with the goals of HPMAs.

We do not believe that angling (catch-and-release or otherwise) is compatible with HPMAs. This is not to say that sea anglers will not benefit from HPMAs. Evidence suggests that angling in areas adjacent to HPMAs can deliver spill-over benefits to recreational fisheries145. The co-management of these adjacent zones could develop partnerships between recreational sea users and management bodies to undertake monitoring and collect scientific data.”

I have highlighted three sentences within that passage. I was at that consultation and while I and other anglers did highlight the general catch and release policy most anglers practice there was no detailed discussion about this and certainly nothing much about post release mortality and the effect angling has on fish breeding. That is apart from a rather dismissive comment from one scientist when I mentioned how there is little evidence available to make a judgement.

The highlighted statements are at best highly unprovable and at worst dismissive of anglers and their opinions. There is simply no firm evidence for either.

The third highlighted line suggest that they have already decided, without evidence, that angling will have to be prohibited from these sites. This is, to put it mildly ridiculous.

So, what will the consequences be and what can anglers do about it?

Since they were unable even to recommend pilot sites (because of COVid-19 restrictions) it is effectively incomplete. There are no concrete recommendations about what these sites should look like apart from some vague definitions like:

“Five pilot sites are the bare minimum and to cover different environments and activities, the number of pilot sites should have sufficient geographic spread to cover nearshore, inshore and offshore areas and different regional seas.”

Pilot sites should cover a range of different marine environments and be situated in the nearshore, inshore and offshore.

They should not be in intertidal areas due to the additional complications associated with governing and regulating the marine/terrestrial interface and its users.

They should be geographically spaced around Secretary of State waters. This geographical spacing could be done through using the bio- geographical regional seas or using Marine Plan areas.

Achieving this spread requires more than the minimum five pilot HPMAs prescribed in the Terms of Reference.”

Which, to be polite, is pretty vague waffle.

So, in the short term the consequences are likely to be nothing much BUT if this report is followed up and pilot sites are selected then anglers will face an uphill battle to prevent us being banned from using the areas.

what the review proposes as allowed activity inside HPMA’s 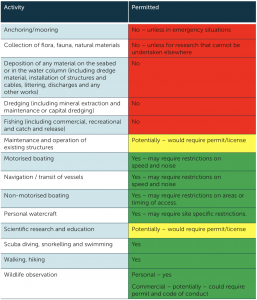 The Angling Trust has already responded to the Benyon Review and to summarise I would highlight the following points.

The Trust welcomes HPMA’s mainly because successive governments have allowed commercial over-fishing to drive down fish stocks to unsustainable levels and failed to effectively manage important habitats for fish and other wildlife. The piecemeal way MPA’’s and MCZ’s have been implemented is an illustration of this. Sea angling generates such considerable economic value to UK coastal communities it is short sighted to exclude angling groups from decisions taken about the management of our seas upon which our sport depends (which is what appears to have happened in this review).

The recommendations of the Benyon Review are deeply flawed, not least because a blanket ban on recreational fishing in all HPMAs and the wholly unsubstantiated claims that the impacts of rod and line fishing are comparable with extractive, commercial exploitation such as dredging, trawling and drilling.

There is plenty of evidence from around the world that best practice should have angling at the heart of these decisions, this also includes ways that that will deliver marine conservation objectives, improve stakeholder engagement, reduce economic damage to coastal communities and provide a network of willing volunteers to aid compliance and assist enforcement. Given the lack of meaningful enforcement around our coasts the presence of anglers in and around the HPMAs would be an aid to ensure compliance and report transgressions.

It’s also true that evidence from elsewhere show attempts to impose restrictions on angling pushes anglers in to a position of hostility toward conservationists and environmentalists. Most anglers recognize and support environmental action to reverse habitat and fish stock decline. We need recreational anglers to fully engage in promoting policies and programmes that benefit the aquatic environment on which our sport depends.

A key point is that whilst there may be an evidence-based case for a ‘no-take’ component in part of some of the new HPMAs these could be surrounded by recreational fishing only zones, as is the case elsewhere. This would enable anglers to benefit from any spill-over effect which would otherwise be hoovered up by waiting commercial fishers.

The panel has completely misrepresented the conservation benefits of catch and release (as I have demonstrated above) and made no reference to other good fishery management practices that would further minimise the slight impacts of recreational fishing.

It should be possible to build wide support amongst stakeholders for the Angling Trust position which has always been to accept the need for HPMAs in principle but to argue in favour of USA-style multi-use MPAs which allow low impact and recreational activities and which protect fish stocks and restore seabed habitats.

The detailed, 20-page response from the Angling Trust can be found here www.anglingtrustcampaigns.net

The press release of the review summary the government sent out contained a map with all 46 sites on it. This, understandably, alarmed anglers from all over the country as it appeared that angling would be banned just about everywhere – wherever you did your fishing.

But, on closer inspection of the report, the panel have recommended that these HPMA’s should be contained inside existing MCZ’s and MPA’s which suggests that, for the most part they’ll be potentially small areas and within designated zones which have already got a degree of management.

In my view this report has got “bottom drawer’ written all over it. It’s an exercise that started in good faith, but which is likely to run into the sand for a variety of reasons – not least that the current government has shown no inclination to be interested in environmental issues – quite the contrary – which is a shame.

I have always supported the idea of setting up and managing “marine protected areas” partly as a way of slowly restricting damaging commercial fishing practices (trawling, scallop dredging, drift netting etc..) jn our waters but the way this report has been put together suggests this is just another eco box ticking exercise which is not achieving the objectives it set out to do. It is also likely to alienate recreational anglers, the largest stakeholder group in terms of number and economic value, for reasons we can only assume are due to commercial pressure. Anglers are also likely to feel that the people who compiled this report, including scientists and conservationists, have shown a complete lack of understanding of what recreational angling is all about and what it contributes to the nation.

What is also striking is if you refer back to the objectives set out in the review not one of them has been satisfactorily answered. Granted, Covid 19 scuppered selecting pilot sites but the other four objectives are only partially answered.

I’m not anticipating much movement on this in the coming months but we’ll be keeping an eye on it – and certainly when they eventually choose the pilot sites we can see which way the wind is blowing.