Now we’re coming out of lockdown Simon Everett was able to sneak straight out and run the rule over another new inflatable rib on the market. 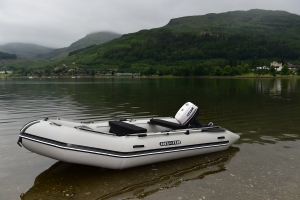 One of the major attractions of a SiB is the affordability of them, because the cost implications of a boat don’t stop at the purchase. Mooring or storage, servicing and general upkeep and insurance have to be considered. A well found inflatable and modest outboard can be stored in a corner of the garage. Portability and seaworthiness can now be found together and they can come in a package small enough that it will fit in the boot of the car.

The WolfStar range are making a big name for themselves in a short space of time since being launched in the UK at the 2019 Southampton Boat Show. These boats are built tough and practical. The smaller, lighter, Caiman range would suit most situations, but if you require more seakeeping and payload then choose from the Killer Whale range. We had the 3.7m out to test as it fits favourably with the most popular size of SiB, if you need more room, there is a 4m or even a 4.3m.\

The Killer Whale has larger tubes, the bow is higher, the beam increased and the keel given a slightly deeper vee. The design brief was to be able to take on more arduous conditions and it is aimed at the commercial market as well as adventurous privateers. One would think the greater wetted surface and higher weight would have a much more noticeable impact on the performance, but in practice we found this was minimal for normal boating. Of course, we didn’t achieve the same speed, but then the smaller boat didn’t benefit from the additional stance.

For practical portability 15hp really is the limit for carrying an engine any distance. We used the same engines on the 370 Killer Whale that we used on the 335 Caiman; the Selva 8hp twin and the 9.9hp single cylinder. She was marginally faster with the 9.9 but very noticeably more frugal. Of course, a 15hp would make her faster and maintain speed when carrying more load, but for private pottering the 15.8 knots we wrung out of her with the 9.9hp is not that far adrift from what the little 335 did. If you are happy with 2-up cruising at 10 knots then either rig will provide that. My preference is for the 9.9hp single cylinder, it is appreciably lighter than the twin cylinder 8hp and only uses about 70% of the fuel, despite being more powerful. 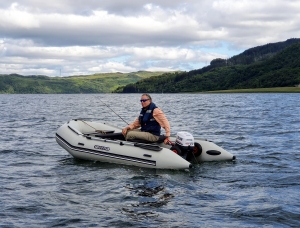 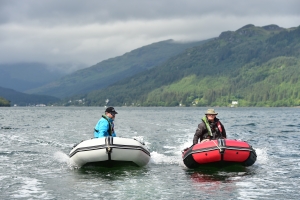 The WolfStar range are built from a 5-layer laminate of 1080g PVC heavy duty material all over, with additional wear patches on critical points, so they are extremely rugged. The tube diameter is matched to the size of the boat, as the boat increases in size, so does the tube diameter and the beam. Each of these inflatables is individually designed, they are not simply stretched versions of the base model.

A flat, rigid deck gives a more secure ride in choppy conditions than a fabric or inflated deck. It does add weight, especially if aluminium, plus they can be a bit of a fight to fit. On the Wolfstar boats these problems have been successfully addressed by using encapsulated birch-ply for the deck boards and the bottom to tube attachment has been optimised for fitting the removable rigid deck.

Ready for the water in ten minutes

Birch-ply is an environmentally friendly material, it is lighter but nearly as stiff as aluminium and is nearly as durable. Fitting is an absolute doddle, rather than a fight, with handles placed in the correct position and the bottom fabric attached to the side of the tube, rather than the bottom, to rigging easy. Literally, it takes just a couple of minutes to put the boat together and with an electric pump a few more to inflate the chambers. You can pull into the car park and be ready for the water in 10 minutes without rushing. It would take you that long to prepare a road trailer for launching, so it isn’t actually any more faff, it is just different faff.

The deck boards, although light weight, they are rigid enough to provide the hull support needed and the non-slip aspect of them works really well, even when wet from beach launching with wet feet dripping all over them, far better than the sloping fabric of an airdeck. For those concerned about the ecological footprint, the argument for birch-ply over aluminium is overwhelming, wood is one of the most environmentally sustainable materials that has been proven over many centuries of boatbuilding. 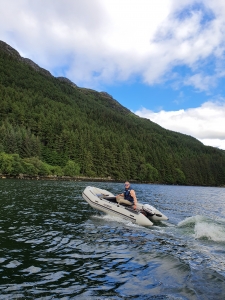 Once afloat the WolfStar displays great pedigree. The high bow provides plenty of wave protection and lift, the wide beam gives great stability and the larger diameter collar keeps the spray under control, along with the spray deflecting rubbing strake all round. These features were later put to the test in a force 5, whipping up a nasty chop with the tops getting blown off the peaky waves, but I stayed mostly dry. The little boat was able to run at cruising speed quite comfortably with the combination of inflated keel and seats taking the shock out of the ride. Only the very highest spray was thrown in my face from the windward side, through exuberance, with the boat riding or buffeting each wave perfectly happily. Directional stability was good with the sea on any quarter, she never dug in or slewed off course on a wave because of the modest bow shape and the extra deadrise at the stern, this prevents the stem digging in and causing bow steer, which is something to watch for on some inflatable keel SiBs. This hull profile is very similar to the D-class inshore lifeboats, providing good control in wave conditions without needing the extra power required to support a really deep vee, which is why she goes so well on modest power. As a test it was probably as rough as anyone in the market for a boat like this would want to be out in, but there was so much more in reserve, if not in the speed stakes which was limited by the horsepower available, but in the wave riding ability.

A 15hp outboard would give you more performance and the ability to plane easily with more weight aboard but it is a heavy lump to lift in and out of the car. This is where the Selva 9.9 Piranha really comes into its own, at just 32.5kgs with electric start it is in a class of its own and really isn’t as lumpy as most people would have you believe. 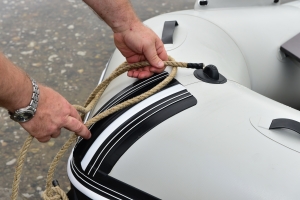 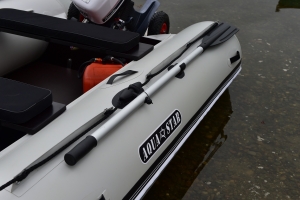 The features on the boat are well thought out and the handles are well placed. Wheels are available to aid with launching and recovery, removing the need for a trolley. There are spray webs between the transom and cones, grab lines and a fairlead on the bow for anchoring. The stern has an internally fitted drain with a slider to lift to open the scupper. The oars are held captive alongside with the shafts clipped into rubber stays to keep them tidy, but at the ready. The keel and the bottom of the tubes are fitted with wear protection strips for longevity and there is a protection strip along the topside of the transom plate too. 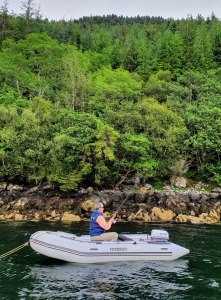 For fishing I would use the fixed forward thwart and one of the main thwarts with the stowage bag. This would provide plenty of room for two people to fish comfortably. As a fishing platform the Killer Whale is excellent, the broader beam and greater shelter the larger tubes provide will make it usable in a greater range of conditions than the smaller and lighter Caiman. It would be a hard decision to make between the Killer Whale 370 and the Caiman 365, for more than one person.

The two main thwarts slide along rubber rails making them infinitely adjustable according to payload and conditions. My only grip is there is no locking mechanism to hold the thwarts in the chosen position and they did creep when underway in the choppy conditions, to be fair this is the same on every make of SiB with this kind of mounting I have tried.  Some kind of clamp that could impart some pressure on the rail to hold the thwart in place would be ideal. It is a small gripe on an otherwise well thought out boat that will provide years of entertainment and exploration and is warranted for 5 years at a price for the package that is less than the cost of a modern kayak.  No wonder so many people are getting into SiBs. 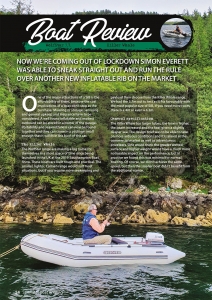 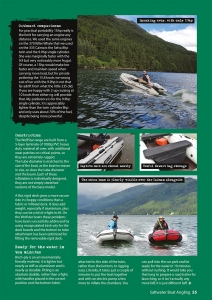 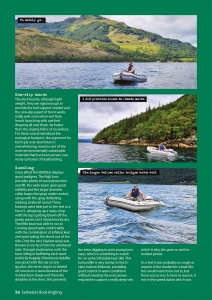 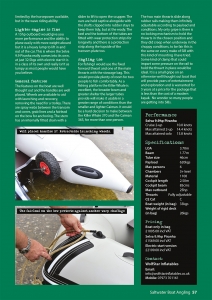