In his final diary entry Sam Wadman describes the end of the season and looks back on the year so far on the Wild Coast. 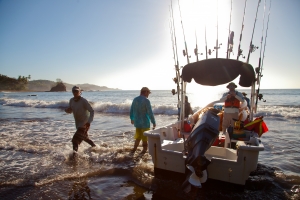 Our fishing season in Panama has now come to an end and I’m back in the UK catching up with friends and family, and finally enjoying a nice cup of tea! They say time flies when you’re having fun and it certainly rings true on this occasion; It’s been an amazing adventure out in Panama for the last 6 months, it’s just gone so fast!

I have been keeping a diary throughout the season and it makes for fascinating reading. I’m glad I took the time to do it every day as the information is sure to prove very valuable in the future. At a quick glance, I can tell you that between the middle of December and early June we hosted 17 groups of anglers back to back. These groups consisted of 87 anglers from 12 different countries around the world. We had our first guest all the way from Australia this season too.

We fished a total of 90 days at sea and in doing so managed to catch 41 different species of fish. The biggest fish we caught was a black-tip shark on a popper, estimated at around 150lb. We didn’t get blown off once; the amazing location we have nestled at the foot of the Cerro Hoya Mountain range provides us with such excellent shelter. We are very fortunate indeed. 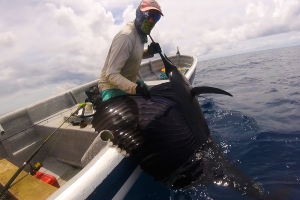 The best achievement of the season was, without a doubt, the big pacific sailfish that Gerard Bultink from Holland caught on a popper. It’s a first and a little piece of kayak fishing history as far as we’re aware. The chances of them staying attached are so slim but he had luck on his side that day. It was a great moment!

The roosterfish and cubera snapper are our bread and butter. They are always a challenge and this is what is so appealing about them. We are certainly in one of the best locations on the planet to target these impressive creatures and have witnessed some spectacular catches throughout the season. This is what people come here for and many returned home having ticked them off their bucket list in style. The ‘Cubera wall’ in the Lodge is looking very impressive right now!

The Final Weeks of the Season

The reason we fish December to June is to avoid the wet season, the electric storms and the worst of the swell. It’s not much fun for anyone and ultimately, safety comes first. This season in the middle of May we encountered swells of over three meters and this posed us a few problems. 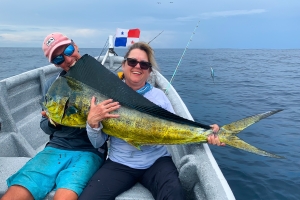 There had been some extended typhoon action in the western Pacific and this was the cause of the enormous waves. Totally unexpected, and out of season, the huge swell lasted nearly two weeks which left us effectively stranded on the beach. It just wasn’t possible to safely launch the boats for the transit in to camp or to fish.

In the seven-year history of the lodge, we have only ever had to cancel two groups of guests due to large swell but this affected two groups back to back for us this May. One of the groups was already in Panama so we moved them round the peninsula to Pedasi on the other coast and organised a week’s boat fishing. The other one, we rescheduled for next year.

The guys that we took round to Pedasi to fish from the Pangas actually had a great week and we found stacks of dorado, jacks and some sailfish to entertain them. So everything worked out ok in the end despite mother nature throwing a wobbly! 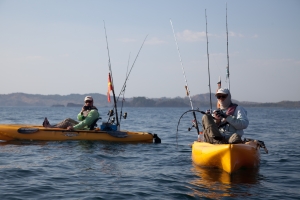 This week we welcomed a bunch of serious, hardcore, anglers from the UK to our remote jungle fishing paradise on the Azuero Peninsula. Ian, Ben, Ed, Kieren and my brother Jamie took to the kayaks and joined us for an adventure like no other to see if they could come face to face with some of our stunning resident fish.

These guys gave it their all. Non-stop, pop, pop, pop! They fished their hearts out. They never gave up. The seasons are turning and we had the most stunning backdrop to fish against; everything is green once again after the first rains of the year. The Wild Coast is looking superb right now.

There were huge amounts of bait around; like we have never seen before. The smell of fish oil was in the air and there were slicks rising to the surface of the water continuously as some serious slaughter was going on below us.

With that much natural food around, the fishing was a little tricky. However, there were rewards to be had and our guys enjoyed some serious action. The tuna fishing was on fire at times and we had our first quadruple hook-up on their first afternoon! There were a good variety of other species taken throughout the week with some particularly fine specimens of mullet snapper, blue trevally and pompano giving excellent sport on the artificials. 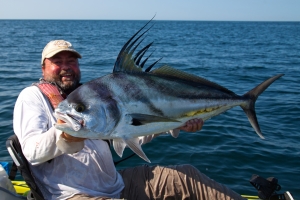 We managed to find a couple of stunning roosterfish one afternoon that took a liking to our blue-runner livebaits and my brother, Jamie,made his dreams come true with one of the most stunning looking fish of the season. Not bad for his first time ever kayak fishing. Well done that man!

The highly sought-after cubera snapper made their presence felt during the week and gave our lure anglers a few good opportunities. Unfortunately, as is often the way, they got the better of our anglers on this occasion. Hooking and then boating these incredible fish is never easy!

The lads certainly have a little unfinished business here on the Wild Coast. We don’t think it will be too long before we see them again. They were a pleasure to have in the camp and their positive dedication to the fishing was great to see. Another week all done and dusted here in fishing paradise.

This week we had the pleasure in welcoming for his fourth time Mr Danny Viscardo from New Jersey, USA. Danny is a real character and runs a theatre on Broadway in New York. This time he brought with him three newcomers to the Tembladera Fishing Lodge  Bill, Paul and Chichi. We had a fantastic week both in terms of fishing and excellent company!

The guys are all experienced kayak anglers and specifically wanted to catch tuna. Late season is excellent for tuna which is why we booked them in when we did; they were not disappointed. Opting to fish offshore the majority of the time, the guys found stacks of tuna willing to smash their lures. There were many fish in the 10lb to 40lb range which are excellent fun from the kayak. 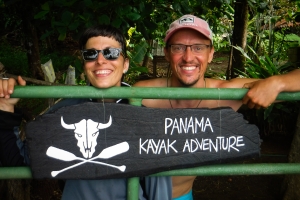 On the last day, fishing well offshore, Danny hooked an absolute monster of a tuna. From the way it was going it more than likely would have been the biggest of the season. Sadly, the hook pulled after a few minutes so we’ll never know for sure. He was very unlucky, but that’s fishing. You can’t catch them all.

The guys had their fair share of roosterfish action during the week as well. Using lures and also bluerunner livebaits everyone got their strings pulled by these powerhouse fish. On top of that there was some good sport provided by rock snapper and of course the ever- obliging jack crevalles.

The surprise catch of the week was for Danny. He managed to latch into a huge stingray of around about 100lb. We’ve caught a few of these this season and it seems that they really do go for the jig. All of them have been hooked on the underside, either in the mouth or just by it. My theory is that they see the jig fluttering down and then settle on top of it, getting hooked as the angler then makes the next pump of the jig. The others have been in the 30 to 50lb class but this one was a goliath! A great way to close the season.

This brings my Panama Diaries to a close for the season. I hope you’ve enjoyed keeping up to date on all the latest action from the Wild Coast. We will be opening again for business in December of this year and are nearly fully booked already, it looks to be another busy year ahead.

If you fancy joining us for some world-class kayak fishing, and the trip of lifetime, we still have a few available spots in December, April, May and June. Get in touch to find out more details and dates. Tight Lines!