The Snowbee Big fish final was fished out of Poole this year and Jim Whippy went along with Editor Tim Macpherson to make sure it all ran smoothly. 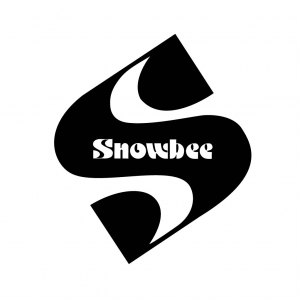 To qualify for the Snowbee Big Fish Final readers had to send in a picture of their recent catches from which six would be drawn out, one a month from June to November. Their prize was to join Tim and I on a fun day fishing with Ryan Jones, who skippers his most impressive charter boat ‘Ocean Runner’ and hope to catch the biggest fish on the day. The lucky winner would win a top of the range Snowbee 7’ 6” Charter boat rod and Deep Blue 10 multiplier, while all the other finalists collect a Snowbee 7’ 6” rod and goody bag including rig wallet, lures and hat, etc.

Six became sevenAs the anglers gathered on the boat alongside the Poole Sea Angling tackle shop, situated right on the quay opposite the Thistle hotel, I began checking them off the list. While I was busy familiarising myself with names to faces, John Dean came up and introduced himself. As he wasn’t on my finalist list I assumed he was crewing for the day. After a very confused conversation he assured me he was fishing the final. It was at this moment that Tim sprang into life and exclaimed “Oh! You are the one I couldn’t contact! Apparently, Tim had sent text messages and tried to phone John without success and had drawn another reader out to make up the numbers. In the meantime, John had contacted Ryan to say he would be fishing, thinking this would be sufficient. It was quickly agreed to carry on with seven finalists, although it meant we were one prize short, but that could easily be sorted, at a later date. 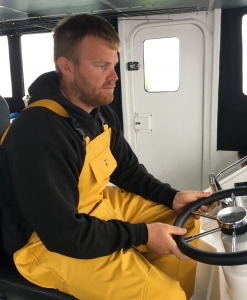 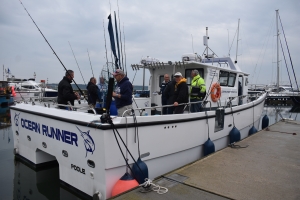 Ryan Jones is a young skipper making a name for himself in Poole, skippering one of the most impressive charter boats I have been on in the UK. The 12 metre catamaran has so much room, our seven finalists had loads of space to fish in. Ryan suggested fishing four across the back with the other two have a side each to themselves. The intention was to go for blonde rays to start with as the tide was easing to high tide. We were hoping to fish a wreck for part of the tide and finish up with a few drifts for bass. It was to prove a difficult day for both skipper and anglers as things just didn’t work out as planned. In the morning the tide eased off as a cold breeze picked up, moving us off the ray mark. The fish just weren’t feeding even after we moved to a large wreck that was showing plenty of fish marking on the sonar.

It wasn’t until we re-anchored on the other side of the wreck, despite Ryan working like mad to find our finalists some fish, that things started to improve. After a run of big pout, the first fish of any note fell to local man Chris Cooper, it was a tiny conger. Another small conger fell to Ex Brighton charter skipper John Stoneham soon after and everyone got on high alert. By now the tide was beginning to run hard and a few hook ups were lost as the congers got back into the wreck. Malcolm Barker, who fishes out of Brixham, hooked what looked like a good one but couldn’t bully it out of the metalwork, eventually breaking off. Shoreham based John Dean went about his congering with a certain confidence and was sure he was going to get one. He was right, as he pulled in a conger just under 10lbs that put him currently in the lead.

Surely a fish under 10lbs wasn’t going to win the biggest fish competition. John Nicholl, who qualified for the final with a big conger and Tony Petras, who was making a holiday of his trip to Poole, were trying desperately to nail a decent conger but with just 45 minutes to go it was the experienced Isle of Wight angler Alan Deeming who found the winning fish, a conger eel of 14lbs. Alan had brought a big multiplier reel and a heavy rod with him and that was the secret to his success, as he managed to drag the fish out of the wreck and cope with the very strong tide that was running. With time nearly up Ryan took us for a few drifts on the bass mark but none of the seven finalists hooked up with a bass. It was just one of those days that skippers hate, and Ryan was left scratching his head. Mind you the next day he got amongst some really good bass, proving it wasn’t him but the fish having an off day. 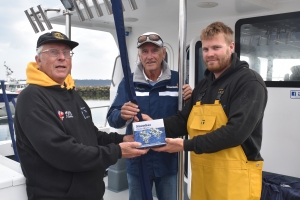 As I mentioned earlier I was so impressed with Ryan’s boat.

‘Ocean Runner’ is a Catapult catamaran measuring 11.9m in length and boasting a beam of 4.88m, providing anglers with a spacious and very stable platform, even in the choppiest of seas. She is comprehensively fitted out with ample rod storage, live bait tanks and a large bait station. Twin 450hp Iveco’s turbo diesel engines give the boat a top speed of 28 knots. On board amenities includes an oven, hot water boiler for tea/coffees, hot and cold running fresh water, a microwave and fridge, easy accessible flushing electric toilet with sink and shower. Skipper Ryan Jones, is a certified RYA Yachtmaster.