Sam Wadman with a the second of his panama diaries and this month he takes us back to January and detail some incredible catches from the ‘Panama Kayak Adventure – Fishing Lodge’. It was an exceptional month for us. Read on to find out all about it! 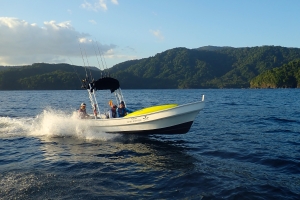 Greetings from Panama once again! What a couple of months it has been. I hope you have all managed to survive the lockdown and quarantine process, emerging fit and well the other side and in good health. It seems restrictions are easing slowly around the world and most of us are back fishing again. Thank goodness! Make the most of your time on the water and enjoy it, we must never take it for granted.

We had a really nice bunch of guys in the lodge this week. With faces from the UK, Canada and the US and a range of ages from early 30’s through to 75, they were a good mixed bunch with different fishing backgrounds and levels of experience. This always makes for a good group, they all got on famously and we had a good laugh from start to finish enjoying our six night adventure along the Wild Coast. 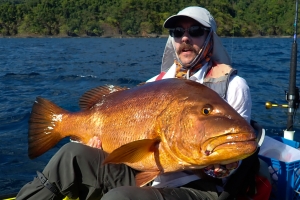 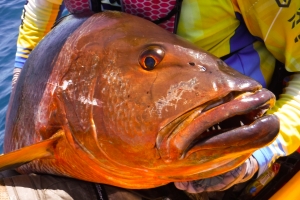 There was loads of bait around which, is always a good sign, and the first day in particular was crazy. This fired up the cubera snapper big time and they were smashing baits left, right and centre. As always, they are the Houdini’s of Panama’s Pacific Coast regularly making their escape without finding the hooks. However, they didn’t all get away with it! We caught a monster of around 60lbs, by far the biggest we have seen at the camp for a good couple of years. What a fish and what an experience for Cez Simeons from Dundee. Excellent angling!

The roosterfish were not quite as prolific as the previous week where we found large numbers of small to medium size fish willing to hoover up our jigs. Those that we did manage to track down happened to be a much better stamp of fish. The best of the bunch were found by two of our guests, Scott and Dan, who had a couple of real crackers between them. This week the fish were again holding deep, but instead of our jigs they were showing a preference to bonito live baits instead. We are on the cusp of seasonal change here, awaiting the arrival of the cold water upwellings. As such, the water temperature is very high at the moment which we believe is keeping the fish down deep. As soon as the upwellings start we expect the top-water bites to improve dramatically. 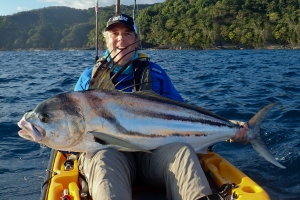 Not only did Scott and Dan get into the roosters, they were also ticking off other bucket-list species in style. Scott fished with us last season and lost a big cubera right by the kayak after it slipped the hook of his jig. This year, he got the specimen he had been thinking about for 12 months straight. A lovely cubera Snapper caught on a live-bait from one of our offshore reef spots. He learnt so much last year and all his hard work paid off this time round. He has earnt his place on the ‘Cubera Wall’ at the lodge in style. Amberjack have been a bit thin on the ground in the last couple of seasons, compared to previous years. Fishing is cyclic and its always interesting to watch how things change from year to year. After the incredible 70lb fish from the precious week we discussed the possibility of it perhaps being a good year for the amberjack again, everyone loves catching these incredible fish! It might just be the case too and Dan proved that by catching a very nice specimen in the 30lb class from one of our seamounts. We’d love to see them make a comeback this season, they are great sport on the jigging tackle! Yellowfin tuna made a few appearances also this week with fish in the 20lb class providing some delicious sushi with many thrills for our anglers on top-water. There were some huge jacks mixed in with them which always give a great account of themselves. 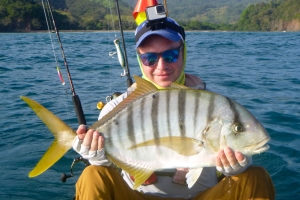 As well as all these more popular species, the guys managed a tally of 20 for the week including some rather unusual ones such as guitarfish, pacific box fish, creole fish and hammerhead sharks up to 40lb – we had three of them during the week! Blue trevally and rock snapper were quite numerous with pompano, jack crevalles, small groupers and snappers mixed in for good measure. It was a good week! As the cold water arrives we expect the fishing to keep improving.

Big tides on the back of the waning super blood wolf moon combined with a strong ocean current made things tricky for our anglers from Canada, USA, France and the UK, the fishing was a little patchy. We often find it like this when a huge current kicks in, but it rarely lasts for too long.

Our annual migration of jack crevalles has arrived and combined with schools of football size yellowfin tuna and a few mahi mahi; these beauties have provided some fantastic top-water action! With tackle crunching smashes and water erupting as fish competed for their poppers our anglers enjoyed this very much. At times, some of them were catching up to 20 fish in a four-hour session.

Great variety
The jigging was productive at times when the current eased and allowed a good presentation. We were finding golden trevally, various popmano species, almaco jacks, roosterfish, triggerfish and snappers. There was some excellent variety this week which provided some grade-A fish for the kitchen back at the lodge.

This week our anglers were not so keen on trolling live-bait, finding it a little boring. They much preferred the more active style of lure fishing. When persuaded to try with live bonitos there was some action found though. As always, the cubera were on the prowl and everyone felt the force of our big red angry fish with Josh from the US catching the only one of the week and becoming yet another addition to the ‘Cubera Wall’ at the lodge. Veronique lost an absolute monster that was just too much for her to hold on to in the end….that’s fishing for you! There were a lot of sharks bothering our live-baits too! 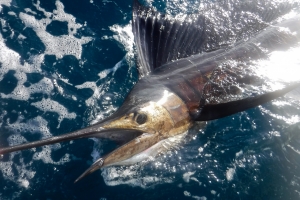 This was a week that will forever go down in the history books for us at Panama Kayak Adventure. We had a team of six hardcore anglers from the UK in the camp with us and they were treated to some of the most incredible world class kayak fishing you could ever possibly imagine. All the stars aligned for these guys with perfect conditions, a favourable ocean current, stacks of bait around and huge numbers of fish inshore. It was on fire! 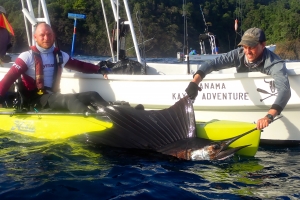 The highlight of the week was undoubtedly the huge Pacific sailfish that honoured us with their presence. The amazing ocean current we had brought the billfish close to shore and we saw a couple of marlin as well as the sailfish. To catch two of these amazing creatures in two days from just two bites are pretty incredible statistics when you think about it. Especially when fishing from a kayak. The sailfish gave us all an incredible show, leaping many times and thrashing the water to foam.
The one species all of our anglers really wanted to catch was the cubera snapper. As luck would have it, we are just a few minutes run from some of the best spots on the planet for catching these incredible fish. Luckily for the guys, they were on the feed….big time! We experienced some incredible sport from these most impressive fish on top-water lures, jerk-baits and live-bait. They were smashing everything in their paths this week. The most impressive capture of the week went to Ben Wallis who caught a real bruiser of a fish well over the 50lb mark on a lure in very shallow water. A fantastic achievement! 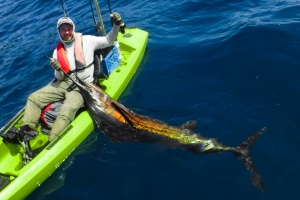 As well as Ben’s mighty fine fish on the lure, our anglers managed to tease another seven fine trophy fish from our waters. We are usually happy if we manage to catch one or two cuberas in a week but to get eight was totally mind-blowing and obliterates our previous lodge record. The fishing goes from strength to strength the more we discover and learn about our fascinating fishery.

The roosterfish weren’t as thick on the ground as the cubera snapper but we managed to find some beautiful fish for the British lads. Some excellent fish on both lures and bait. Mark Radcliffe, a regular in this magazine, managed a real beauty on the popper which in our eyes has to be one of the top experiences in the fishing world. When a big rooster starts chasing down your popper it’s very hard to keep your composure and cool….but you must! Mark did a great job and was rewarded with his first ever rooster on top-water….a fine fish it was too!

Besides smashing our lodge records and boating huge numbers of trophy fish the lads managed to notch up a whopping 28 species between them while out on the kayaks. There were some excellent moments during the week and it was a pleasure to guide the lads to their goals and successes. Our hard work combined with their tidy angling skills, great conditions and of course a little bit of luck was the secret of what was a successful week.

As always, a trip with us at Panama Kayak Adventure is all about teamwork. Teamwork between the anglers, the guides and our captains…..this week we nailed it. We will not forget this special week for a long time. It’s about as good as it gets. It’s so rewarding to see our guests go home with huge smiles on their faces – WOW!

I’ll be back next month with some incredible action from February. 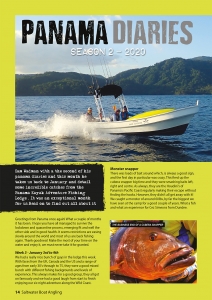 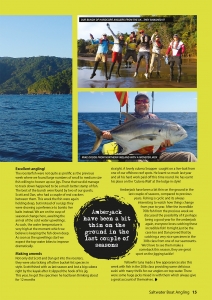 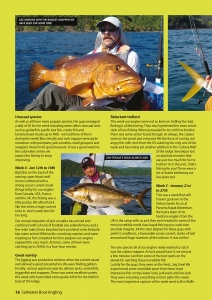 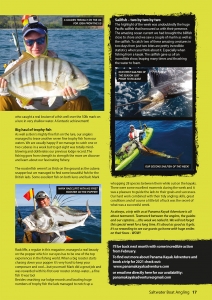