Tim Macpherson looks at one of our favourite sport fish: the black bream

One of my favourite summer fish, when you hit a shoal of these beauties you can have some great sport. They’re not huge but pound for pound they can match any fish for fighting quality.

Bream are, by and large, a shoal fish and when you find them they will attack baits with vigour and often in numbers. They have small mouths and sharp cutting teeth which means that small hooks are best, with relatively light tackle. Even when fishing over a wreck, you don’t need heavy-duty tackle and the bream will very often be above the wreck rather than in it. When you come across them on rough or rocky ground by using rigs which keep the hooks clear of the bottom you can get away with remarkably light tackle.

A two- or three-hook paternoster with hooks as small as size two, or smaller, will do. The simpler the better and without any excessive bling or beads.

As for rods and reels, I use a fixed-spool reel and a long rod with the flexible tip, my favoured rod is an Artico. The reel is loaded with braid, which I find much easier to use for this type of fishing with a short leader length of mono, especially when fishing in rocky areas. 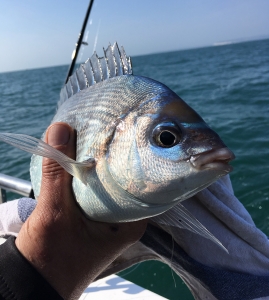 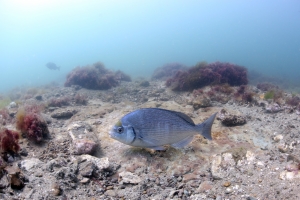 There are three favoured rigs used by anglers for bream. The Portland rig is favoured by many. This is essentially an adaptation of a freshwater bolt rig. A 400mm trace line has a hook length attached to a swivel which is allowed to move up and down the line. Below this is another swivel and a lead link. The Wishbone rig has two hooks rigged on a running boom and the classic Paternoster deploys two or three hooks above the lead. Much depends on the type of ground you are fishing on. Paternoster and Portland rigs work better when you are trotting down tide. 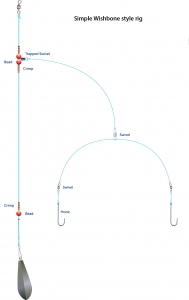 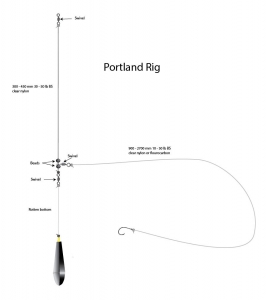 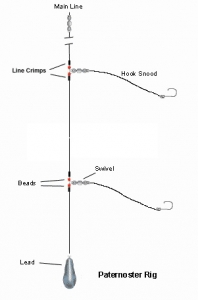 When fishing venues like the Kingmere Rocks or some of the West Country reefs, at anchor, which bream aggregate on during the breeding season, putting down ground-bait will greatly increase your chances. My favoured way is to mash up fish and bread crumbs and freeze it in the bag or small bucket. The point about freezing it is that it will release particles slowly as the block melts and allowing a gradual stream of particles to drift down the tide. This will keep fish coming to you for much longer.

Black Bream will eat almost anything. They are catholic feeders and can be taken on worms, fish or squid baits. My favourite, however, is small strips of squid, mainly because it’s quite tough and will stay on the hook for longer. Favourite bait varies from venue to venue and, as with all fish, can be greatly affected by what food they are feeding on at the time. 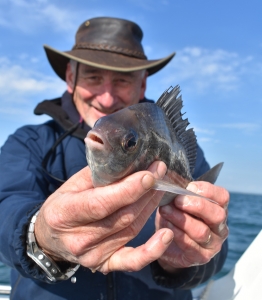 This is where it gets interesting. Sometimes bream are feeding so hard you don’t need to worry too much about getting the techniques right. I’ve lost count of the number of times I’ve been on a boat bream fishing and one or two anglers catch all the decent specimens, and regularly. There is a skill to it fishing for bream which will tend to bag you more or bigger fish.

Firstly, when at anchor and there is a reasonable tide running, just enough to hold the bottom, then I like to trot my lead down-tide and hold my rod feeling for bites. I try to feel the bottom, trotting down and gently reeling back every so often to cover the same ground and hoping the trail of ground-bait will draw the fish in to my offering.

The reason a long rod with a sensitive tip works is because bite detection and knowing when to strike can be very important. A long rod is helpful if you are fishing on the side of an anchored boat as it allows you to trot down-tide keeping away from all the other rods down-tide of your position. Catching bream isn’t just about chucking it out and sticking the rod down and waiting. It takes practice and time to get it right. 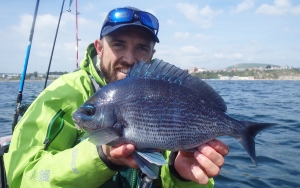 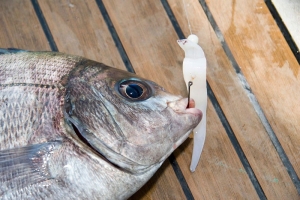 Generally, the male fish begin to re-appear in late March in readiness for the breeding season. They overwinter in deeper water in the south west approaches or around offshore wrecks. Female fish then arrive and the breeding cycle begins. Once breeding has finished the fish aggregate above the breeding marks and in September the bigger males move off to deeper wreck marks where they can be landed right through to November (although in some parts of the channel, in warmer winters, you can catch them until the end of the year.

The juvenile and smaller stock of fish will tend to stay where the food is closer inshore and can be caught around piers and off suitable shore venues. Sometimes they appear in such great numbers they can be a nuisance. I once boated over a hundred fish in a couple of hours over a mark I was fishing on!

Any reefs and rough ground will attract bream shoals, particularly where there are a lot of crustaceans living. I’ve even caught them drifting for plaice across sandy or mixed ground but, generally, I’d prefer to anchor on rough ground, a rocky outcrop or reef and bring them to me using ground-bait. Mid-channel wrecks are always good bream locations, especially in the autumn where the bigger specimens can be located. Wrecks often produce the bigger specimens particularly through September and October after the breeding season. 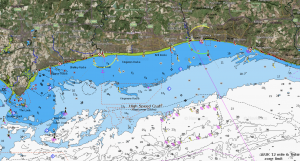 Perhaps the most iconic bream venue in the eastern channel is the Kingmere reef, an area about off  the coast of West Sussex. It’s made up of chalk and sandstone rocks covered in a fine gravel. The area was recently designated as a marine conservation zone and in order to protect the bream and the chalk substrate.The area is now a Marine Conservation Zone, primarily to protect the bream when they are breeding. It is divided into four different Zones with one prohibiting any activity between March and October. The others 3 allow angling but there are strict bag limits of 5 fish per angler as part of a voluntary code of conduct. See more here and on the Sussex IFCA website here 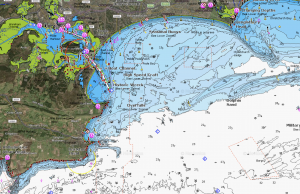 The area around Poole and Swanage is rich in bream fishing during the summer. There are numerous breeding sites in the area and one or two of these havens been designated as Marine Conservation Zones. Poole rocks is prolific for smaller bream while larger ones can be found on some of the deeper marks in Swanage Bay.

Further west, in the Lyme bay area, the bream season runs from August to November, there are lots of marks, all within five miles of Lyme Regis. The famous Tennants reefs are good areas. It is best to anchor on the edge of either of the reefs, there are many brittle star beds between three and five miles from the harbour. Hooks between size 6 and 2 on paternoster style rigs work best.

Between May and October, the wrecks in Lyme Bay, some within a few miles of coast including the Bretagne, Ursa, Glocliffe and Napoli, provide outstanding fishing with fish to 6lbs caught regularly.

The area of rough ground ten miles South East of Beer Head has rarely disappointed black bream enthusiasts. Throughout the summer and autumn anglers have caught more than a hundred, averaging 2.5 to 3lbs in six hours fishing.

An area of rough ground off the Dart Estuary in South Devon. It has a hstory of large specimens including a previous UK record fish of 6lbs 7ozs. The reef is close to the Skerries Banks that extend for several miles from the buoy to Start Point. Fishing on the drift and at anchor gives an equal chance of consistent success with fish that are often in the 4lb class.

The pinnacle off the southern side of the Eddystone and the nearby Hands Deep Reef give the occasional very large specimen but, making a sizeable bag is rare. Black bream have never been a priority species for Cornish boat anglers but Pells and Quies Reef on the north coast do produce worthwhile specimens. The Manacles and the several nearby wrecks have also given blacks in the 5lb class.

The British record, boat caught, bream is 6lb 4oz and was caught by John Garlic in Devon in 1977.

For more on black bream see our You Tube video

Apart from the Black bream there are a number of other species to be caught in British waters. 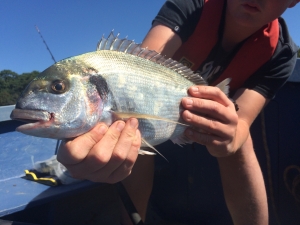 Now the most prized of the bream species. Its most distinguishing marking is the gold bar across the forehead between the eyes. Up until a few years ago this hard fighting fish could only be caught in the West Country but increasingly specimens are being landed all along the south coast and as far east as Dungeness in Kent. They specialise in feeding on crabs and will quite often travel a long way up estuaries in quite shallow water in search of food. 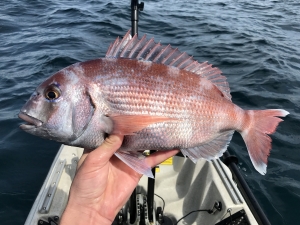 This species is still confined to the West Country and is the largest bream species it can grow a metre long and weigh around fifteen pounds although no fish that large has been recorded in British waters. It has a slightly more elongated body than most other bream species and its dorsal fin is unusual in that it begins as a spined fin and then is more rounded and softer in the trailing edge.

Also known as the known as the pomfret they are dark grey or green they are more common in the south of the UK although the both records come from the north of the UK. They generally live in offshore waters and will feed at all water levels.

Red bream is distributed around the UK, but is concentrated in the English Channel. It is a deeper water fish with larger eyes and hunts around wrecks, caves and offshore structures, which are usually in at least thirty or forty metres of water. It can grow to 10lb but is more often less than half that size.

Pandora’s  bream grows to around four pounds in size and is a rare visitor to UK waters.  It has a much slimmer and longer body than most bream species and is mostly silver in colour, often with a pinkish tinge on the black, and blue/purple speckles. It’s generally rarely caught. 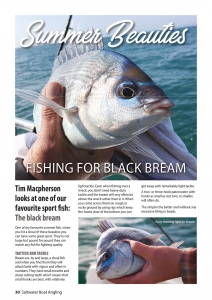 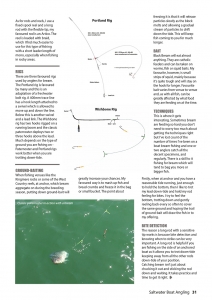 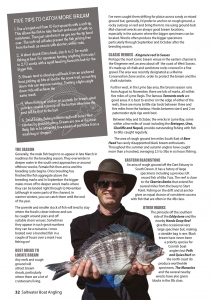 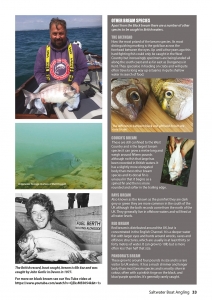