Earlier this year Dave Cheal and Ben Creaser were featured in this series discussing the tactics they employ to target big fish; in particular big bass using the lures they make themselves and market via their Wight Water Lures Facebook page.  We made plans to fish together as soon as my diary and the weather allowed, and I am pleased to say that it has at last happened. 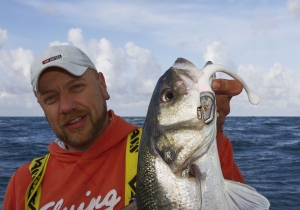 It very nearly didn’t as the night before the trip it was still blowing a steady force six southerly.  Fortunately, at some point during the night, things abated and when I met Dave and Ben at Yaverland boat park, at the east end of the Isle of Wight and where Dave keeps his Warrior 165, Fish Ardour, there was barely a breath of wind.  The sea looked calm too, but it was deceptive and there was enough residual swell running to make the beach launch interesting rather than routine.

A rogue sunfish proved a distraction

With the boat safely launched we set out across the bay to reach the first mark in time for the tide.  Our mission to get there on time was hampered slightly when we spotted a sunfish and took a detour to try and eyeball it at close range.  Unfortunately, it was wily and stayed one step ahead of us, but any sunfish sighting is always welcome. 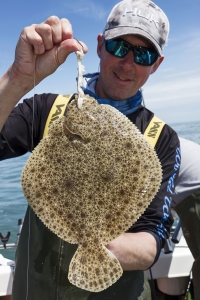 On arrival at the mark Dave and Ben set about rigging up their rods in the form of Hart and Savage Gear spinning rods between six and seven feet long combined with Penn fixed spool reels loaded with braid and clear leaders. Dave selected a 130g jig head combined with a 180mm Super Launce having a dark back. Ben selected the same set-up but with an all-white lure. No other form of weight is used, and the jig head is attached directly to the end of the leader via a clip.

Dave’s success was almost instantaneous. On the very first drift his rod heeled over violently and braid spilled off his reel as what was obviously a good fish latched onto his lure. Being no stranger to this situation things played out well and the first fish of the day was soon sliding over the rim of the net; a beautifully conditioned fish of around 8lb.  It wasn’t long before Ben’s rod was arched over too. His fish had even more spirit and took plenty of line.  This direct form of fishing with light rods really enables the true fighting potential of the fish to be realised.  With more of a tussle on his hands, it took a bit longer for us to get sight of Ben’s fish, but it was duly done and the second bass of the day was eventually on the deck. 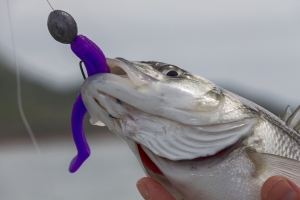 This one looked in even better condition than Dave’s and had the classic black back, broad flanks and fat belly of a big bass. Despite looking obviously bigger than Dave’s it tipped the scales only half a pound or so heavier.  Bass have an annoying habit of looking larger than they are.  Part of the reason for its fat belly was soon evident when it coughed up and almost pristine whiting that had not long been eaten.  That the bass were predating on bait fish was no surprise, but the fact that whiting were still around in June was.

Their aim is to use the minimum weight of jig head that keeps them in touch with the seabed, which is often snaggy on the marks they fish. Once contact with the seabed is made, the lure is raised vertically with a very exaggerated upward sweep of the rod, often ending with the rod at full reach above the anglers’ head.  The lure is then allowed to flutter back down towards the seabed.   This is the time when the lure is working, and bass rarely hit the lure when it is travelling upwards. Using the minimum weight of jig head maximises the time the lure is working by slowing the descent. The Wight Water lures obviously have sufficient action in their supple tails to work at these low speeds.

The fishing continued well on our first mark with both anglers taking quality fish, though none as big as the first two. With the fishing so good Dave was sporting a headband mounted Go Pro 7 to capture video footage for his blog.  As bites started to diminish Ben switched to a traditional flying collar rig with one of their Dandy Shad lures rigged weedless-style using a shaped hook.  Dave persevered with the vertical jigging and both methods paid dividends as we had our first double hook-up of the day.

Eventually it was time to move, this time to a mark that fishes well for bass and pollack.  Dave particularly wanted to catch a small pollack as he considers them good eating. Ironically, he continued to find nice sized bass and it was down to Ben to find what turned out to be an elusive pollack for Dave.  Wanting to get as many pictures as possible on the day, I had purposely left my rods behind, vowing not to fish.  By this time though my resolve was weakening and when Dave offered me a rod I couldn’t resist and was rewarded with a nice bass on a yellow and red Dandy Shad.

Lures pitched into a melee

Looking around we spotted a very large flock of gulls wheeling and diving. Moving towards the mayhem, Ben and Dave pitched lures into the melee that was obviously taking place beneath the surface.  To give the lure some weight, an egg lead was slid onto the leader in a similar manner to a Texas Rig.  Plenty of bass came aboard ranging from school bass to fish around 3lb. We did a few drifts through the gulls before we deemed ourselves “assed-out” and decided on a final move to anchor up and try for a turbot.  On route to the final destination, we found Mike Mowbray, another well-known angler with many specimen fish to his name, already anchored up at a nearby spot. He’d had a solid day and had caught some good rays but, more importantly, had taken a bass that tipped the scales at 12 1/2lb.

We continued on to our spot and anchored up for some relaxing fishing to close things out.  No specimen turbot were caught but Dave did manage three small ones, or maybe the same fish three times – they did look that similar.  Turbot, no matter what size, are always good to see, being possibly one of the most beautifully marked fish in our seas. So there the day ended on a final positive note.