I’ve been using SonarChartTMLive on all my marine electronics. It’s proved to be the best and most detailed chart software I’ve used repeatedly giving us an edge in finding new fishing areas as well as improving our ability to drift or anchor correctly on marks – both new ones in unfamiliar waters and existing marks we’ve been using for years.

A couple of recent examples illustrate this. I have a mark we’ve been fishing on for years, and catching fish regularly, without really understanding much about the bottom topography. According to our existing maps the bottom was flat. Using SonarChartTM, with its enhanced mapping of the sea bed, we could see exactly why the mark was working so effectively.

There were a series of shallow depressions – all in a drifting line which produced really good sized fish every time we came over one. We’d got the depressions marked but without really understanding why they produced fish. Flatfish do like to sit in wee depressions on the bottom, it gives them a degree of cover even in a reasonably flat substrate. SonarChartTMhas also helped immensely when we’ve towed our boat to other venues we are less familiar. We were in Ireland last year taking part in a big boat festival. Using the SonarChartTM we were able to keep up with the other competitors more familiar with the these, to us, virgin waters.

Now Navionics have produced an addition to their Platinum version of the sonar charts which makes this an even better tool for anglers.

SonarChartTMShading is an extra feature added into the their Platinum charts version. The Platinum version also contains the satellite overlay layer which gives an optimized top-down view of coastal areas and and gives an enhanced view of the coastline to improve situation awareness. This can be used in conjunction with SonarChartTMShading which gives enhanced view the contours of the bottom. Using the menu tools available you can adjust the transparency of the shading, overlaid on the satellite mapping, so it’s possible to see specific features shaded and the annotation from the satellite mapping.

SonarChartTMShading is created from the high-definition contour data within SonarChartTM. It presents a detailed rendering of the seafloor and lake bottoms in varying shades of blue. The deeper the water the darker the blue so you can see channels and drop offs far more clearly giving a much better view of the way the sea bed is shaped. 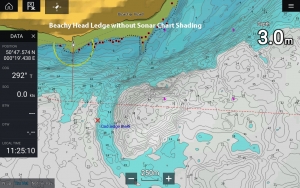 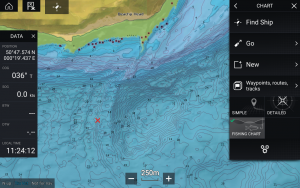 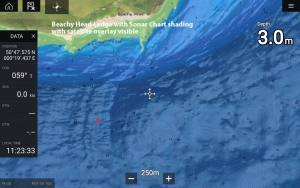 We recently tested this new feature using our Raymarine Axiom. We have recently found a brand-new mark, one no one has been fishing on before, which is extremely unusual in our busy waters off Eastbourne. It is a mark which is half-way between one place and another in what is regarded as a kind of kind of no-man’s land. Using SonarChartTM Shading we’ve been able to identify very clearly exactly which part of this mark will fish best. It is a small reef, 500m long and 250 metres wide. There is a pinnacle 500 metres to the south with a gully running between the two. By choosing our anchoring spot carefully, using SCS, we hit a bonanza of bream and gurnard, with small cod thrown in. Prior to using SCS we had drifted around it and anchored near it but without being able to connect with a decent head of fish.

As with all these electronics tools it is only as good as the user and his/her ability to interpret them, and we are continuously learning how to get the best out of them but one thing Navionics seem very good at is making things easy to use and interpret.

Areas the Sonar Chart Shading covers is being gradually released so do check your area is covered before installing. Because Shading is so data hungry the product is user selectable, based on the region the angler is based in. It would need more storage than a normal card can cope with if the whole of the UK was included. However, users can use the online chart installer to change the data installed on the card so that if you move areas you can re-load data for the new fishing spots. 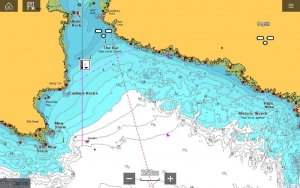 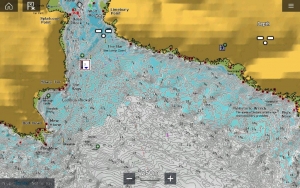 SonarChart with 50% opacity and no opacity 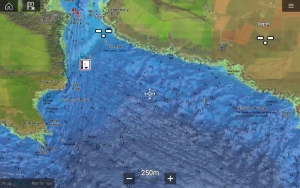 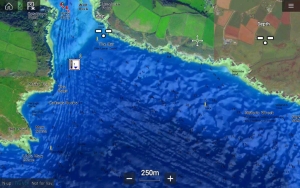 Working alongside SCS is the satellite overlay tool which gives anoptimized top-down view of inland and coastal areas. This can be used in conjunction with SonarChartTMShading. Using the menu tools available you can adjust the levels of transparency of the shading and integrate it with the hi-re contours, overlaid on the satellite mapping so it’s possible to see specific features shaded and the annotation from the satellite mapping.

The screen shots show the difference between the normal satellite overlay chart and the shading. For the Beachy Head ledge, a popular bass and cod mark it can enhance the understanding of how the contours are lined up and gives different perspective, almost in 3D.

Please note at the moment the shading is only available on inshore areas but more will be added as updates becomes available.