It’s always great when anglers get together to raise money for a good cause by doing what they love best – catching fish. And so, when we were approached by Tony Smith, an angler from Basingstoke, with a great story about how he and group of friends had done just that, we were very keen to give them coverage. We were hoping to send one of our many correspondents to fish it but time and tides got in the way, as they often do.

Nonetheless, we stayed in touch and even the weather was kind enough to allow them to get out and stage their event – a two day sharking for charity event from Hayling Island in Hampshire. The charity in question was St Michaels Hospice and they were aiming to raise at least £1000.

Tony owns a Warrior 165, Dream On, with his nephew Craig and between them they managed to get four local boats; Dream on, Angry Fish, Daisy and Lady Hamilton, and eight anglers – all experienced skippers – to join the fun. They set off early from the Hardway Sailing Club in Portsmouth with the sun rising over the Spinnaker Tower in near perfect weather.

After a few photo’s they headed out to Dunnose on the Isle of Wight, stopping only to catch mackerel on the way. With a favourable tide they set up a drift from Dunnose to St Catherines Deep with a long rubby-dubby slick set out. 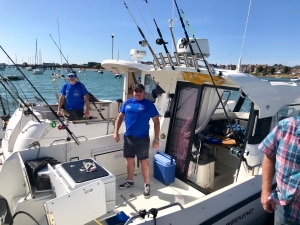 The Isle of Wight is known for its thresher shark fishing, but blues, and sometimes porbeagles, turn up in the summer too. And, of course, there is always the large populations of tope which come to the Island – and further east as well.   As often happens with shark fishing, there was a long wait as the sharks didn’t really come out to play. The crews spent all day staring at their set balloons drifting and bobbing about in the slick.

By 7pm it was clear the sharks weren’t biting so they berthed at Bembridge and planned a tope fishing trip for the following day and sleeping on their boats overnight. Next morning the weather stayed with them and they all steamed to their ‘secret’ tope mark.

This time things went a bit more to plan and the first tope, an 8lb fish, came aboard the Lady Hamilton. Dream On then had a screamer of a run which, sadly, smashed them up but which was quickly followed with a fish of about 12lb. There followed an epic battle on Lady Hamilton, with what turned out to be a lovely fish of, what was estimated at about, 40lb. 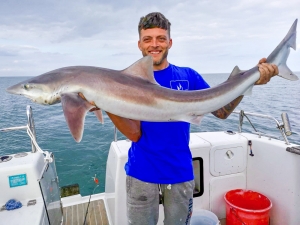 Although the fishing was very difficult they all had a great weekend and raised a staggering £1000 including a generous donation from Tony’s firm, Champion Build, in Basingstoke.

St Michael’s Hospice donated T-shirts on which they had the names of the boats printed (by Vision Signs, www.visionsignsuk.co.uk).

It’s hard to get people interested in charity events but anglers are always generous when asked to put their hands in their pockets and it’s great such a worthy caused as St Michaels were able to benefit – and, of course, the guys had a great time raising the money in the process.

They plan to do the same next year so if you fancy getting involved email Tony at Tony.Smith@thechampiongroup.co.uk