Mark Radcliffe tells how he backed a cracker in Panama. Pictures by Will Richardson of JK Media 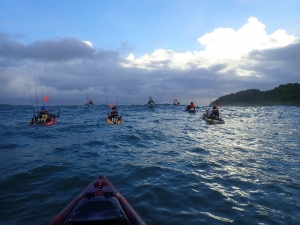 Having spent the last eight months planning a kayak fishing trip to Panama with friends, it came as a complete surprise when I was fortunate enough to be invited on a Jackson Kayak Media shoot to Los Buzos, Panama last month.  This resort is known for its big cubera snapper, and head guide Adam Fisk’s solo capture of a 400lb+ marlin from the kayak last year, but what we were there to target were the mighty rooster fish that cruise along its inshore reefs. It was a Friday morning which saw me in Panama city, meeting up with the rest of the team. Will had travelled down from Canada, whilst Eric, Russell, Chris and Jameson were from the USA. A couple of them had some saltwater experience but for Chris Funk and Russell Johnson this was to be their first time on the open ocean, and was certain to see them attached to their biggest fish yet from a kayak. The seven-hour drive from Panama City to Los Buzos was spent getting acquainted and by the time we arrived the level of excitement and anticipation was at fever pitch.

Los Buzos Lodge has been around for three years is fully equipped with everything you could need. They have a large fleet of Jackson and Hobie kayaks, a full selection of rods and reels available for hire as well as having a small tackle shop full of the most productive lures. There are a variety of accommodation options for various sized groups, ranging from individual rooms with en-suite facilities to bunk rooms for larger groups. The resort is full board, with a wide variety of meals provided, as well as fresh snacks of sashimi and ceviche when you come off the water every day. An added attraction are the fridges full of complimentary beer which is very welcome after a long day at sea 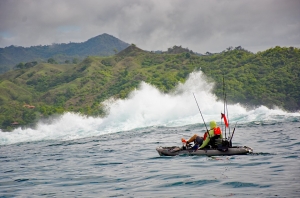 Saturday morning saw us all on the beach at 6am and ready to launch. After so much travel and so much build up it was great to be finally fishing. The beach at Los Buzos is flanked by two inshore reefs which offer some protection from the huge Pacific swells that roll in. However, there is still often a much bigger surf that I am used to in the UK. Adam and Kevin are masters at dealing with this and with some precision timing they soon had us all safely afloat. The only thing that now lay between us and the open ocean was the Los Buzos S Curve. This is a narrow passage between the two reefs and on first appearance it can be daunting. The kayaks have to follow the guides through in single file whilst breakers are crashing over reefs only ten meters away to both the left and the right of you. If you stay in the passage you have relatively calm water to traverse to the fishing grounds.

There are three methods that are the mainstay of fishing in Panama. The first are hard plastics, be they deep or shallow divers or large poppers on the surface. The second is jigging. Smaller jigs of around 20g can be used for catching bait fish whilst larger jigs up to 200g can be needed to get down to the deeper marks in the tide looking for snapper and grouper. The third and for us the most productive method of fishing was live baiting. The live bait can be anything from a 12oz blue runner to a 5lb bonito. It didn’t seem to matter what you put down, there was always a bigger fish willing to eat it. On reaching the ocean we all threw out shallow divers as we paddled to the marks and soon enough a steady stream of sierra mackerel and snapper species were coming aboard. Once out around the reefs moonfish and bonito were providing ready live baits whilst small sharks, jack crevalle and more colourful snapper species kept the rods constantly hooped over. However, there was no sign of the rooster fish that we had come for. I had lost a couple of big fish on live-baits but the general consensus was that these were cubera snapper which are renown for their hit and run tactics taking you deep into the reef. It was looking like the stormy weather that had hit the area the previous week had coloured up some of the inshore water which was affecting the fishing. For three days we had plenty of fish up to around twenty pounds and whilst this would be classed as great fishing back home it wasn’t what we had travelled all this way for.

What a difference a day makes 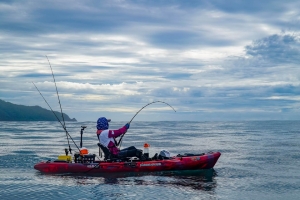 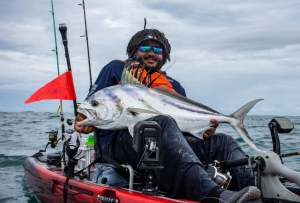 Day four and everything felt different. The swells had dropped away and the view from the beach looked stunning. As we were setting up to launch Kevin said that he could ‘smell the rooster fish today’ and how right he was. Immediately we came through the s curve I hooked a 4lb bonito that went straight down as live bait. It wasn’t long before the clicker was screaming and after a 45-minute battle I had a seven-foot black tipped shark by the yak. At around 200lb it wasn’t the intended target but is by far my biggest fish from the kayak to date so was a very welcome capture. Soon after, a call came over the radio that Adam had found a large ball of baitfish and they were mostly blue runner. This small fish is locally known as rooster candy, so the hope was that if the bait was there the rooster fish would be too. It didn’t take long to find out. Will was the first to start shouting as his clutch started screaming, then Russell hooked up and shortly later it was myself. Its hard to describe the atmosphere as man after man started shouting and yelping all hooked up to the fish of a lifetime.

Wills fish was soon being photographed, a beautiful 46inch rooster. Russell’s went 49 inches which is around 50lb and beat his previous biggest fish by a clear 40lb. Mine was considerably smaller but the joy I felt at its capture was priceless. These truly are one of the most stunning fish in the sea. Once it was photographed and released, I paddled back over to the live-bait shoal to try and do it all over again.  We had a three-hour spell that morning where the rooster fish were all around the live bait shoal and between us, we had 11 roosters as well as cubera, yellow fin tuna and various snapper. It was certainly a day to remember and as we were met back on the beach with a crate of cold beer the smiles on everyone’s faces went from ear to ear. 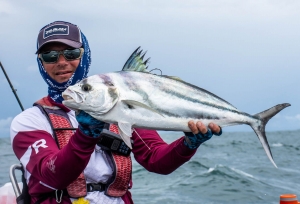 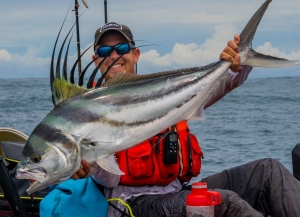 The question in everybody’s head was would the fish still be there. As we paddled out the answer soon became obvious. The bait shoal was in the same place as the previous day so hopefully the roosters would still be feeding. Todays target was to make sure those that hadn’t caught a rooster the previous day managed to get one, so the first live baits went to Chris and Eric who started trolling them towards the reef. I then dropped down a live blue runner and soon enough had another small rooster on the yak. Whilst I was happy to be catching fish, my three rooster fish had all been around ten or twenty pounds, probably the smallest of the groups captures. I really wanted a big one.

I caught another blue runner and slipped it on to the 14/0 circle hook. Almost immediately I dropped it down the clutch started to click. Counting to ten I engaged the reel and felt the rod arch over nicely as the fish started to peel off line. Then the completely unexpected happened, a huge rooster fish leapt ten feet into the air right between four kayaks. Everyone screamed and Kevin immediately started yelling that this was a 50-inch fish. My heart was racing as the fish just kept running and diving. Every time I gained line, it just took it back a few minutes later. Slowly but surely though I was gaining on it and eventually I could see it below the yak, it was way bigger than my previous ones. Safely aboard the measure was brought out and it went 50 and a half inches, the biggest one of the week and over 50lbs in weight. I was ecstatic and spent the rest of the day just paddling around with a huge grin on my face, enjoying the whole experience and not really caring about the fishing anymore.

By the end of the day everyone in the group had caught their rooster fish, in fact we had caught over twenty of them in the last two days with most of them being trophy size. Those two days on the water had been some of the most remarkable that I have experienced not only in the fishing, but the whole atmosphere, the sense of friendship, solidarity and shared experience. We all knew that what we were experiencing was a little bit special and may never be repeated.

The journey back to the UK gave me plenty of time to reflect on this trip. Initially the idea of goby hunting in Plymouth Sound doesn’t seem so appealing once you have tangled with these Pacific monsters, but I know I’ll soon be back in the swing of it. However, I also know that I will most certainly be back out to Panama as the kayak fishing there is completely addictive. If anyone is even considering a trip out there, then stop thinking about it and get yourself booked in because you will definitely have the trip of a lifetime.