Mean, moody and magnificent perfectly sums up the persona of the conger eel with a record history more complete than any other UK species. 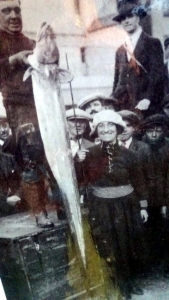 In the 1920’s and 30’s big conger from wrecks and reefs in the English Channel were making headlines and in 1922 a fish of 63 lbs 3 ozs caught off Hastings was acknowledged as a British Record by a number of publications and accepted as such by the august British Sea Anglers Society. Its captor was Miss Bluebell Klean, a concert pianist by profession and a talented saltwater angler, who in 1924 was the winner of the prestige Hastings Angling Festival beating off an entry of 300 in the process. Such was the Dreadnought Sea Angling Club member’s successes the Hastings & St. Leonards Observer printed an in-depth interview about her angling achievements. Miss Bluebell’s club was one of the first to be formed in Britain and was an organisation of remarkable stature.

The record remained in her hands until 1933 when it passed to H.A.Kelly who took his 84 lb eel fishing from Alert a boat he was familiar with at the wreck of a Japanese freighter The Toku Fuko Maru sunk after a collision in fog five miles South of Dungeness Point seven years previously. During the same trip he had others of 75 lbs, 66 lbs, 60 lbs and 55 lbs and eight more weighed between 15 and 35 lbs. In 1937 he wrote a comprehensive article on ‘Congers’ for a quarterly issue of the British Sea Anglers Society Magazine, in which he said “In the Dreadnought Society to which I belong the quest for conger is continuous and a ‘big one’ is the chief ambition of a season’s fishing.”  A copy of it is in my archive. 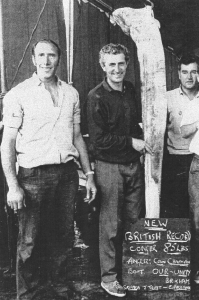 Kelly’s Record was actually beaten on a stormy day in 1936 at the Eddystone Reef from the Looe boat Heather Glen owned and skippered by the late Chid Hoskin. The captor was Yanny Jordanopulo, a Greek who was manager of the London branch of the Bank of Athens, who for over a quarter of a century spent six weeks every year at Looe seeking big fish, the Eddystone being his favourite mark.  That memorable day saw Heather Glen anchored over the Reef to the West of the Lighthouse. A mackerel that was several days old was sent to the bottom and was there for just a short time before it was taken, but the severe rise and fall of the boat in the big swell made for some uncertainty.  Line was gained and at the strike the Hardy Split-cane rod went into full compression and Jordanopulo thought the strain may be too great but it held. During its journey to the surface the monster made a number of powerful dives and line had to be palmed from the big centre-pin.  An hour or so later, the fish was weighed on the Looe Quay in front of several witnesses and a weight of 89 lbs was recorded as accurate. The eel had as much provenance as those of Klean and Kelly for record status but presumably lack of knowledge as to its significance resulted in a mystifying lack of publicity and it was not claimed as a record.

The British Record Rod Caught Fish Committee came into being in 1957 and its first task was to scrutinize old records, the result being some with no real provenance beyond hearsay and publication reports, being removed from the inherited lists, but ten eels survived the test. Brixham’s Our Unity era began in 1966 and would last for ten May to October seasons. 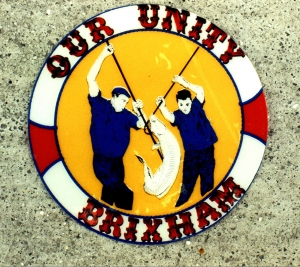 The boat was owned and jointly skippered by John Trust and Ernie Passmore but in late September of the previous year fellow Brixham skipper Dudley Stone who was then coxswain of the Brixham Lifeboat had realised the fishing potential of the multitude of wrecks in Lyme Bay and had begun charter angling with his boat Ko I Nor.  In that first season he landed eleven and three quarter tons of conger in which there were many over 50 lbs.  It was the trigger for Our Unity’s involvement and the boat was destined to become the most talked about ever in British offshore angling.

So great was the demand for places notably for the smaller tide periods the most suitable for conger activity, they found it necessary to open a phone line from 8.00 a.m. on January 1st and bookings were made on a first come basis. It became the norm for all the good tides to be fully booked within two hours of the line opening. Week long charters were preferred many coming from just a half dozen anglers prepared to share the higher cost.  There were two occasions when the whole boat was booked by just two who clearly had the funds to have it all their own way. During the ten seasons Our Unity operated the boat carried eighty tons of gutted eels to the Brixham Commercial Market. This took no account of the fish taken away by anglers under the two-fish only rule. Our Unity’s best aggregate in three and a half hours of actual fishing was 2864 lbs achieved in 1968. Trust and Passmore were the winners of the Conger Club’s top boat award from 1966 to 1974 and in that last year during the club’s Annual Presentation Weekend that attracted an attendance of 300 plus, the duo and Dudley Stone were made Honorary Members the first to be so accorded by the BCC. 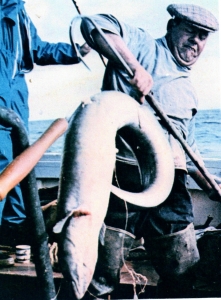 Wednesday June 10th 1970 was a significant day in the history of Our Unity.  The boat had been booked by European Federation of Sea Anglers’ stalwarts Archie Shilling, Harry Trodd, Bernard Howard and Colin Chapman. Joe Davis the former world snooker champion should have been the fifth member of the party but he fell ill and so remained at the hotel in Brixham. The tide was perfect and allowed five hours over a hulk lying sixteen miles from Berry Head in forty-three fathoms of water. A short spell of feathering during the journey out produced a hundred or so mackerel, a species then common. With the boat perfectly aligned to the wreck the baits on 10/0 hooks were initially savaged by ling and it was not until the second hour that conger got a look in.

The first eels to come up were mere 40 pounders, then Shilling began fighting what was clearly a much bigger fish. Chapman was also engaged and still pumping when Shilling’s eel surfaced and was hauled over the gunwale. It was later weighed in at 79 lbs 4 ozs. Forty minutes went by while Chapman got his eel to the surface. There was a strong belief it would contest Kelly’s record and hour’s later on the commercial scale at the Brixham Market it was confirmed when the scale needle went to 85 lbs. It was only a 1lb advantage over the 1933 fish but a new record sure enough. The next day the length of the trip was curtailed by thick fog but in the three hours that were fished Chapman took eels of 67 lbs and 62 lbs and both Trodd and Howard fish in 60 lb class.  Kelly’s record had lasted thirty-seven years. Chapman’s incumbency would be a mere sixteen days.

Army Corporal Peter Arscott was on the final day of his honeymoon in Torquay when he went afloat aboard Eric Endacott’s Girl Alison, the trip being booked the day before at Ted Tuckerman’s quayside tackle shop. It was roughly three hours into the session when Arscott had his relatively short encounter with a fish that tested the solid glass Milbro Commander rod carrying a large centre-pin loaded with 72 b/s monofilament to a 100 lb wire trace.  The eel did not give much trouble and made no more than four dives for the bottom and when it was at the gunwale the boat’s crewman John ‘Gentle-giant’ Parnell had it safely over in a single sweep. Weighing 92 lbs 13 ozs it was a new record with pounds to spare.

The Invaders from Wales

It took three seasons of hectic conger action before Our Unity got the record back. A group of dedicated Welsh conger hunters who called themselves The Invaders had booked the boat for two weeks. It was during the eleventh day of the charter in perfect tide and weather that Billy Furnish had an eel of 82 lbs 13 ozs an hour or so Bill Oaten who was offering fillets of red bream to a fish that gave a great fight and was definitely a contender for Arscott’s record. Rather than make an immediate return to Brixham and the scales The Invaders opted to fish on in the hope to capture an even bigger eel, a decision that had most certainly an effect on the final weigh of Oaten’s fish. On the Brixham scales eight hours after capture it was recorded at 95 lbs 11 ozs. But for the delay between capture and scales, it may well have been the first 100 pounder.