For a long time, I‘ve held the opinion that, for the types of fishing I do, two-speed reels are a nice to have but not an essential.  Last year that changed.  The reason for this was that the “cod grounds” around the Isle of Wight, while being on the whole bereft of cod, were literally carpeted with conger.  By the end of my second trip spent winching in what seemed like an endless “Conga of conger”, I realised the years are catching up with me and I needed some help.

A two-speed reel seemed a good starting place to look for this help. I should have bought one there and then but I persevered for the whole of the season; I have no idea why. Later, with time on my hands in lockdown, I bit the bullet and got myself a Penn Fathom 25 two-speed (from Veals Mail Order).  Having a narrow spool with a capacity of 330 yards of 20lb mono, I knew this would balance well with a rod in the 30-50lb category and should form a good conger dragging outfit.  As well as the capacity, the other thing that sounded good from the reel’s spec’ was the reel’s two gear ratios. Top gear is 5.5:1 which, with a full spool, claws 38” of line back on the reel.  Perfect for reeling in just to change bait or with some small bait-robber of a fish on the hook.  Low gear however is 2:7:1. This “crawl along” ratio halves that retrieve rate to around 19” per turn of the handle.

This is some serious winching power; not just perfect for angry conger but also a double-shot of dogfish with a pound and a half of lead in the middle of spring tide.  It will probably also be good for a thirty-pound cod but let’s be realistic.  Winching power like that needs backup otherwise the potential will never be realised. The Penn fathom has all of this.  It features a full metal frame and spool, a long-throw handle with comfortable grip and finally, a powerful, smooth drag.  The Lever Drag on this Penn Fathom features Dura Drag carbon washers to give a maximum quoted figure of 33lb of pressure at the full setting.

It’s not that unusual in this day and age to see figures like that quoted but the Fathom has a secret weapon to make those heady figures more usable. Buried in the spool is a thrust bearing. Most, though not all lever-drag reels, feature a bearing arrangement based around standard ball bearings. As the drag pressure is increased on this type of arrangement, the side load imparted on the bearings makes the handle progressively stiffer to turn and also leads to accelerated bearing wear. The thrust bearing set-up goes a long way to alleviate this.

Normally, I would have stripped a reel like this to show you what I am referring to but in this case I am not going to there being another another reason I was drawn to the Penn Fathom.  That is because it has a reputation for leaving the factory in a fully-serviced condition. So many reels leave their place of manufacture almost dry and start to corrode internally from the first day they are used. The Penn Fathom is different and is reputed to be well greased to both protect it and keep it functioning. We shall see. Watch this space in a year or so and I’ll let you know how things have gone. It has a bearing count of five, which is quite modest, but I am sure is pretty complicated inside so I hope lives up to its reputation. So far, I am more than pleased with it and things look promising though heavy usage has been savagely curtailed by recent events.

The Penn Senator: a Golden oldie 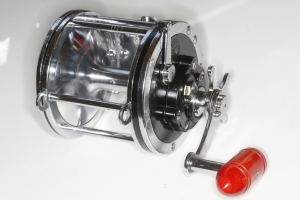 Funnily enough, the purchase of this reel coincided with the arrival of a true golden oldie on my workbench. A friend of mine had purchased a Penn Senator 6/0 for occasional shark fishing but he wanted it serviced before taking it afloat. Back in the day, when I first fished off the Needles as a teenager, this reel was the height of luxury. Most anglers had a Garcia Mitchell 624 but they envied the guys who had a Penn Senator 4/0.  Most of them however, aspired to a 6/0. Of course, these were the days when heavy mono or Dacron were the go-to choice for main line. (Some of course favoured wire main line, and would have bought a Penn Master Mariner but I digress down memory lane).

Back to the Penn 6/0 that graced my workbench, the first thing that struck me was the weight; it felt like I was picking up a bag of leads. I put it on some scales and it tipped the balance at 3.9lb – and that was without any line. 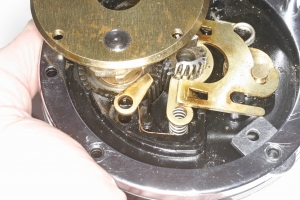 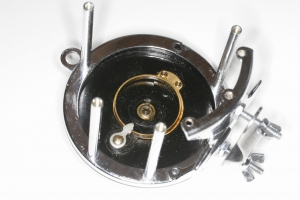 Pictures: The internal workings of the Penn Senator

Doing the same with the Fathom 25 it tipped the scales at just under 1.4lb fully loaded with 300 yards of braid and mono backing. I think the Senator’s chromed-brass spool probably weighed more than that. How things have changed. Interestingly, we are actually comparing like with like. The Senator has a capacity of 450 yards of 50lb mono whereas the Fathom 25 has a quoted capacity of 475 yards of 50lb braid. With that said, the senator will take 700 yards of 30lb mono making it an ideal capacity for 30lb sharking with nylon line. Taking the senator apart I was struck by how small the gears were. What I had failed to notice was that this was an original Senator 114, with 2.1:1 gears, not the high speed 114H.  Even with its massive spool full, it still only puts 21 inches of line on the reel per turn of the handle. I can’t remember the ratio for the high-speed model but it would still be low by today’s standards.  Of course, being a star drag reel, the limiting factor for the drag washer is the main gear diameter and as they are tiny, so are the drag washers. This is reflected in the maximum drag available of 21lb; something like only two thirds of the Fathom. You can modify the reel to raise this figure but that is not the point of this feature.  The drag washer size limiting factor for the lever drag Fathom is spool diameter and having a narrow but tall aspect ratio allows a chunky drag washer to be fitted.

All comparisons aside, this Senator was in good condition.  A couple of the reinforcing bands on the side plates had broken but this is a common problem. Ignoring that the reel apart it showed very little signs of use and is a good example of a classic reel. I really hope it gets to haul a shark in before it is retired and gets the chance to become what it was meant to be at least one more time. I have only scratched the surface of the heritage of the Penn Senator. If you Google IGFA and Penn Senator you’ll see what I mean.  That said, I know which one will get the job of  bullying up congers that have mullered my cod baits more efficiently; it’s the fathom and that’s the one I will be using.  Truth to tell I probably couldn’t lift the Senator all day.