As a follow on to my Specimen Hunting series, which came to a close in the spring and our fishing has been somewhat curtailed in recent weeks, we thought it would be a good idea if I listed for you the five best fish that I have caught.  Initially I thought this would be a relatively easy task but even with all the time on my hands provided by the Coronavirus lockdown, I still had to rack my brains to get the list down to five.

Don’t get me wrong, I am not saying this is because I have caught so many specimen fish.  Far from it.  It is because for me it is not always about how heavy the fish is, or its percentage of a record, but how memorable the whole event was.  Many [many!] years ago, when I used to only go beach fishing, I read an article by John Holden where he talked about the late Ian Gillespie who was a true angling pioneer. He described how Ian “Painted his fishing on a wide canvas and enjoyed everything he caught”.  I have tried to approach my angling in the same way ever since and those words have stuck with me, so much so that here I am some four decades later relaying them to you. With this in mind here are what I consider to be my best five boat-caught fish.  They are not in any particular order, though I do have favourite. 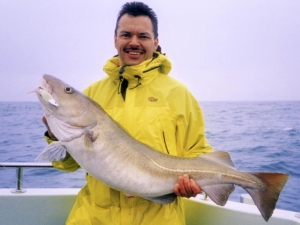 Firstly, it’s cod.  I guess there would be very few among us who wouldn’t list their best cod in their top five.  Again though, it is how memorable this fish was that cements its place in the running order.  My best cod was a nicely conditioned wreck-caught cod taken on the 26th April 2003 and tipped the scales at 26 1/2lb.  We were drift fishing aboard Roger Bayzand’s Sundance and I was using an Ambassadeur Elite 30lb class rod and an Abu 7000 reel so the fish was far from out-gunned and had a chance to give a good account of itself.  In fact, I thought I’d snagged the wreck to begin with.  What made it memorable was that I was only a couple of seasons into my angling photo-journalism career and my library of stock pictures was slim.  The fish took a luminous Fishtek shad, with that choice of lure being dictated by the fact I was working on a feature that aimed to assess the merits of glow-in-the-dark lures and attractors. A fish like this turning up was just what I needed; the fact it was caught by me was the icing on the cake. The early 2000’s was when everything was switching over to digital in a big way throughout the publishing world and the only picture I have is a poor quality scan.  Somewhere there must be an original 35mm slide but right now I can’t lay my hands on it. 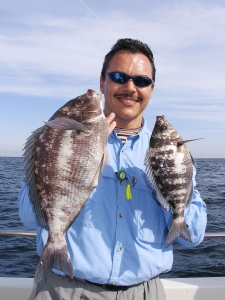 Next up, it’s my favourite UK fish – bream. How could I leave out my best fish of that species? I am extremely lucky in that I have caught two that have taken the scales round to 5lb, and both fish came as double-shots with another, smaller fish. The picture shows the second pair which was on a trip to a mid-channel wreck in September 2005 with specimen bream as the target.  It’s always good when a plan comes together but what makes this catch even more memorable was how much chance the fish had to escape. When the fish was initially hooked, I was almost immediately taken into a snag that felt like a piece of rope. There was no way I could free the fish and frustratingly the skipper had to pull for a break even though the fish was clearly still hooked.  The skipper freed the trace and told me to wind quickly as he could still feel the fish. This I duly did and was almost immediately snagged again, meaning we had to repeat the procedure. No one was more surprised than me when after pulling for a break twice, what was obviously a good fish was still attached – especially given how good bream usually are at un-attaching themselves. With the two fish safely aboard, the long flowing two hook trace I was using was tangled into a tight ball and the fish were about six inches apart. I guess it was the lead that was snagged and throughout the proceedings, the two fish had been swimming all over the place doing their knitting.  How neither came off I will never know. 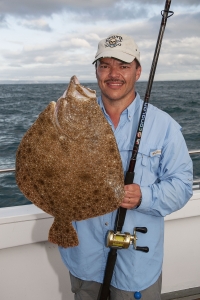 My next fish is from a genre that have always been my angling nemesis – flatfish.  Even back in my beach fishing days, when flounders were plentiful in the tidal rivers and estuaries of the Isle of Wight, I spent many hours watching other anglers catch them. Ironically it would be the days when there seemed fewer fish to be had that I would catch them.  Switching to boat fishing it seems to be the same story whether targeting sole, plaice or turbot.  It’s not that I never catch them, I just seem to make hard work of it. The biggest flatfish I have caught have been turbot in Alderney.  I have never had a really big one but have had a few that have gone 10-11lb.  The one pictured was taken in 2006 aboard Gregg Woodford’s Southern Star.  True to my form book, it was a trip when flatfish were hard to find.  A few brill were caught but the only two turbot were caught by me; the ten pounder shown and another five pounder. My old angling buddy Dale Edmunds was with me.  He has been on every trip to Alderney with me and is a grandmaster at flatfish. This is the only time I have both out-fished him and also seen him score a turbot blank on a Channel Island jaunt.  I think I probably reached the pinnacle of my flatfish career on that trip. 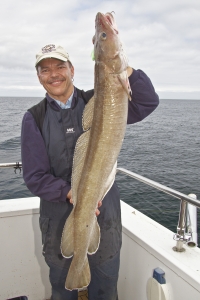 I put ling in my top five quite simply because it is a fish I never thought I would ever get a chance to catch.  As a teenager I would look at pictures in the angling press of big ling caught from wrecks off of the West Country.  They all seemed to be 30lb plus in those days but by the time I started boat fishing regularly, they were something that was talked about from the old days, with just a few turning up each year. Luckily, some of the more distant wrecks on the French side of the English Channel still, sometimes, hold a population of ling and this gave me the chance to catch the one in the picture, which took the scales to nearly 20lb. Not a fish like those of my youth, but I am not complaining 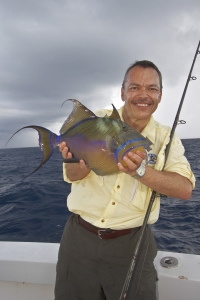 The last fish in my top five is my favourite and is a fish I caught on holiday in Mexico in 2013.  It is probably the most spectacular looking fish I have hooked and is the Queen triggerfish; a species I didn’t know existed until the day I caught it.  It was a really chunky fish that weighed about 7lb and fought like a demon on my Abu Conolon uptide travel rod; the same rod that is in the picture of the turbot. What made the catch really special though was the reel; it was my late father’s red Abu 7000, bought from our local tackle shop in 1979.  On the day he bought it I very much doubt he ever dreamt that reel would end up over three decades later being used in Mexico.  Nevertheless, while reeling that triggerfish in I felt he was with me all the way; a priceless angling memory.  Needless to say, the fish was returned alive.  I have since retired the reel but only for sentimental reasons as it is still fully functional.