Laim Faisey, ever the adventurer, goes after blue sharks…on a kayak!

In my quest to catch big fish from the kayak my attention had turned towards the magnificent blue shark. An iconic summertime species, these sharks follow warm water currents up to the British Isles in late spring and stay in our waters until late autumn as the water cools. I’m lucky enough to live right on the doorstep of some of the most productive shark fishing grounds in the country. Cornwall offers great access to the most south-westerly, and usually warmest waters in Britain and the charter boats here enjoy some fantastic catches. 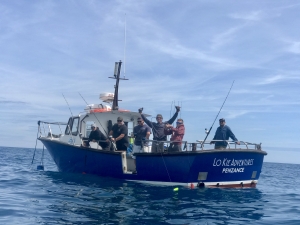 Bite Adventures,operating from Penzance, holds the current British catch and release record with a mega fish of 256lb (106in fork length and 44inch girth), so there are some real monsters out there to be caught. The average stamp of fish is 30-80lb and anything over 100lb is considered a specimen fish. One of this size would be a real achievement from the kayak. It was just a matter of working out how to get to the sharks.

The shark grounds can be found far offshore, much further than is realistically possible to access with a fishing kayak from the shore. Most boats steam 20 miles or more offshore to find these fish, and while the sharks do come closer to shore even a 10-mile offshore trip on a kayak is pushing the limits of safety. Not impossible, but such a trip requires a perfect set of conditions that are rare to come by. I have put in several exploratory offshore trips of up to eight miles from land but it is the several miles of tidal drift away from land at up to 2 knots that can potentially cause issues for the return trip. There was an easy way though – we could get a lift! 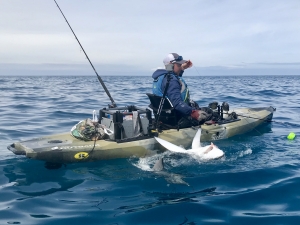 Now, before I go any further, I must say that Kieren does not offer these trips in any form. Ben had booked out the boat with some friends and a last-minute idea escalated into the kayaks being involved. I have good experience with shark handling, having caught many blues from the boat and having had several tope and one porbeagle from the kayak. Kieren knew the task was in good hands and, as a result, allowed us to take the kayaks. Other than the lift out, we would be doing this all ourselves. We had our own rods and reels, we made our own rigs, we would make our own chum and fight and unhook the fish ourselves if we caught. A few lads have now caught blues from mother-shipped kayaks here in the UK so we weren’t breaking boundaries here but we wanted to make sure we were doing as much of the effort as we could.

Ben had driven down from Lowestoft on the Wednesday and fished Thursday on the kayak finding one tope. I joined him after work for the evening but the fishing was slow. We fished for sharks the following day from friend Phil Curran’s private boat from Falmouth and with poor water conditions only found three blues, although a nice one of 87lb was a new personal best for Phil. We did manage a bucket of mackerel and scad that we would need for making chum. Ben was then out on Lo Kie all day on Saturday finding nine fish between him and his mates. I met them down at Penzance as they returned at 8pm and we spent another few hours making chum and preparing for the following day. Mashed up fish were mixed with bran and fish oil to make a rather potent and somewhat putrid smelling mix that would hopefully draw our quarry to the kayaks. As the light faded in Penzance we still had to get home and get the kayaks and gear ready. Who needs sleep anyway?

The boat was away at 7am so we had to be there an hour early to load on the kayaks and gear. We had to be prepared to be on our own in case we drifted in a different direction or at a different pace to the boat. We strategically loaded the kayaks and then our gear onto the boat so that minimal effort would be needed when it was time to get them into the water. We began the steam out, giving us plenty of time to get our rods rigged up and ready. You could almost taste the anticipation in the air, or was that the chum? 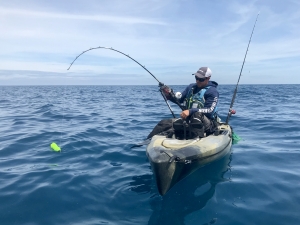 We would be using Fin Nor Lethal Variado 20-30lb class rods paired with Fin Nor Marquesa Pelagic 40 reels loaded with 79lb Daiwa J-Braid. A mono top shot lead to a 12ft rubbing trace made from 49-strand 275lb American Fishing Wire weighted with a 5oz lead. This terminates in a ball-bearing snap swivel onto which I can clip the bite trace. For blues I use 3ft of 275lb wire with a 14/0 Mustad Duratin circle hook. All wire connections are tied with a Flemish loop, double crimped and finished with shrink tube. It’s a tried and tested rig that I have caught many sharks on. Brightly coloured drinks bottles were employed as floats and a sliding stop knot would allow us to experiment with our baits at different depths.

The chum was bagged up into onion sacks and put into heavy-duty carrier bags for storage on the kayak. After much waiting the engine finally slowed up and we came to a steady halt. It was a bit of a team effort between everyone on the boat but we soon had both kayaks in the water. We drifted a little way from the boat, got the chum bags in and started fishing. We dropped hokkais down into the depths and were lucky enough to catch a few mackerel and whiting quite quickly for fresh bait –  perfect!

No sooner had we got out baits in the water, the lads on the boat were making noise as they had their first run and hook up. We had been there literally a few minutes!

The conditions were as near perfect as we could get. We were drifting fast and covering ground on the big spring tide but it was like we were on a flat calm lake. We were all prepared for being on our own and drifting at a different rate to the boat but surprisingly we stayed nearby for most of the day. This did mean we had to watch as the boat had hook up after hook up as our floats sat motionless. We had a few fish swimming around our floats but none went down to take our baits. Frustrating is putting it mildly! In fact, we had to wait until the last couple of hours before Ben piped up that he had a bite. 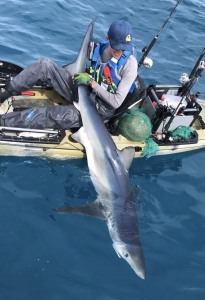 His float sailed away and he wound down into a fish that dived off to the depths. There was lots of excitement as he played the fish and we peered into the clear waters to get a glimpse. It looked to be a reasonable one and it was giving him a good work out. Eventually it was up on the surface and ready to be brought to the kayak. Gloves on, and Ben wired the fish like a pro, keeping good control of it beside the kayak. It was a lovely blue that Ben managed to pull onto his lap for unhooking and then hold up for a quick photo. A stunning fish in top condition that we estimated at the 70-80lb mark before watching it power off into the abyss. Result! The sharks now seemed to be on the feed as the boat had a double hook-up. The fish were here and I really wanted a bite. No sooner had Ben dropped his bait back in, a shark went straight for it and he hooked up again. I looked on in complete bewilderment as my bait had been in the water not 30ft from his! Another 10 minutes of battling and Ben had his second shark beside the kayak, a fish of around 50-60lb, which was quickly unhooked in the water.

A quick inspection of my rig and there was nothing to suggest I shouldn’t be getting bites. A fresh whiting flapper was hooked on and set back into the chum slick. I was like a coiled spring and I almost exploded with adrenaline as my float dipped and held just underwater. A fish had taken interest in the bait. It popped back up again before slowly sailing away. I wound down and took the weight of the fish before lifting into solid resistance. A few vicious headshakes and then it just steamed off on a run! Braid peeling from a reel on a tight clutch really is one of the best sights and sounds. In fact, this fish was taking quite a bit of line. A really decent first run that had my rod pulled down to the kayak with the tip underwater!

All eyes were now on me and I was feeling the pressure. The fish was deep and the rod was bent well as I pumped it back towards the surface. These were fruitless efforts however as the fish went on a few more good runs. After 10 minutes without seeing the fish, and having been pulled a little distance from everyone else, I was beginning to realise that this was a better one. A sulky fish that had no problem ripping braid off the reel, and with anymore drag I would have risked being tipped out the kayak! Another five minutes later and I could see the wire and a big blue shape below me. It took another 10 minutes before it was ready to come to the surface. Ben had now come over to see and we both knew this was a decent fish. Gloves on and I soon had hold of the bite trace with the shark thrashing beside the kayak. It was a powerful beast! We both said it was a 100lb fish and shouting back to the boat, now a few hundred yards away, they really wanted to see it. Somehow, I managed to pedal back to the boat with the shark in the water. With some help from the lads on the boat we managed to measure the fork length at 78 inches and the girth at 36 inches, giving a calculated weight of 126lb! 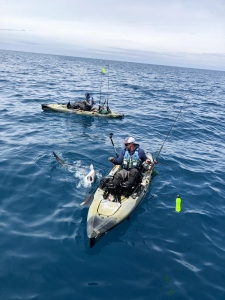 We managed to get the fish up on the kayak for a quick few photos before I gave it the kiss of freedom and watched it power off back into the blue. A moment of complete elation! What a fish for my first blue shark from the kayak and a big tick off the bucket list with a fish well over my target of 100lb.

We still had an hour or so to go so the bait was back in the water. Another fish was cruising about in the slick and ended up coming right to my kayak, nosing the side. I dropped my bait right in front of it and it soon homed in taking the bait. Shark number two was hooked up! Another great fight saw a fish of around 50lb to the kayak. I had this one on my lap for unhooking before a quick photo and release. I had one more run but it dropped the bait, but with two fish, including the biggest of the day, I couldn’t complain. We loaded our gear back onto the boat and then lifted the kayaks back on deck.

Our day had been a complete success with two sharks each. The lads on the boat also had a great time with 16 sharks between the four of them. We steamed back in completely exhausted but incredibly happy. Hopefully one day we will get the chance to try for them without the need for a mother ship, but for now we are content.