Like all of John Sherlock was desperate to get out fishing – and in late May he had a charter boat all to himself. 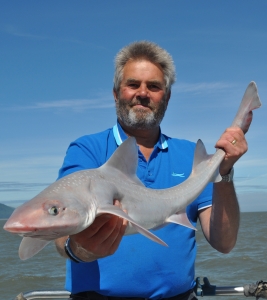 Last winter, although now perhaps just a distant memory was one of the worst for many years. My last venture onto a boat was on February 6th after that the next seven trips were cancelled, all with 40mph plus wind blowing from the south-west. I should have been reporting on pollack from the English channel and spring rays from Minehead but instead was at home pondering on what might have been. Then came the high pressure and sunshine everything was looking good for us to get out – but along came Covid 19 and the lockdown putting a stop to all forms of angling. Like many others my time was spent servicing reels and tying rigs ready for when we got the green light, I even made some multi-coloured wagglers for coarse fishing.

For once, we anglers were some of the first to be thought of, for as restrictions were lifted, we were able to dust off our tackle and get out there again. Facebook came alive with charter boat skippers telling all that they were ready for us again, offering trips for one angler at a reduced price  or various raffles linked to the Lotto bonus ball, trying to get us back onboard I was quickly on the phone to Michael Webber-Griffiths, skipper of Teddie boy III, at Minehead and the boat was booked for 26th May.

This gave me plenty of time to prepare, knowing the Bristol channel should be alive with my favourite summer species; the hard fighting smoothhound. My first priority was to get a supply of crab baits. Local tackle shops were offering a phone and collect service, I managed to locate 25 peelers from Tackle Trader in Newton Abbot and they were soon in my bait fridge which is now, hopefully, turned on for the rest of the summer. Unfortunately, with the number of hounds I was expecting I would need more, next was a trip to Teignmouth with a drop net to get some hardbacks, an hour or so later and there were 50 or so waiting for the fridge. That should be enough to get me amongst the fish. Then came a phone call from a fishing mate who said that his peeler traps were producing a reasonable amount of crabs and would I like help him to get some more, silly question. I had forgotten how back breaking this task was, but it was pleasing to get more peelers, softies and hardbacks and just to be out in the sunshine and fresh air again was great. I now had enough crabs for a good days fishing. 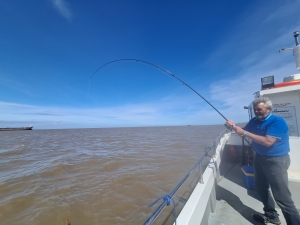 The morning of May26th couldn’t come quick enough, to say I was excited was an understatement. I was up early, packed lunch, bait in cool boxes several rods and all the gear stowed in the car ready for the trip. I arrived at Minehead to see a gentle South-westerly blowing, just chopping the sea up slightly and with the sun shining everything was set for a pleasant day afloat.

Michael arrived early and I boarded the boat full of anticipation. We had a quick chat about the precautions we must take in the current situation, he showed me the various containers of anti-bacterial gel and paper towels on the boat and explained that after every trip the boat was cleaned thoroughly and a small amount of bleach was used on rails and the toilet in line with guidelines.

I was not allowed in the wheelhouse in order to maintain social distancing but that was never going to be a problem. Michael said that he was happy to make tea or coffee as long as I had my own mug, again no problem as I always take my own. I also take water on hot days to help with dehydration.

Michael cast off knowing I wanted smoothhounds and headed for a reef mark just a short way along the coast just a mile offshore from Dunster.

With the anchor set and the boat sitting nicely in the tide I set up two rods, the first my trusty Conflex Integra uptiderwith a fixed spool reel, and sent a peeler bait out into the murky waters of the Bristol channel. The second rod was a 12lb class rod and small multiplier loaded with 40lb braid this was baited with a hardback and sent off down-tide with an 8oz weight in a steady tide. Both rigs were just simple running ledgers, one with Pennel rigged Varivas Big Mouth Extra hooks and the other just a single hook, the sizes being 5/0. I always use a minimum of 80lb mono on smoothhound rigs as anything less can be bitten through easily.

I had seen on social media that the Bristol Channel had been fishing well so was a little disappointed when the bites were not instant. I took this as an opportunity to set up a third rod this time a Fladen Maximus Shadow solid carbon rod and again a mutiplier loaded with 40lb braid. Again, a running ledger and a pennel rig were used but this time baited with a strip of bluey as the mark had been producing some nice thornback rays. All rods were tied to the rails as the takes in the big tides can be savage and I didn’t fancy having to explain to my long suffering wife that I needed a new rod and reel as one had been lost overboard. When the bites came they came in waves as would be expected with these pack fish passing by, and with Michael taking the opportunity of a quiet boat to fish himself it wasn’t long before we were both fighting fish at the same time. For the next couple of hours the fishing was steady with plenty of hounds coming aboard, sadly no rays put in an appearance. One surprise catch here was a strap conger on a hardback although I have caught them on peelers before. 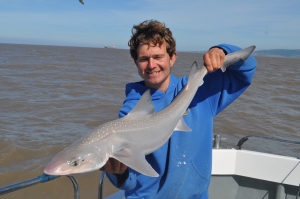 As the tide eased Michaels suggested that I might like to try a mark a little further out to try for some of the big blonde rays that he had been catching. After a short steam fish baits were lowered into the water. About an hour and a half later only one small blonde to Michaels rod and with slack water approaching we went off to another mark back towards the harbour where some good hounds had been showing.

This proved to be the last move of the day the fishing here again was steady with plenty of hounds coming aboard. Having landed a good number, it was time to experiment a bit. I had another couple of rods with me that I wanted to try to land a hound on. the first was an old carp rod onto which I put a 4000 sized Diawa fixed spool reel loaded with 19lb braid and a 30lb leader. The tide wasn’t running too hard so I lobbed a 4oz Gemini lead up-tide with a small peeler baited and sat and waited. A savage bite followed soon after and on light gear I had as tremendous fight from a hound of about 12lb, one of the biggest of the day. I stuck with rod for a while and enjoyed some tremendous sport. Time to try another rod, this time the Yuki Neox quiver tip along with the Yuki  Level 700 fixed spool reel and 40lb braid, I had landed strap congers and dogfish on this before but wanted to see how it would perform with a Hound. It did not let me down. I fished it as an uptider with 7oz of grip lead, the tip behaved like the carp rod whilst the rest of the rod had more power to fight the fish the reel drag was exceptionally smooth making the fight a joy. Both of these rods will be used again when hound fishing.

I did manage a solitary, small, thornback from this mark and with an hour left to fish Michael and I decided we would fish hard for the hounds and try to get the numbers for the day up to 40, we had already caught 30. With some peeler and plenty of hardbacks left all rods were baited with crab. By the time the anchor was hauled in we had managed another 12 giving us a total of 42 hounds and 2 Rays I also managed 7 strap congers and I mustn’t forget the 25plus Dogfish, all this in 9 hours at sea and only 8 miles travelled.

This was a great day’s fishing and Michael was good company as ever and showed what an excellent skipper he has become, finding the fish and also catching them. It must be every anglers dream to have a charter boat to himself and although I enjoyed it thoroughly the jovial banter with other anglers was missed. As I write this, I hear that restrictions have been lifted and small groups will be able to fish together again, I look forward to meeting up with fishing mates again in the near future.

I arrived home a couple of hours late extremely happy but feeling as if I had be mugged. 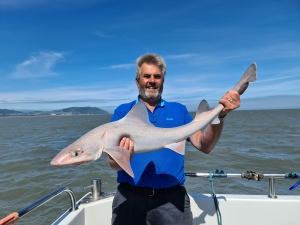 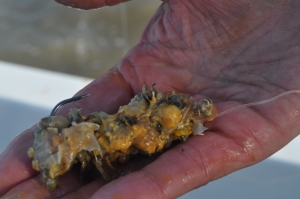 If you want to fish for these hard fighting fish or any of the other in the prolific waters of the Bristol Channel then get in touch with Michael on 07894 536672, www.teddieboycharters.co.uk  or his father Steve Webber on 07967362132, www.ospreycharters.co.uk or you can contact them via their Facebook pages. 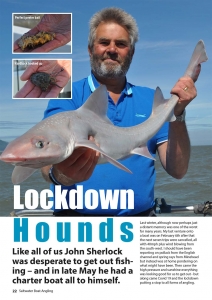 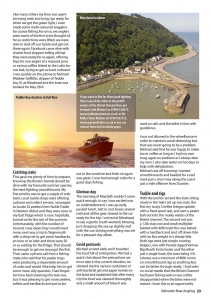 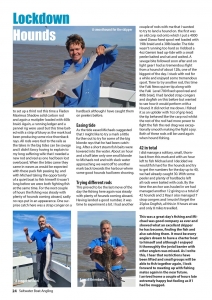