Jeff Smith gets stuck into some excellent tope fishing and goes after a personal best. 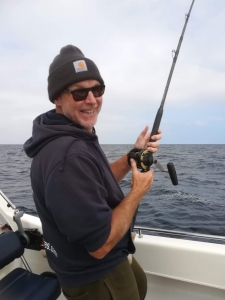 The waters of the Eastern Solent have long been associated with good quality tope fishing. As far back as the late 1950s, inshore dinghy anglers have enjoyed excellent sport and several marks mentioned in Hugh Stoker’s 1963 Angling Times publications – Sea Fishing in Sussex and Hampshire, part of a series of fishing guides that are still relevant today.

Of course, in those days, fish in general were far more plentiful and inshore tope populations were prolific enough to even provide the shore angler with a chance of a reasonable specimen. Several records exist of big tope captures from Solent beaches and angling journalist Clive Gammon’s exploits with Welsh shore tope are also well documented.

Phill Williams’ superb potted history of 20th century sea angling mentions that, from 1959 to the early 1980s the ‘Tope Angling Club of Great Britain’ was in existence, an organisation that often ran inshore boat competitions which, with the rise in popularity of VHF radios and the ability to communicate between craft, resulted in a long overdue ‘catch and release’ approach being adopted in the latter years of the club.

Nowadays, tope are a protected species and must all be returned, the result of which is that the British rod caught record, a fish of 82lb 8oz caught from Bradwell, has been in existence for nearly thirty years and, unless there is a change in the B.R.F.C rules, is likely to remain unchallenged for the foreseeable future. In the intervening years however, there have been several incidents of bigger tope captured and released by anglers, some of which have been reported in my local area. My own more modest personal best, is a fish of 51lb which I was exceptionally pleased with, but it’s intriguing to think that there’s a real possibility of something really special turning up. In my opinion the actual weight of the tope I personally encounter is irrelevant as even a modest sized tope is an exciting sporting fish and tremendous fun to catch. The arrival of ultra-thin braided main lines in the 1990s, that we modern dinghy anglers take so much for granted, must have had a tremendous impact on tope fishing, as it opened up fast tide, and deep marks previously unfishable with mono filament lines, and allows us to use much lighter tackle.

My heavy and floppy actioned 1980s glass fibre self-built Conoflex boat rod complete with a bulky Mitchell 624 filled with 30lb mono, is a far cry from the ‘stick thin’ carbon fibre ‘wands’ matched with tiny braid loaded lever drag reels that we use nowadays. Eastern Solent tope generally arrive from approximately mid-April onwards-the majority being larger females which are thought to release their pups in deep, localised areas. Local opinion suggests that, by June the species will spread out, mostly over cleaner ground and indeed recent reports by my local charter skippers have backed this up theory with some hard evidence. By mid-May, with the easing of the lockdown restrictions and the opening of the harbour, we were able to go fishing again but, with some additional safety considerations.

The decision was made, along with my regular boat partner Brian, to venture out in our individual boats but maintain contact when at sea, thus reducing the risk even further of having to call for lifeboat assistance in the unlikely event of a mechanical failure, both of us being more than capable of towing each other ‘s boats back to port if required.

We tried briefly en-route to secure a supply of mackerel but they are still conspicuous by their absence and we settled for our supply of frozen bait which, on the day, proved to be effective enough but, given the choice, I’d always opt for a fresh bait. As I write this a few mackerel are beginning to show inshore which bodes well for future trips.

Anchoring a mark which put our rigs in 100ft of water, and with the neap tide ebbing steadily, it took just minutes before our rods were arching over and the clickers sang their song. When tope fishing, I tend to secure the rod firmly in a holder, and slacken the lever drag on the reel so that there’s just enough resistance to combat the tide, as even the smallest tope is more than capable of dragging an unsecured outfit over the side in a split second. Bites are sometimes signalled by a couple of nods before the fish moves off with the bait although frequently, the first indication of any interest in the bait is shown by a full blown run and when using two rods, it’s a common occurrence to have a fish on both at the same time which suggest that even the bigger fish might hunt in packs.

Using circle hooks the line is simply tightened up once steady movement is detected, and the rod bent into the fish resulting in a perfectly clean hook up although, in my experience, they tend to cleanly hook themselves anyway which is useful when a double hook up occurs. Tope will often run quite quickly up tide and several fish tried this tactic on the day, resulting in me playing fish with the rod pointing towards the bow. 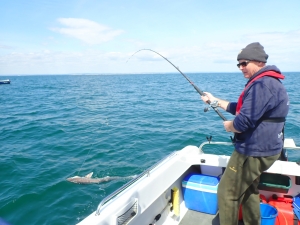 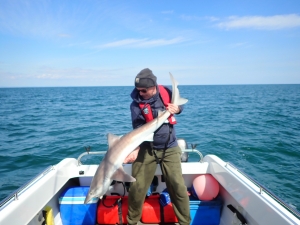 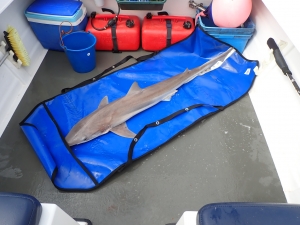 Occasionally, particularly when using frozen mackerel at slack water, bites can be a little finicky, the bait often being dropped suggesting that a smaller species is making an inquiry. Employing a little patience and sometimes giving a bit of slack line, it’s quite surprising just how many of these tentative bites turn out to be sizeable tope.

As the ebb tide ran its course my diary shows that, at that time, I’d had ten tope to the boat, most released at the side using a T-bar, and one brought on board for a picture opportunity at 34lb, the rest all being estimated at over the 20lb mark. The slack tide and beginning of the flood brought me seven more good fish with a best of 155cm, weighing just over 41lb but, as the flood gathered pace it became much more difficult to hold bottom compounded by building wind backing the tide causing my anchor to drag slightly. Our combined records show that this pattern of feeding is actually quite consistent on the mark with the ebb tide historically being far more productive than the flood although, our statistics could be slightly influenced by the fact the flood tide current is much stronger, and more difficult to fish effectively.

Whatever the case, it’s been useful to gather this information over the visits in recent years, and helps in the planning and timing of future trips. With a couple of hours left before having to return to port before the tidal ‘lock out’ we decided to head  to shallower grounds to see if any tope had migrated to the inshore marks and , despite being less productive, a couple more decent sized fish, along with some ray action, were added to the tally which finished up at 31 good tope between us – a very good day’s fishing by any standards. 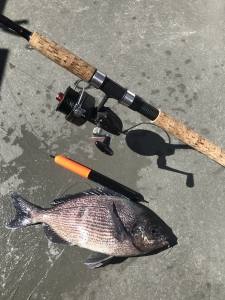 As I write this piece I’m carefully watching the wind speeds for the next set of neaps which will occur in a few days time and hopefully see us return to the tope grounds but, in the meantime, I’ve also had several trips for other species during late May and early June.

Along with some bass and wrasse lure action over the rock, baits have seen some excellent smoothound and ray fishing on the mixed ground marks but, surely the most fun has been had targeting black bream…..but on float gear. It’s early days yet but the method has been very effective and entertaining over the slack tide period when takes to bottom fished baits tend to slow down a bit.

Light spinning tackle can be used with a 100mm sliding cigar float supporting about 25grams, the bait suspended at varied depths above the sea bed. Even the smallest of bream give the most savage take literally ‘burying’ the float and interestingly, on my last trip the method also tempted a tidy bass from a shoal that appeared to be lying dormant on the fish finder at slack tide, and completely ignoring my lures.

Finally, as a follow up from last month’s entry, Brian has now completed construction of his oversized landing net designed with big blonde ray in mind. For those interested in making one for themselves, the 900mm diameter frame is constructed from a 30 x 4mm alloy strip bolted to a square sectioned hardwood handle, and the mesh is woven from 2mm thick bonded nylon. Despite its voluminous size, it’s relatively light, certainly feels more than strong enough for the job in hand, and should easily accommodate even the biggest blonde we’re likely to encounter.

Other good news is that our local charter fleet appear to be making something of a post lockdown comeback albeit with limited crew numbers to maintain social distancing. Whilst realising that it might cost a little more per head for a trip out, with the smaller number of anglers on board, I don’t think there’s been a better time to give it a try. Tight lines.