It’s good to be back: Kyle Waterhouse is finally afloat off the Northumberland coast after months under lockdown. Here’s what happened. 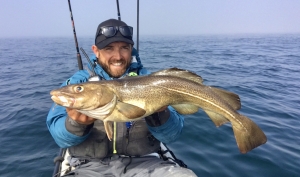 As the country begins to ease some of its lockdown restrictions, it has felt fantastic to be able to get out onto the coast again. With fishing recently getting the green light again, many anglers have welcomed the chance to get out once more. I’m one of the fortunate ones who lives by the coast and being able to fish without the need for any excessive mileage has been a blessing which I did not see coming.

Exploring my local Northumberland coast was the agenda and it’s something I’ve been meaning to do for quite some time. I’ve walked most of it and fished parts but I really wanted to get further offshore on the kayak and sample the cod fishing. With such fabulous spring weather and an unusually free schedule, now was the perfect time to try.

Great for cod on lures

The North Sea has long been recognised as a great cod venue and the North East is certainly a hot spot for these tasty white fish. My cod fishing has always been limited to bait fishing, usually at night, so the prospect of lure fishing for them was exciting. With the average inshore depths of around 50-80 feet, I needn’t be using heavy tackle and I planned to scale right down.

Cod aren’t renowned for powerful fights, though by going light you can make the most of what they offer. A fish of 5lb+ on a 10-30g spinning rod does go well, so that would be how I’d approach it. Cod like lures fished tight to the bottom and any small shad or sandeel pattern would be ideal. Thankfully this style of fishing is just the same as how I fished for bass down in Devon so it was nice to practice a familiar form of fishing that I’d otherwise left behind when I moved. 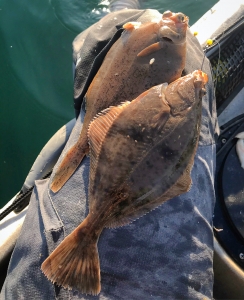 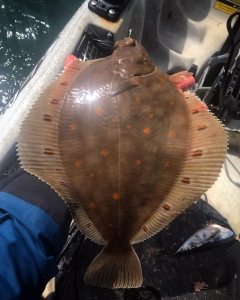 From chatting to some of the local anglers it would appear the cod are around for much, if not all the year. They tend to move onto the reefs in late spring and the average size is said to creep up as the summer goes on. Fish of 10lb+ and even the odd 20lbers are quite common, so there was the real prospect of a big fish.

The struggle in the North East seems to be just trying to get out all. As the coast is very exposed you need settled weather and small tides in order to do it safely on a kayak. I’ve found that even in light winds that I’d normally get away with on other coasts, they would cause me trouble here. Any northerly or easterly winds usually mean the sea is too lumpy or coloured to enjoy. Since a lot of launches are off the beach, it’s also very unappealing doing so through surf!

Southerlies are do-able if it’s light enough, though if it creeps up to above just 10-12 mph this can cause confused seas against a flooding tide which flows south. The ideal wind conditions would be a light westerly, a very light southerly, or better still, nothing at all… though we all now how rarely that happens!

The reef areas I wanted to target were around 1-2 miles offshore and in my Hobie I’m quite confident I can dash back in from that distance quickly, should conditions deteriorate. For the first few trips I planned to fish with local angler John Ord and his experience of the coast was very helpful in getting me started. He’s well known on the kayak scene and is a team member for Jackson kayaks. He also runs the local NE kayaking page on Facebook and had fished the area all his life and like a lot of my northern friends, he was very forthcoming in giving me help and advice.

I’d spent some time during lockdown using the Navionics app to identify some fishy looking spots and if you haven’t used this app you really need to look. It was nice to have John confirm he had fished a few of the spots I’d found and he had plenty of stories to share. 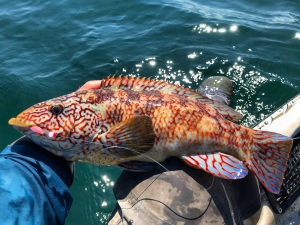 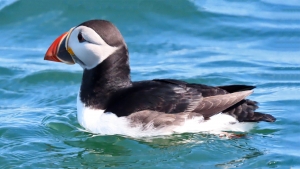 You are spoilt for choice in Northumberland and nearly the whole area looks tasty. There’s lots of very broken ground, big drop offs and islands to aim at and the wildlife is superb. The coast is home to an abundance of bird life, with puffins, gannets and guillemots. We’d already discussed many launch options during the calm weather. Our first trip would be out of Cresswell, to an offshore reef system known locally as the skiers. It was seemingly a very popular spot and I’d heard good things about it. We’d be launching just a few days after the fishing lockdown was lifted and there were no fewer than a dozen private boats and several kayaks in the area when I arrived in the morning.

It was obviously a well-known place and that filled me with confidence that there surely must be something around. Thankfully, despite all the boats, the area was huge and easily able to accommodate a couple more kayaks. I arrived early and was pretty much ready to launch before John even arrived, I was feeling keen. Thankfully he didn’t faff about and after about fifteen minutes we were heading out offshore onto glassy water and both full of anticipation. 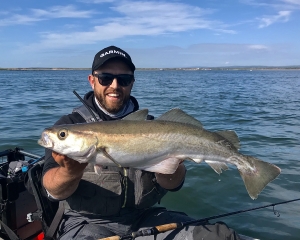 The Skiers are over a mile offshore, though it didn’t take long to get out there. The ground looks awesome on the fish finder with jagged reef rising and falling between 30-100 ft. We’d be drifting whilst fishing vertically with small shads on our light set ups. It didn’t take long and I think I had the first cod onboard after about five minutes. Much to my delight as it was my first cod on lures from the kayak.

After that, it went frantic, with countless cod falling for the light tackle approach. I think we could have filled the kayaks three times over had we wanted and most fish were an edible size between 2-4lb, with the occasional 5lb plus fish making an appearance. It was fantastic fishing and according to John this was quite normal too. I was more than pleased with some action having not been out at all since my trip at the start of the year and filling the freezer was also a bonus!

Lots of wrasse and flatties

Among the cod, it was nice to see a few decent wrasse too. I didn’t know they were around in any numbers in the North Sea but apparently, they are more common these days along with the odd Bass too. All the wrasse had extremely vivid markings so were a joy to see through the clear water and as ever they were great fun to catch on the gear we were using.

After we’d found enough cod for the table, we decided to head inshore to see what other species there were over the clean ground. This isn’t something many people do up here and since I’d heard rumours of Turbot and other flatties being caught along this coast, I felt I should have a look.

I hadn’t seen reports of any monsters landed, though I’d hazard a guess that very few people target them off a kayak and sometimes just getting a bit further offshore can make a big difference. It was worth a few drifts anyway, so I quickly rigged up my 6-12lb Shakespeare Ugly Stik with a flattie rig and began some long and quite fast drifts over the sandy ground off Druridge Bay. I’d only brought a few packs of old freezer burnt pike baits with me, so held little hope of attracting much. Thankfully, I needn’t have worried as the flatties were very obliging and a constant stream of flounder, dab and plaice attacked my mackerel strips!

It was great fun and a really nice way to finish off a productive day. After about an hour I’d completely run out of bait and was heading home with two lovely plaice and a kayak full of cod for my efforts. I hadn’t found the elusive turbot, but seeing an abundance of cod, flatfish, wrasse and pollack certainly changed my opinion on the fishing up here. It’s not all about the cod and I’m excited to see what else can be had by thinking outside the box. Let’s just hope this fantastic weather holds on a bit longer as I’m sure we all need more therapy days like this on the water. 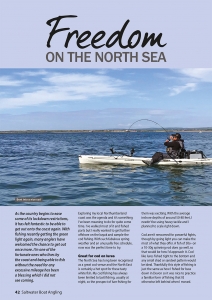 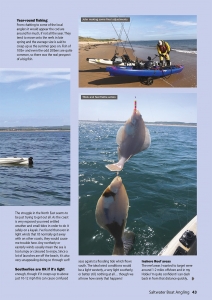 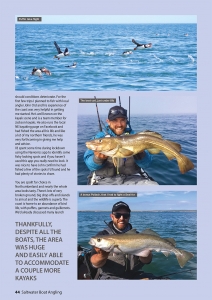 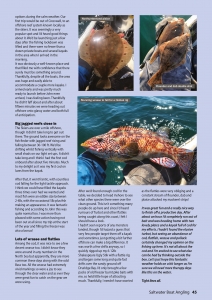