John McMaster reports on the 2019 event

The recent shark handling debate inspired the Falmouth Festival organisers to review their event format.  Their decision was to have skippers share their catch information in real time so only the largest fish needed to be brought aboard and measured. A ruling that only barbless circles could be used, enabling the others to be released at the side of the boat, and a policy of tagging those brought aboard completed the event format upgrade. 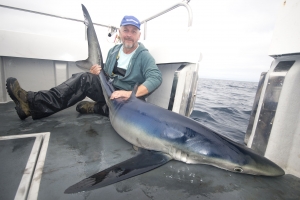 Some skippers believe fish released at the side of the boat don’t spook the others in the slick as much as if they are boarded then released. If that’s true this may have been a contributing factor to the successful catch and release of 44 sharks during the 3 day event by the 16 competitors.

David Turner, sadly no longer with us, was one of the initiators of the Falmouth Festival so having his wife, Margaret Turner, to present the trophies was very special and much appreciated by everyone.  As usual the event entrance fee (£20) was donated to the RNLI. 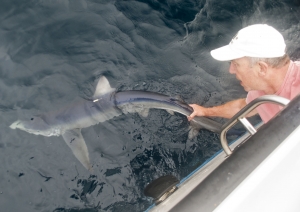 Andy Howell, skipper of Anglo Dawn, commented, “ the new festival format was very well received and enables us to continue to reduce the risk to the sharks. We are already looking forward to the 2020 event (dates are 18th, 19th and 20th September) when we are hoping to have another Falmouth Festival first and find a winner for the Ladies Trophy.” 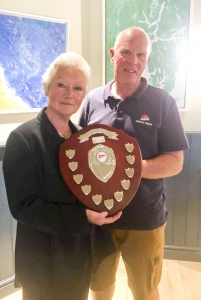