Shaun Pedley, one of the West Country’s best skippers show why Devon is such a great place to fish 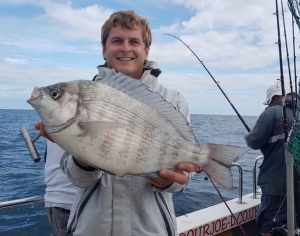 The attraction of fishing the English Channel is well recognised on the UK Sea Angling scene. In years gone by, many anglers travelled down the M5 to the South Coast of Devon to fish for different species on well -known charter boats and shore marks. Last month’s issue included an informative feature on the fishing out of the port of Brixham, Torbay, South Devon and included the record fish caught locally over the years.

Simon, Sandra and Shaun Pedley have been hosting Fishing Holidays from South Devon for over thirty years and know a thing or two on how to accommodate all varieties of anglers. Simon Pedley, a well-respected skipper, has now passed the helm to his son, Shaun who is also a quality skipper of many years in his own right. Shaun is as hungry as ever to find some lucky angler their new personal best or even the fish of a lifetime along with a decent days sport.

Sandra and Simon Pedley run the Parkholm Hotel (or as the regulars call it ‘The Ranch’) which is the real home of their Devon Fishing Holidays. Their focus accommodating anglers with ensuite rooms, plenty of room for all their tackle (and we all know how much stuff we all lug around -even when on holiday), freezers to store the catch and bait, plus freshly made packed lunches each day to enjoy at sea. Situated in the town 200 yards from the seafront, the hotel is very convenient for the evening entertainment of bars and restaurants along the seafront.  Occasionally, some anglers do forget they’re fishing the next day when enjoying the evenings here in the summer but, hey, it’s a holiday after all and we’ve all been there!

After a full english breakfast, cooked by Sandra at the Ranch ,and a 5 min walk to the boat on a summer morning you’ll be heading to sea aboard the very well kept Offshore 105 ‘OUR JOE – L’.  Shaun will always have a game plan for the days fishing and normally manages to accommodate everybody targets during the week.

Early in the year the fishing is mainly either drifting the mid Channel and inshore wrecks for hard fighting pollack, ling and cod or fishing the Skerries Bank for the big plaice its famous for – and also blonde and  other ray species . The true beauty of a week-long fishing holiday is that there is time to fish for almost everything on offer over the 5 days with Shaun.

During the later months of the year from July onwards we turn our attention to bass and targeting the larger black bream from the many wrecks off-shore.  Shaun has proved, as his father did many years over, to have the knack for black bream fishing. The biggest landed in 2019 was a 5lb 5oz monster – which was well decorated in prizes including Best Specimen Black Bream at Wyvern Sea Angling Presentation . It also won the Top Wreck Fish in the Torbay Sea Angling Festival for Paul.

Shaun also plans a couple of special holidays each year where he takes a crew to venture over to the Channel Islands  where they fish the banks for prime turbot and brill – this is usually during either early or late summer. 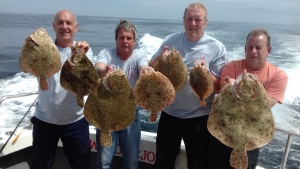 Hundreds of wrecks scatter the English Channel’s sea-bed, Most from WW1 and WW2 but also a majority from local fishing harbours and the busy shipping lanes that run up and down the channel. Some are small and mighty some are huge bulk carriers like the well-known wrecks of the Muree and the Ice Prince.  Shaun always works very hard for his anglers – maximizing the catch rate means happy anglers and his clients rarely go away empty handed (although as we all know it can happen).  Some days we visit the famous Hurd’s Deep, featured in an issue earlier this year, to fish the deepest wreck in the English Channel. It is a big challenge for any skipper but the catch is always worth the effort. 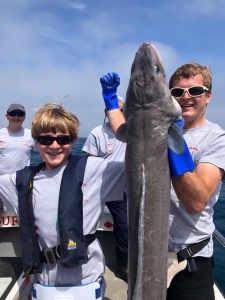 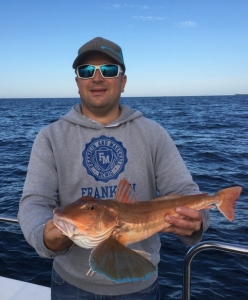 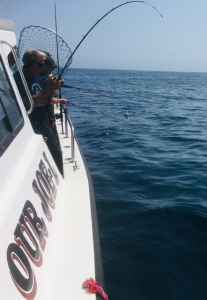 The late Vic Evens caught the World Record Conger Eel of 133lb aboard his own charter boat Sea Spray from Brixham in 1995 (Featured in the last issue) and Vic has  fished for conger aboard Our Joe – L in various competitions many years after he landed that epic fish. More and more anglers are taking the bait and finding the appetite for conger eels, especially in the last year or two, around South Devon. Shaun is taking an increasing number of charters to target them and is hunting for another 100lber for Our Joe – L. It’s a life-long dream for most angler that only few skippers have ever succeeded, Simon Pedley being one of them. 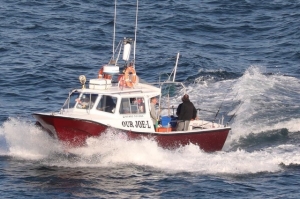 with every angler receiving a free T-shirt to mark the occasion.

The Fishing on the wrecks started off brilliant, with regular catches of pollock and cod in a fair number out Mid Channel. But with one of the worst May Blooms in recent years, the lure fishing soon became hard work with only the occasional productive day when things cleared up. With that in mind, more bait fishing was the plan and with days on the Skerries Bank producing good numbers of Plaice, we couldn’t really complain.  Fishing the reefs for Wrasse, Bream, Bull Huss and alike, we had a small Red Mullet to add to the species list. When I steamed out to the wrecks, it was mainly for the Congers and Bream. 2019 saw a brilliant year for Eels which were fished for at anchor. One Channel Island Holiday was cut short due to the weather which was a real shame, as it was just as some decent numbers of fish were showing up over on the Banks of Alderney. The year was rounded off quite fitting, as we won main prizes at both the Torbay and Dartmouth Fishing Festivals and Dartmouth Fishing Festival. The highlight was receiving the Torbay Top Charter Boat Skipper Award, which both Simon and Shaun have now won in the competition history.

Some of the bigger fish last year include;

Fishing for the future

It is very important now, more than ever, that catch and release is practised on most species. Even though we are situated out of the Black Bream Conservation Zones in the English Channel, plenty of bream are seen swimming back down alive and well.  I also cary aboard a bin for all used monofilament fishing line, to be recycled by the Anglers National Line Recycling Scheme. I usually take it to Graham at Brixham Bait and Tackle shop when it’s full.

Shaun now runs Our Joe – L year round offering the fishing holidays in Summer from Torbay and Winter Fishing from Dartmouth (Oct – April). Give us a call to discuss your next Fishing Holiday, with prices for 6 Nights and 5 Days Fishing at just £515pp with shorter Angling Breaks and Charters available upon request.  Individual Fishing from 6hrs angling to 18hour Hurd’s Deep trips.

Found on all Social Media @PaigntonBoat 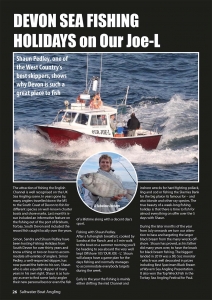 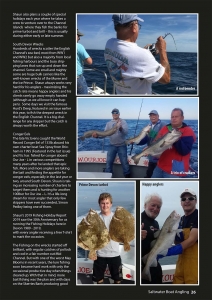 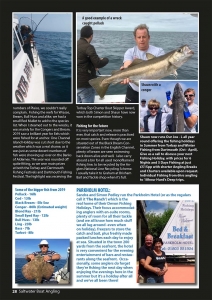