Paul Sharman visits one of the most fabulous angling venues in the world and goes after the king of fish. 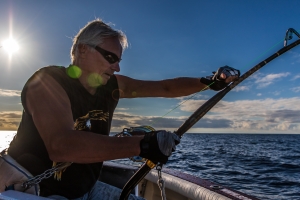 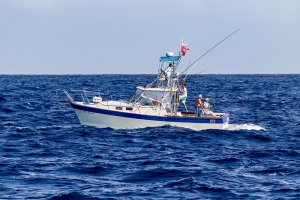 In a single bound, Miguel had leapt to the rear deck from his seat high on the flybridge next to his father José. He had been watching the spread of lures trailing behind the boat like a hawk and had finally seen what he was looking for. “Marlin, marlin!” he shouted excitedly. All eyes were straining instantly to try and spot a tell-tale sign of a bill or a disturbance behind the lures when one of the rod tips to our right bounced heavily. The outrigger clip that its line was connected to burst open under the sudden pressure from a take somewhere back in the wake and line immediately started to pour off of the spool to the tune of a screaming drag – a big game anglers’ dream, and particularly satisfying when you are in the middle of a tournament as we were.

The Clube Naval de Ponta Delgada is ground central for the annual Azores Big Game Fishing Competition, held each September on the beautiful main island of Sao Miguel in this stunning archipelago of islands located 850 miles west of Portugal out in the Atlantic, and just a two-hour flight away from Lisbon. Three days of fishing for marlin and tuna, with a rest day in-between to break things up a little and give the anglers a chance to see the island’s highlights with a tour included in the tournament package. There is also a second tour on the last day before the evening awards ceremony and dinner. This very warm and friendly tournament attracts many of the same anglers back year after year, always hoping for victory of course, but equally just as happy to be back in these welcoming islands, one of Portugal’s two autonomous regions along with Madeira (another famous marlin hotspot).

Teams from all over the world

This year saw teams entering from as far as away as Sweden and the Ukraine, with a regular team from mainland Portugal also joining in the fun alongside the several local Azorean teams. In previous years others have travelled from places like Russia, France and the USA to take part too. It really is a great tournament to sign up for if you want to give big game fishing a try or have been perfecting your techniques and want to try them against some other anglers in competition. The local boats and skippers are all very experienced and able to provide all the gear you need. You can find their contact details on the tournament website under the “Information” section whether for the tournament, or a visit at any other time of year.* 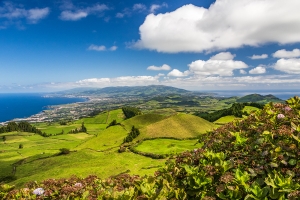 Being of volcanic origin (there are still some active areas of thermal springs and geysers), means that the fishing grounds start as soon as you leave the harbour. The Atlantic seabed drops away quickly, allowing schools of large bigeye and yellowfin tuna (“cows” as the Americans would call them) as well as blue and white marlin, to swim relatively close to shore, following the bait schools. There are other banks and high spots of course further out and every skipper has their favourites. So once the boats assemble at the mouth of the harbour each competition day for the official start, given over the radio from Clube Naval, much interest is taken in which direction each boat takes. Are they taking the long ride south towards the high spots near Santa Maria island, east along the length of Sao Miguel past the pretty seaside town of Vila Franca do Campo maybe? Or perhaps just hanging a right outside Ponta Delgada’s harbour and the airport and staying close to the nearer western part of the island? It is this latter choice that long-time skipper José Furtado aboard Alabote, a 32ft Bayliner Explorer, chose to make on the first day of the competition, and it is one he would not regret come the end of the week.

The seas around the island of Sao Miguel are, as he told me, his “backyard”. He grew up exploring and fishing them in all manner of small vessels, before finally purchasing Alabote back in the late 90s and has run it as a sportfishing boat ever since. As it happened, his two visiting anglers from Sweden, Stefan Lindnert and Ole Pedersen, were a last-minute entry as “Team Sweden” thanks to good timing more than planning they told me, having scheduled their holiday without knowing about the tournament. They had fished aboard Alabote previously and had returned this year determined to catch a marlin. Little did they know what lay ahead for them.

That first day out at sea, passing the local squid boats as we trolled along the outside of Sao Miguel, the wind was up a little but nothing too dramatic. Alabote handled it easily, and we were even treated to the site of a humpback whale taking a couple of breaths before deep diving, with the classic view of the tail descending vertically which was the last we saw of it. It was probably also hunting the squid that the local fishermen were after. As most skippers often do, we were working to a pattern centred on past catch locations which had been entered on the GPS. 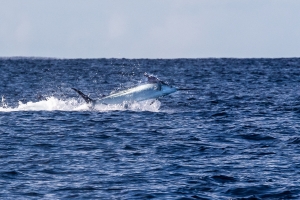 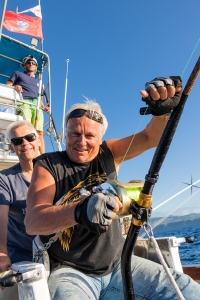 We had made several passes up and down before Miguel made his dramatic and very athletic leap to the deck next to us. Ole was up first so was quickly in the fighting chair while Miguel picked up the rod with the running fish and placed it in the chair’s holder. Meanwhile Stefan helped clear the other rods and lures out of the way before assuming his position behind Ole, where he would swivel the chair to keep Ole facing straight on to the fish while he began the fight.

We saw some mighty splashes in the distance as the blue marlin thrashed on the surface while making some low leaps out of the water – absolutely thrilling to see. I’m not sure Ole was so pleased when he saw the distance of line he would have to recover before this mighty fish was his. But anyway, he knuckled down and started the mantra of short pump and wind while José backed the boat down a little also to help cut the distance. From his vantage point up above, he had a better view of which way the fish was going and so also steered the boat to keep the stern as face on to it as possible. This was a real tug of war, line was retrieved slowly, but then lost again as the marlin powered away. Muscles were straining, and in the heat of the day perspiration was starting to pour off Ole as he continued to focus on his mission, all the time with encouragement from Stefan and Miguel.

Pulling in line by hand

At some points he literally had to resort (with his gloves on) to pulling the line in by hand a short length at a time while the other hand took it up on the reel, just to see that he was making progress. This fish was stubborn but as time wore on and the hook stayed put, slowly it began to tire, run less, and inevitably come slowly closer to the boat. Now all eyes were watching out for any sign of the fish in the water and soon we had it – a flash of silver in the depths – “colour!” the cry came. 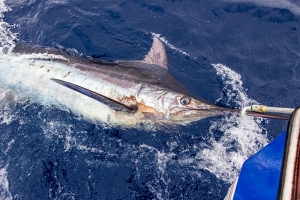 The most important thing now was to ensure this was a legal catch under the tournament rules. As Miguel carefully took the line in his hands, he began to drag the fish up to the boat, closer, closer, until the join in the line where the leader led to the lure and the fish was spotted. It was imperative that the team touch the leader below this knot, in this case Stefan, which would classify this as a catch, no matter if the fish then fell off the hook, for example, next to the boat. Of course, with a fish of this size and weight, the line does not just come straight to you next to the boat, some judicial stretching was called for over the side, but Stefan timed it well and the catch was made. 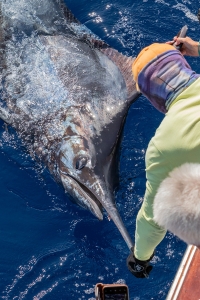 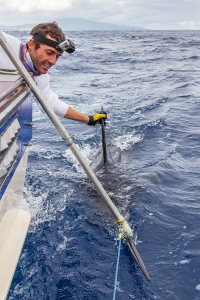 José now followed Miguel’s lead and was down on the deck in a flash to help get the fish safely alongside the boat so the lure could be retrieved, and most importantly now, to revive the fish and get it released safe and sound back to the ocean. A special tool with a coil of metal protected by a sleeve on a long pole is gently placed over the bill and is used to help hold the fish next to the boat while it slowly continues forward, forcing oxygen over its gills to help it get its breath back. Miguel also held the fish upright gently by its dorsal fin. The hook had been wrapped around the base of the bill and came off easily, maybe too easily, but it had done its job and held until then, so all was well. Soon we could see the marlin taking long sweeps of its tail and obviously well recovered. The bill tool was slipped off and we watched this magnificent fish slowly swim down and away into the dark blue depths.

You’ll be glad to know that Stefan also got his marlin that same day. Another lovely fish of several hundred pounds in weight just like Ole’s. This put them in the lead of the tournament – quite a way to start. But that was not all. While the other skippers struggled to find just the occasional fish, José stuck to his game plan. Where there were two marlin, there were likely to be others, and it paid off – big time! On the two other tournament fishing days, Stefan and Ole managed to catch another two marlin each day, as well as losing another two or three also. Some of these fish were tagged, adding to the science gathering effort of the Billfish Association. This total of six fish easily won them the 2019 Big Game Fishing Azores tournament – Team Sweden were champions and they vowed to return again to defend their title next year. Maybe you will consider forming a team and joining them in the wonderful Azores? You won’t regret it!

*Please note the correct website address for Alabote is https://sportfishingazores.com

Azores Airlines – during the summer months, Azores Airlines run a direct flight from London Gatwick to Ponta Delgada. Check for details on https://www.azoresairlines.pt/en

TAP Air Portugal – the majority of flights are with TAP via Lisbon. Details at https://www.flytap.com/en-gb/ 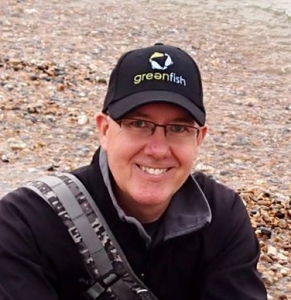 Paul Sharman has been writing about, and photographing, great fishing adventures at home and around the world for the last 20 years now. He fell in love with the Azores on his first trip to the tournament back in 2014, returning again in 2016, 2017 and now 2019. His next mission there is to take some time to explore the coastal and freshwater fishing further, and maybe even catch his own marlin too! Get in touch with him at psoutdoors@gmail.comor via his website athttps://paulsharmanoutdoors.com.