Tim Macpherson gets a chance to preview Lowrance’s exciting new fish finder for the kayak and small dinghy market.

Marine electronics are an essential part of every boat anglers arsenal of tools to make boat angling more productive. Getting the right one for your budget and your requirements is essential and there is a wide range of products available. And they’re being constantly upgraded and improved as the technology and software improves and becomes more accessible.

So, I was very excited to be invited, by Lowrance, to try out their new product, the Hook Reveal on the boat of World Predator Classic organiser, Ross Honey, along with expert bass angler Glen Milligan.

The weather wasn’t great, in fact it was atrocious but in the relative shelter of Chichester Harbour we did manage to get out and try the unit out.

First thing to say is the price, I couldn’t believe how well priced it is, starting at round £300. The clarity of the images and the depth of features are really impressive. The demo I saw in on dry land took no time at all because the keys and functions are so easy to use. It has what is called a “phone like screen” – and although it differs from the more expensive models like HDS and Elite by not having a touch screen function this isn’t really a problem. We used it alongside a larger touchscreen model Elite and the quality of images was very similar if not the overall functionality.

Hook Reveal has a range of powerful fish-finding tools including, Autotuning Sonar, improved deep water performance, SideScan and DownScan Imaging™ and now FishReveal™, which makes fish easier to see by combining the benefits of Lowrance CHIRP sonar and DownScan Imaging™ onto one screen. This allows the user to relate the fish signals they’re seeing to the structure below and reduces the need to toggle between two sonar settings. 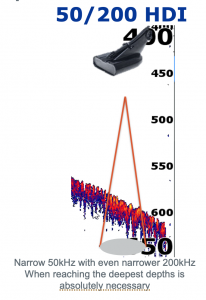 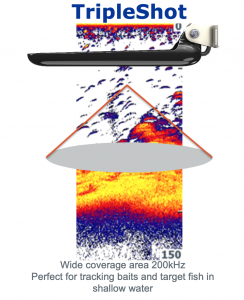 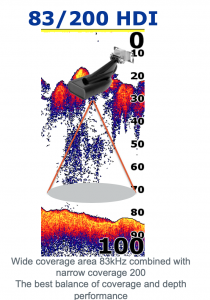 The product comes in three sizes 5”, 7” and 9” anglers can also choose their preferred combination of display size and three different sonar/transducers: TripleShot (High CHIRP, SideScan and DownScan Imaging™) or for enhanced deep water performance, 50/200 HDI or  traditional 83/200 HDI sonar (FishReveal™ & DownScan Imaging™). Triple shot is only available with the 7” and 9” units.

The Triple shot gives a much wider area of coverage and is perfect for tracking baits and target fish in relatively shallow water, 50/200 HDI transducer is a narrow beam which allows use at much greater depths.

The display is simplified and very intuitive and you can customise your viewing very easily so you can have split screen displays so you can include mapping screens with difference sonar views. The menu structure is simple and reacts very quickly. 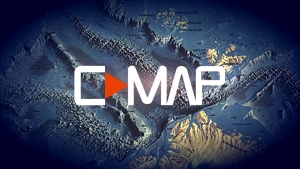 Lowrance have their own mapping software, CMAP, which comes with the unit and if you want to map uncharted waters there is Genesis Live which allows you to create your own maps with detail down to 0.15m contours. Hook Reveal is also compatible with Navionics mapping software including Sonar ChartLive. 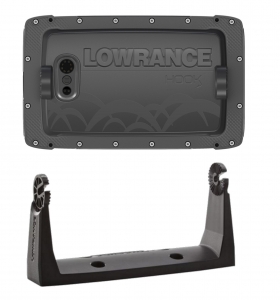 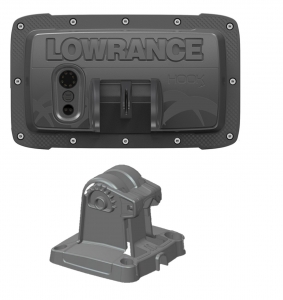 Very simple system, as you might expect and the 5” and even the 7” would fit perfectly on a kayak, inflatable or on a small dinghy. For the 5” here is a simple pillar mount fixing with one ratchet fixing to allow for adjusting the tilt and secured with four screws. The 7”and 9” mount have dual fixings at either side with similar ratchet mounts for adjustment. The unit itself weigh next to nothing which is important on kayaks and smaller boats. They are, or course, detachable for storage off the boat when not in use. 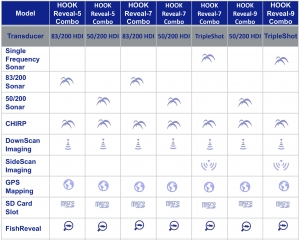 Hook Reveal is effectively an upgrade of their popular Hook range. The main extra being the FishReveal feature which combines the benefit of CHIRP sonar and DownScan Imaging in one screen to allow anglers to relate the fish signals to the features more effectively than in the normal sonar mode. The screens are better resolution the software more intuitive and controls much easier to use. It’s a great product for the price and will compete well with like products on the market. It’s an ideal product for kayakers and small dinghy’s and sits nicely with the more expensive Elite and HDS ranges. If you need more guidance on how to use Lowrance products, then check out a new series of videos produced by Angling Spirit in association with Lowrance.

For more of Hook Reveal go to https://www.lowrance.com/en-gb/