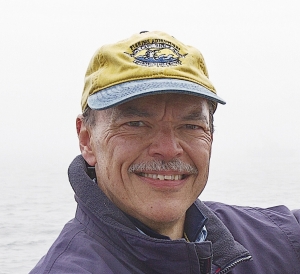 The Coronavirus Lockdown has given us all plenty of time to reflect and while writing the feature on my five-best fish, it got me thinking about the tackle      I used to catch some of them.  While some of the tackle of yesteryear is best forgotten, some of it is still perfectly usable and more than this, can actually add to the whole angling experience rather than detract from it.  I guess it is like classic bikes, cars or boats; not everyone “gets it” but for those who do, life is definitely richer.

On a more practical note, a secondhand purchase of quality older, or classic, gear may well represent a better purchase than the budget tackle of today. Of course, my use of the word quality is subjective to say the least. Not only does each angler’s expectations differ, but also unfortunately manufacturers’ quality control sometimes varies too. When I first started boat fishing regularly, which was back in the late nineties aboard Roger Bayzand’s Sundance, one angler was worried that the only reel he had was a twenty-year-old Abu.

Roger’s reply was:  “There’s nothing wrong with a twenty-year-old Abu, it’s the Abu in the shops today you need to worry about”.

And he wasn’t wrong.  Some of the reel’s that Abu produced at that time in their Far Eastern factories were awful; not so much in design but in poor quality materials and components. If you got more than a couple of seasons out of some of them, you were lucky. Thankfully those days are over and Abu have got things sorted out but it does highlight potential problems and don’t think for one minute it is only Abu who are guilty of this. 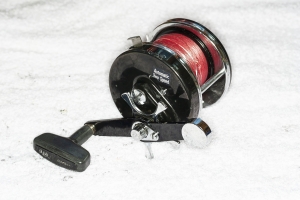 With all that said, my starting point, and some of my favourite reels, is Abu. I guess this is because as a teenage angler I avidly devoured Abu’s Tight lines catalogue each year, dreaming of the day when maybe I would own one.  This I eventually did in 1979 with the purchase of a new 7000, followed by a secondhand 9000 in 1981. Since then I have had a soft spot for the Abu 7000 and 9000 reels. The 7000 was often modified by removing the levelwind or fitting a bigger handle, and its aluminium side plates were a tad fragile. The 9000 was different matter and just worked straight out of the box. It had no level wind, automatic two-speed gears (which you don’t see on any reel today) and solid brass side plates which, while heavy, were virtually bombproof.  Take one apart and you’ll see barely a plastic component in sight. The Abu 9000, along with the 8000 (narrower) and 10000 (wider) is a classic reel if ever there was one. I turned up using one on a winter cod trip about twenty years ago and was told then by one younger angler that it was the kind of reel his dad would use.  I wonder what he would say if he saw me using it now.

You don’t have to go back to the seventies or further to find classic reels though.  There are some much more recent reels that are worthy of the designation modern classics and representing some of Japan’s finest, Shimanoand Daiwa get in on the act.

Firstly, Shimano and their TLD lever drag reels.  Until these reels appeared on the market in the very late eighties, a lever drag reel was exotic to say the least. Lever drags could only be found on reels like Penn’s International. There were others like Everoll, Fin Nor and even Abu with their Ambassadeur 20 & 30 but they were all very expensive. Until the TLD, South African company Policansky’s reels were probably the cheapest but the quality wasn’t really all there. So, it was left to Shimano to bring lever drag to the masses in the UK.  Mono was still the line of choice at this time so the most well known TLD’s are the 15, 20 and 30 sized reels which suit 20-50lb class fishing with nylon line. As things have progressed, it is the hard to find the TLD 5 and 10 which are great for braid fishing and ironically, at one time these were given away free by Shimano UK.  I don’t know the exact story but the 5 and 10 did not catch on in the States so the manager of Shimano UK, I think it was John Loftus but I may be wrong, took all the stock from Shimano USA and gave them away when you purchased one of the larger TLDs.  With the price incentive that already existed, coupled with the extra reel thrown in, it didn’t take long for the TLD to get established. The rest is history as they say. In short, if you can find a decent conditioned TLD 5 or 10 going secondhand, seriously consider buying it. They are light, reliable and have a good drag that can be made even better with the use of aftermarket washers. 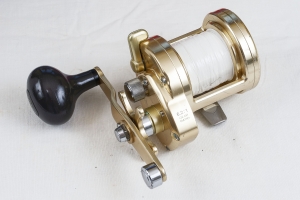 Another Shimano that gets overlooked is the Trinidad.  This was an all-metal star drag reel that boasted a 6:1+ retrieve with plenty of cranking power. Again, it is not the bigger reels that are of interest but the smaller ones; the 16N (narrow), 14 and 12. The 12 is as rare as hen’s teeth so might be hard to find at a reasonable price and the 16N is quite rare too. I have a 14 and it is a great reel for working lures on a wreck or bassing with live baits on the drift. The only problem with these reels is, as time goes by, getting spares as while the world is full of Abu spares, the same cannot be said for Shimano. Look after your reel though and it shouldn’t be too hungry for spares. 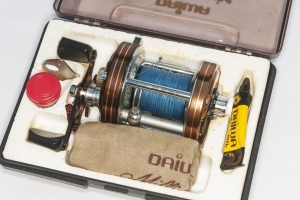 Another Japanese reel that comes to mind is the Daiwa Millionaire.  In the class of reel that holds 200-250 yards of 15lb mono, these reels have been around for ages in various forms.  The 6HM, which appeared on the scene in the eighties, can still hold its own as it punches above its weight for a reel of this class due to its one-piece die-cast alloy frame – very much ahead of its time in the eighties. However, for a true classic feel, the 6HS which came before the 6HM is the one to have.  I have one still in its plastic display case and just writing this piece has seriously put me in the mood to use it; the frustration of not fishing has just gone up a notch again.

Well, I hope this has got you perhaps interested in some of the classic and modern classic reels that are around.  I have only looked at some multiplier reels so have probably only just scratched the surface. Hopefully by the next issue I can get out and put some of my ideas into practise.