With even more people turning to inflatables for their angling adventures Simon Everett reviews another popular model.

For the full magazine as a Page Turner click here 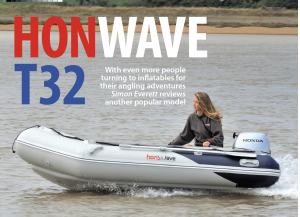 The mass appeal of a fully inflatable boat is well justified because of their inherent ease of use, ease of storage, ease of transporting and affordability. Of all the models available the Honwave range have a popularity rating that has seen them become synonymous with the genre, not least because of the strength of the Honda brand behind them. I have a T32 with a Honda BF10 to put through its paces.

The package size and weight is one of the main considerations to take into account when making a shortlist from the plethora of offerings. The Honwave T32 is ideal for anyone with a smaller car, it fits in the boot of my Golf Estate along with the outboard and remainder of the gear that you need when going afloat. The 10hp is getting to the upper end of what is actually portable at 42kgs, which is the main benefit of a soft inflatable. I did have a 15hp for a while and to be truthful, whilst I could lift it from the car, it cannot be described as portable. Trying to carry it any distance, over any kind of obstacle, was very difficult and one of the aspects of portability is the ability to launch away from a slipway.

The Honwave comes in a folding cover that forms a bag which can be carried solo, but not for very far. The boat is made from high quality PVC that allows it to pack smaller and weighs 39kgs, so you need to be fit to do anything more than lug it short distances. There are straps that you could use as a ruck sack, except my injured shoulder won’t tolerate any weight on it now. The double fold bag is clever and helps to compress the folded boat into a neat, tight package. It is easy to rig or put away solo and I think that is how most people will fish from this model, a slightly larger version would be preferable for two. 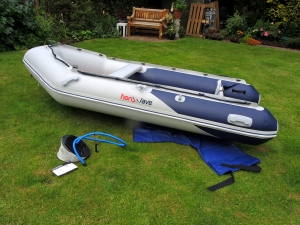 I lifted the Honda BF10 out of the boot and carried it to a patch of grass to lay it down while I prepared the boat. Having lifted the boat bag out of the car it unfolds to form a protective groundsheet for pumping the boat up on. A single action bellows are provided to inflate the boat with, using an electric inflator will save a few calories but I didn’t have that option and burned a few calories from both legs bringing the 5 separate chambers up to pressure. There are two high pressure chambers that form the vee shaped keel and deck, two main chambers aft and the bow chamber. Being diligent I counted how many pumps it took to inflate the entire boat. The main chambers took 250 pumps apiece, the bow chamber needed 160 and the keel chambers also took 250 each. From unwrapping the boat to it being fully inflated, including the time taken to check the pressures with the gauge provided, took me 17 minutes. 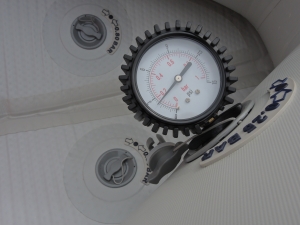 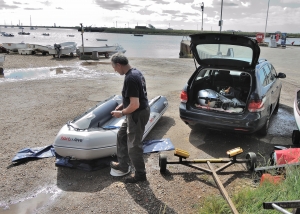 In all I was on the water in half an hour without rushing and doing everything on my own for the first time. With practice that would reduce and shows that using a fully portable inflatable is perfectly practical, even a trailed boat will take 10 minutes to ready for the water, longer if you have to wait for the bearings to cool after a journey of more than a couple of miles, many people don’t and suffer the consequences.

I loaded my camping gear for the weekend and with two tanks of fuel, each holding exactly 13 litres of standard unleaded fuel I set off to give the Honwave a really good outing over the entire weekend. Using the supplied oars to row out into deeper water showed that the rowing position and rowlock placement is quite acceptable. She rowed very well for a short boat and there is sufficient room to swing the oars for a proper stroke. The outboard started very easily on the second pull of the cord thanks to the automatic decompression system, even after a 200-mile journey laying on its side in the car and being manhandled onto the boat. From then on, warmed up, it fired on the first pull every time. 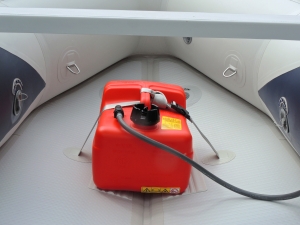 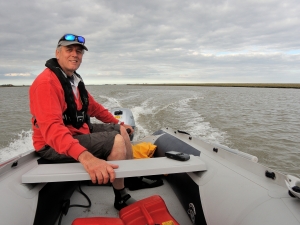 I had a plan to explore the sheltered water of the estuary and camp out overnight, giving me the opportunity to use the boat over an extended period with the boat loaded. Not knowing the fuel consumption, I had a spare fuel tank also with exactly 13 litres of fuel in it, so I was confident I wouldn’t run out. What I wasn’t prepared for was quite how frugal the Honda outboard was going to be. The first few hours were spent at modest speed, this was the first time the outboard had been used, so I stayed close to the launch in case of issues for a while before heading with the tide towards the open sea off the Suffolk coast.

The fuel tanks were strapped in side by side using the supplied tank mounting strap and my camping and photography gear was stowed ahead of the tanks in the bow. I had a crate with anchor, drogue and cordage in, together with my safety bag. Another crate contained my food and cooking facilities for the trip, both crates fitted perfectly across the transom, as if they were purpose made for the job, in reality that was just a lucky coincidence. There are eyebolts inside the transom to secure the outboard and cargo with. For one person the boat is ideal, for two it would be a tight fit, I was on my own so I was Ok. I had my reservations about the air-deck but these were soon dispelled, the hull actually works very well indeed and the extended planing tabs help to trim the hull and get her onto the plane and maintain a crisp, low wash at 10 knots. After a couple of hours, to get the motor broken in a bit, I headed out to sea and increased the speed bit by bit gradually easing the brand-new motor into normal operating condition. 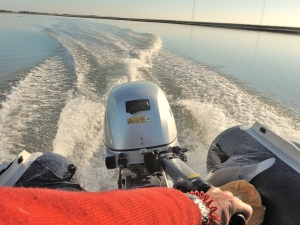 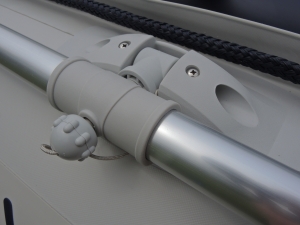 Spending a day breaking an engine in properly will pay dividends throughout the rest of the outboards life. This didn’t mean I had to pootle about though, even though it is only a 10hp outboard, the T32 was spanking along at 15 knots with the engine revs only at cruising speed.  There was a noticeable chop with the odd white horse to give the sea some shape and the boat a realistic test. That vee hull and the 42.5cm tubes combine well to soften the ride and keep the spray outside the boat. I was impressed at the ride, the fiberglass thwart provides enough support between the tubes and I didn’t feel the need for a cushion even after 7 hours on the water.

On the way back, once back inside the estuary, after the engine had been running for about 5 hours, I opened her up to full revs for maybe 20 seconds and saw 18.3 knots on the GPS. This outfit can shift and is comfortable doing it, even with that bit of lop at sea I was able to get up to 16 knots and maintain it through the waves. At the more sedate speed it surprised me just how comfortable it was. I was enjoying myself!

I found a spot with a post to make fast to and hauled the boat up the soft shingle and made camp for the night. I wanted to explore the full length of the estuary in the morning and needed an early start to catch the tide. I went to bed with the alarm set for 03.00 to be able to strike camp and get the boat on the water to take the tide up the estuary. With the handles set either side of the inside of the cones it was a straightforward task to pull the boat down the shingle to get her afloat. The Honda fired into life with two pulls on choke and purred as I eased out into the flow and deeper water. A light inflatable and small outboard are so versatile and easy to manage on your own.

Once warmed I opened the throttle to cruising speed and made my up the estuary. Clear of the moorings I had a short blast at high speed and the boat ran up to just over 18 knots again, the vee hull providing enough lift to reduce the wetted area reducing the drag the engine has to overcome. This will depend upon the loading, obviously, but the gear I had aboard was very representative. 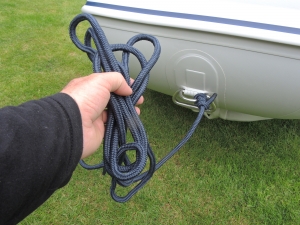 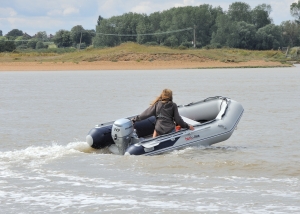 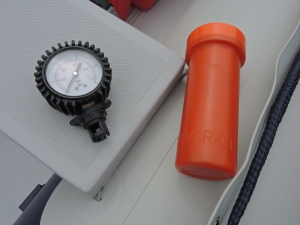 I explored right to the very limit of the estuary and over the two days covered 47.8 nautical miles, much of it at cruising speed below 15 knots, but the fact that there was still over 1 litre of fuel left in the first tank proved just how economic this Honwave and Honda BF10hp outfit is, there will be few days you will cover 50 miles when fishing in a small boat like this. I now have the confidence to go out for the day with just the one tank safe in the knowledge that I have an easy 35 miles in the tank with plenty of reserve, regardless of the conditions.

One downside of the airdeck is the reverse sheer inboard, the sloping deck means everything migrates, but there are two D-rings forward where you can attach a cargo net to help keep things contained ahead of the fuel tank, I shall use one next time. I look forward to getting out after some fish now the boat has had a good shake down. It is a simple, compact craft that is ideal for solo use and will take two with light gear. As an inflatable keel it performs better than it should and the fact that it comes with the Honda backing in the form of a comprehensive warranty of 6 years for the outboard and 2 years for the inflatable and one of the reasons they are popular.