Sophie Honey describes her first fishing trip out of lockdown…and what an adventure it was too.

After 5 weeks of being cooped up and only allowed out of the house once a day I was delighted to hear the announcement that fishing was allowed again. I jumped at the opportunity when my dad (Ross Honey) suggested we could have a day out sea fishing. I simply love the thrill and excitement of fishing and could not think of a better way to spend my first day out of confinement.

With an earlier wake-up than I had in weeks, Dad and I were off to the boat! To use the cliché, ‘it was as flat as a pancake’ would be an understatement, everything was perfect from the convenient tides to wind conditions and it was even surprisingly warm!We got to the first mark in the Solent and set anchor. As soon as the boat had settled, we saw shoals of fish on the Lowrance fish finder under the boat. I quickly got some mackerel feathers over the side holding my light spinning rod with great anticipation. I wasn’t catching anything yet knew they were there – Dad gave me some advice of fishing at all levels rather than the one and almost instantly caught three at once! Safely landed on the boat I got the line down again catching ten mackerel in quick succession what a great start to the day! At the same time Dad prepared other lines with bait of squid and crab – I had just reeled in some more mackerel and saw that there was a bite on another rod I could feel the fish on the line but could tell it was nothing big; it was just a little dogfish!

The morning continued in the same vein, but we wanted to catch some bigger fish and moved to a second mark. Within 5 minutes at the second mark I was playing what turned out to be a small tope and Dad had a smoothound! At this point I have to remark how fishing is such a brilliant activity, especially at the moment, you’re far from the problems and restrictions imposed on land so it is something that I would definitely encourage as many people as possible to do! There is such a serenity of simply being out at sea that you can’t find anywhere else and to add to this I spent an amazing day out with my Dad creating some magical memories.

Sorry, I digress, back to the fishing! One of the rods with a bait of crab suddenly arched over and line started screaming off the reel I instantly knew that this was a big fish… I struggled to get the rod out of the rod rest and then held on as more line was flying off the reel even with the drag well set. The line was cutting through the water up tide then down tide. After several minutes of a patiently fighting the fish my arms were aching and I continued reeling away and telling dad this was a big fish (also stating it would be quite embarrassing if it was small) then I saw the fin of what looked like a monster come to the surface and dad had the net ready. It was huge, and with my adrenaline on a totally different scale I attempted to lift the fish directly onto the boat – bad move.

There was a loud crack…..a noise I won’t forget, as the top half of the rod snapped. Fortunately, dad had the net under the fish and securely brought it onto the boat complete with several bits of rod. I can tell you dad was not impressed but he also said that fishing is a constant learning process; I am part of the next generation of angling, so I’ll learn and adapt from past mistakes, I know I won’t try to bring a fish as big as that straight onto the boat again without use of a net! I admired the huge fish remarking on the phenomenal colour of its eyes and how powerful it was. it was the biggest fish I had ever caught and wanted to get my line back in the water again quickly to catch another one…

There was a period of slack water as the tides were turning so, we moved to a third mark – this time the aim being for bass, a fish I have never caught before. Despite seeing a few shoals with the Lowrance fish finder and drifting over the mark several times, the afternoon didn’t produce anything quite as big as the magnificent Smoothound but several more dog fish and a small conger eel.

With my face like the setting sun – exhausted and just a little burnt, we made our way back to the marina. It was a fantastic way to start the easing of measures after lockdown

I’m hooked and can’t wait for the next day I’m out on the water with more memories and stories to tell!

Editors Note: It’s always great to hear about someone young getting out and enjoying a bit of sea angling – so we thought this story was particularly uplifting, despite the broken rod and especially after the confinement we’ve all had to suffer. 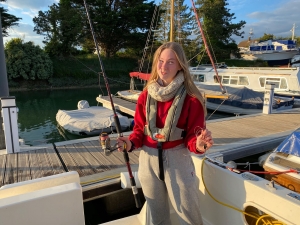 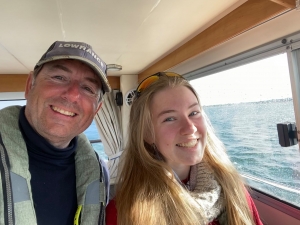 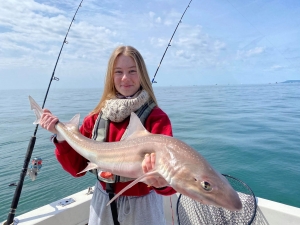 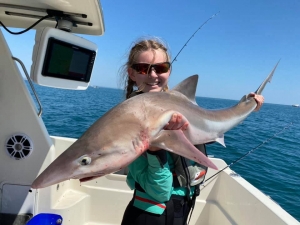