It’s been a very interesting month here in Panama. We’ve made a little piece of kayak fishing history by catching our first Pacific sailfish on a popper with spinning tackle. It was an incredible moment for us all. We have also seen some very special trophy fish caught by some of our lucky guests. However, overall the fishing has been a little inconsistent this last month probably due to fluctuating water temperatures driven by the persistent trade winds this year. It won’t last for long as we had our first rain shower last week and this signals a change in the seasons and the fishing. There’s never a dull moment here on the ‘Wild Coast’ of Panama. Read on to find out how things panned out…

This week on the ‘Wild Coast of Panama’ we had a super bunch of well-travelled anglers staying at the lodge. Andre, Michel and Gerard from Holland, Jorg from Germany, Louis-Philippe from Canada and Jerome from France. They brought with them a wealth of experience and fishy tales from around the world. These mixed groups really are a pleasure to host, the variety of experience and culture always makes for a good atmosphere in the camp.

This was one of those weeks where the elements seemed to conspire against us. Things were slow compared to how the fishing can usually be along our beautiful rain forest coastline. The water was the coldest it’s been all season and appeared to be rich in natural food sources. For these two reasons I believe the fishing was not quite firing on all cylinders. In short, the fish were full and had plenty of choice on the menu this week.

That said, our bunch of die-hard anglers never once took their eyes off the ball and stuck at it. They were rewarded for their efforts with some excellent top-water yellowfin tuna and jack action on some of our offshore spots. This was also where Gerard got the chance to experience the thrill of catching a stunning pacific sailfish on a popper from his kayak. This was a very special moment for us all.

It was an incredible feat of angling and a piece of kayak fishing history in the making. I’ve not heard of another sailfish caught on a popper from a kayak anywhere. [use this as a breakout clause] The jigging action had its moments and our guests were finding god numbers of pompano, the odd yellowtail snapper, roosterfish, rainbow runners, tuna and bonitos on some of our spots. With the cold water we were hoping for some amberjack but they never showed up.

The live-baiting seemed to be the best tactic for the bigger fish this week and our guys had a huge amount of bad luck – getting sharked, getting reefed, bite offs, hook pulls and the rest. It’s the nature of the beast. It wasn’t until the very last day that Michel managed to find himself the awesome cubera snapper that he was seeking. Louis-Philippe also managed another trophy cubera but his was on a sub-surface lure….a very fine catch indeed. While we were on the water it felt tough but, looking back through the pictures, it’s plain to see that the guys caught some fine fish and they certainly all have a few tales to take home with them. We had a great adventure exploring many miles of beautiful coastline with some very fine trophy fish thrown in for good measure. It could have been a lot worse. 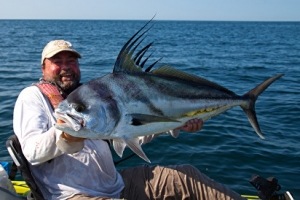 This week on the ‘Wild Coast’ we welcomed Mark, Tim and Cary from the USA and Dave from Australia. Our first Aussie guest. Even though the fishing is excellent over in Oz, the lure of a big cubera snapper and a roosterfish was too much for Dave and had him packing his bags to come and join us.

The guys fished hard all week with artificials, spending the majority of their time popping, jigging, casting and trolling a variety of our favourite lure patterns. Live-bait was hard to obtain but we did get a few opportunities, and these all ended in tales of ‘the one that got away’. Undoubtedly, the culprits were big cubera snapper and, as is often the way in shallow water, they have the upper hand. You win some you lose some! Next time guys!

20 Species – including a Corvina

The lure fishing produced some good action and a nice variety of fish. The guys managed twenty different species between them with some very nice specimens in the mix. We had some great jigging for broomtail grouper on one of our offshore spots one morning in particular and saw the welcome return of the blue trevally to our shores. Some stunning rock Snapper, a nice mahi mahi, a few very nice yellowfin and pompano……and a stonking corvina for Mark were some of the week’s highlights.

I even managed a nice cubera snapper on the popper from the safety boat myself. I’m normally drifting way offshore when I’m keeping an eye on our guests so don’t usually catch much other than a few tuna and jacks here and there. I was most surprised when drifting a good way off that a nice 30lb cubera popped up through 65 feet of water and smashed my popper. I was rather pleased as it was my first this season and after a quick photo she was released to fight another day. We release all the cubera we catch here.

It was a good week with plenty of variety, our anglers were just a little unlucky when it came to those big trophy fish that are so sought after by our visiting anglers. That’s fishing for you.

This week we had familiar faces from the UK come stay with us at the lodge, which is always nice. Paul Harman who was returning for his 3rd time with his buddies – Adrian, Rob and Martin. As usual, roosterfish and cubera snapper were top of the wish list for our anglers and I’m delighted to say they were not at all disappointed this week. Everyone returned home happy with quality trophy fish under their belts. That’s how we like it!  We had a couple of quieter days during their stay but on the whole the fishing was good. We started the week in fine style on top-water lures. The lads managed to get their strings pulled good and proper with many jacks, blue trevally and some very nice tuna. Rob even managed to catch two jacks on one popper, such was the action!

The roosterfish were back inshore this week which was a treat as they had been absent for a while, no doubt feasting on a food source elsewhere. Paul and Adrian each managed to catch very nice trophy fish as can be seen from the photos. Fish like these always make our anglers smile. We caught seven in the week, all but one of which were caught on artificials and the biggest of the bunch on a live-bait.

We also spent some time targeting our resident cubera snapper and found some success on a couple of occasions. Martin had never fished from a kayak before and very rarely fished in saltwater but he stuck at it and followed our advice. He persevered with trolling one of our hot lure patterns and was rewarded with a lovely trophy snapper which will be added to the ‘Cubera Wall’ in the lodge.

Not to be outdone, Rob then snuck out on the beach in front of the lodge that night to try for a shark! He was using leftover bonito flesh from the days discarded live-bait and on his second cast he got a good bite! We all watched in amazement as the rod hooped over and a terrific fight ensued. Rob battled the fish in the surf for a good while before sliding yet another stunning trophy cubera up the beach to claim his place on the ‘Cubera Wall’ also. Not the shark he was after, but we didn’t hear him complain! 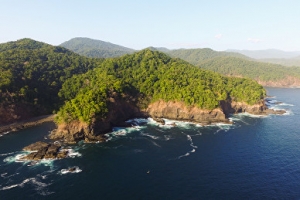 There aren’t many places in the world where you can just stroll out the front of the lodge and pull out a fish like that…….but ours is one of them! It was a good day for snapper fishing. As well as the trophy fish, we caught plenty of other species on the jig and lures. 15 species in total and plenty of rod bending fun to keep our anglers entertained all week. We travelled all around the peninsular taking in some epic scenes as we went. We saw whale sharks, manta rays, dolphins, humpback whales and turtles. It was a good week. Paul is back next week with 3 more friends and returning guests……what will the fishing have in store for us? Watch this space.

That’s it for this month, I hope you’ve enjoyed the latest update and photos. I’ll be back next month with more. April and May see’s the Sailfish numbers ramp up, we’d love to see more of these for our guests. You can guarantee we’ll be trying for them!

Our diary is open for the 2019/20 season which will start this coming December. January to March is filling fast already. Get in touch if you fancy coming to join us for some world class kayak fishing, we’d love to see you over here.