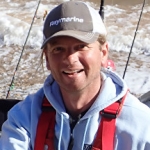 Following the launch of the new Rayamrine fishfinder/GPS, Element, Mark Radcliffe has put it through its paces to find out more.

I’ve been a long-term user of Raymarine products on my kayak. I’ve also been part of their Ambassador team for several years, so its always exciting when a new development or product is released to see what improvements are coming to the market.

The newest unit, just released, is the Element. I’ve been trying the it out for the last couple of months and here are my initial thoughts and from a kayak anglers point of view

Straight out of the box

One of great things about Raymarine products is the ability to use them straight out of the box. This made the Dragonfly one of the most popular fish finders on the kayak fishing scene, and the Element is no different. Simply plug it in, switch it on and it is completely ready to use. Whilst not a complete technophobe, I like many anglers, hate reading instruction manuals so having something that is so simple to use and so intuitive is a great asset.

Compact all in one transducer

Over the last couple of years there has been a tendency towards larger and larger, if not multiple, transducers on top end fish finder models which may work well on boats but is not ideal for a kayak. So I was really happy to see, when I unpacked the unit, it only uses a single compact transducer. The Hypervision Chirp transducer only measures 20cm by 6cm enabling it to comfortably fit into the moulded transducer recess on my kayak so does away with any extra mounts or arms so often seen these days. I’m not sure how they have managed to get a small transducer to enable so much technology, but for a kayak angler it’s a real bonus.

Again, the size and weight of this was a pleasant surprise. Being around a half the depth of the Axiom unit and weighing under a kilo, the display unit is incredibly easy to mount on a kayak. The Element comes preprogramed with seven display variations varying from a simple GPS chart display to a four-way split screen fish-finder option offering Downvision, Sonar, 3d and Side imaging quadrants all on the same screen. There are also three user programmable keys to flick between your three preferred set ups at the press of a button.

The waypoint marker is a single highlighted button and the Fast Core processor allows for immediate way point positioning before the tide or drift carries you away. Everything about the unit seems designed for simplicity of use whilst also offering fantastic on-screen definition.

1.2 Megahertz – What a difference

This has been the major step up in the Element from previous units. The increase to 1.2 Megahertz on the Superior HyperVision has made a massive difference to the fish finder functions. The Dragonfly was a great unit, but the increase in definition and clarity on the Element is massive. This particularly comes into its own with the side vision. Over the last couple of months, I’ve used the unit extensively on fresh and salt water and the clarity of the side vision has made a massive difference in my ability to find those all important drop offs, ledges and features which obviously increases your fish catching opportunities. I’ve been sceptical of side imaging in the past with vague shadows supposedly indicating fish, or reefs but the clarity on the Element is amazing, there is no doubting what you are looking at and the side imaging feature is now a permanent fixture as the bottom half of my display screen. The unit also has a built in Realvision 3D offering another dimension to identifying features, clearly mapping the contours of the sea bed and highlighting fish holding areas.

Prior to receiving the unit, I was told I’d need to be upgrading to lithium batteries because a unit with so much technology would be drawing a huge amount of power. This most certainly isn’t the case. I use a standard 13v lead acid battery and after an eight-hour session the volt meter built into the unit is still showing over 12v so you are in no danger of running a standard battery down in a normal session.

The question all kayak anglers ask – how waterproof is the unit? Obviously mounted to a kayak all electronics take much more of a pounding that on a boat as we are at water level and constantly being hit by waves and spray. In my early days I was getting through at least one basic model fish finder a season as corrosion ate through the pins. There have been questions over the durability of the Dragonfly over the last few years and without regular care water ingress into the connectors and the SD card slot can cause problems.

I was really happy to see an immediate change on the Element – the SD card slot is on the front of the unit, such a simple change but it immediately removes the impact from 99% of spray and waves. The connectors also come with collars that are screwed tight again decreasing the likelihood of any water ingress. Whilst its still a good idea to treat all pins and connections with a silicon spray after use, this unit certainly looks like a lot of thought has gone into making it as water proof as possible.

Whilst I certainly wouldn’t recommend this ‘experiment’, I made a school boy error on a recent session in South Devon which tested the unit to the extreme. Returning to the car I obviously hadn’t pulled my yak far enough up the beach and turned around just in time to see a wave dragging it out to sea, before the next one rolled it in the surf. After a mad dash to retrieve the yak and all the gear washing around on the tide line, I remembered that the Element was still rigged up on the yak. I’d only been using it for a fortnight and I’m sure this wasn’t the type of product testing that Raymarine had in mind, being submerged and washed around in the surf. However, a quick inspection showed no hint of water ingress into any of the connections, or the card slot. I re-launched half an hour later and the unit worked perfectly and has done so ever since. That was two months ago now and despite repeated checks I can see no signs that water ever penetrated those area despite the unit being fully submerged for a couple of minutes. Based on this experience I can only say that the unit appears to be pretty bomb proof.

Obviously, its early days, and I’ve only been using the Element for just over a couple of months so a full review is impossible. However, my initial impressions are that it is the finest unit I have used on the kayak. Whilst it probably isn’t the case, everything about the element seems to have been made with kayak anglers in mind, from the transducer and unit size, to the power usage and ruggedness of the unit itself.

In its price range I think the Element offers the clearest and highest definition imaging that I have seen, the use of 1.2 Megahertz has certainly been a game changer in this aspect and I’d expect to see the Element becoming the go to unit for kayak anglers over the next 12 months.