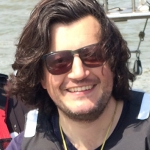 It can be a devastatingly effective, and exciting, way to catch, often resulting in specimen fish. But live baiting can be a tricky technique to have confidence in. Once you’ve mastered it though, you’ll be hooked. David Mitchell explains all.

You never forget your first time. That ferocious rod-bending take as a predator smashes into its prey. Live-baiting can make your heart feel like it’s going to burst out of your chest and over the transom.

It’s an effective method for almost all predatory species in the right circumstances. Bass, cod, sharks, turbot and brill are all species in UK waters that spend a lot of their time hunting live prey. 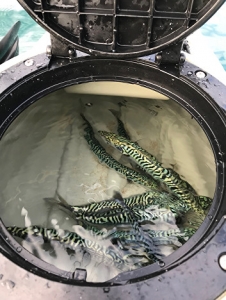 To be successful it’s worth first thinking like a fish in order to understand when, and why, live baiting on any particular occasion is going to be successful.Fish, like any other predators, have to weigh up their energy expenditure chasing prey against the energy they’ll gain from eating it. If there’s a deficit, the chances are they’ll take an easier option if it exists. The most successful, and therefore largest and oldest, predators can be agile hunters but can just as easily be lazy opportunists if there’s an easy meal to be had.  So, if bass, for example, are feeding on a glut of vulnerable and energy-rich peeling crabs don’t be surprised of they show no interest in your oh-so-tempting looking live sandeel – wrong time, wrong place! On other occasions, chasing down live prey may be the only option or a good use of energy if the pay-off is a belly full of oily sprats or mackerel and a better chance of producing viable eggs and successfully spawning that year.

On a trip to Courtmacsherry in County Cork some years ago, try as we might, nothing other than live sandeels would tempt the bass – of which we had none. No matter how realistic our sandeel imitation lures were, they weren’t what the bass were tuned into.

Once you’ve engaged your inner fish brain the next trick is to keep the faith. Live-baiting can often be a waiting game. Long periods of nothing interspersed by heart-thumping action. Too often the temptation can be to give up and switch back to a dead bait. As with all forms of fishing, confidence in the technique you are using is essential and more often than not pays off in the end. Live baiting is no exception. 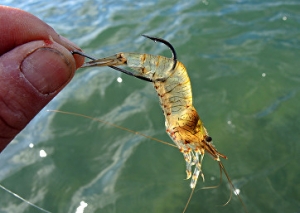 The humble, underrated, and often overlooked, prawn must be the entry-level bait into live-baiting. Easily gathered, hardy and resilient, live prawns are a superb bait on their day for bass, giltheads, and flatties. Hooked through the last but one tail segment on an Aberdeen wire hook the flick, flick, flick motion is virtually irresistible when fished under a float. They can be kept quite happily for a few days in a cool bucket of wet seaweed and gathered from any rockpool with a kid’s fishing net from your local bucket and spade shop.

Both the more common lesser sandeel and the greater sandeel, also known as launce, can be deadly bass baits when, as discussed above, they are ‘on the feed’. Turbot and brill seem to feed exclusively on fish baits which they lie in wait to ambush while buried in the sand. As a result, downtiding or drifting live eels over sandbanks is the number one method for bagging a monster flattie. Nicking lesser sandeels through the lips keeps them alive and allows them to swim naturally. Launce can be rigged by passing the hook into the mouth, out of one of the gills and nicking the hook gently in the belly of the fish. Live lesser sandeels can be collected from sandy beaches once you’ve located them. Seine nets are also used by some (and may require a license to be used) while launce can be caught on feathers such as sabikis. During the summer good tackle shops supply live sandeels (when available) which can be kept alive with aerators, live wells or tanks on board your boat as long as they’ve got a good supply of cool, oxygenated, water. 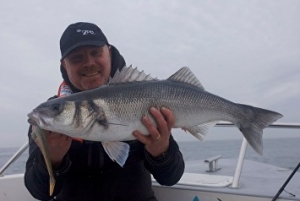 Depending on where you are fishing pouting can be a five-star live baiting choice for bass, pollack, cod and congers. Small pout are often used to catch bass commercially by rod and line, such is their effectiveness. Pout are often the best bait when fishing over reefs and wrecks or anywhere where there’s some structure like piers and reasonably deep water. They can also be deadly drifted over reefs using a Portland or helicopter rig and lip-hooked with a treble hook. Pout are notoriously fragile and need to be handled gently. Those brought up from depth are often damaged by the pressure change so gently, gently is the name of the game.

Bass and cod will engulf an unsuspecting whiting in the right conditions. Reefs and wrecks where predators stalk looking for prey are often most effective but any ground can be productive where competition is high, other food sources are scarce or a sick, or dying whiting looks like an easy feed – think of it like the wildebeest on the savannah, the lions will look for the young, the old, the weak, the exposed.

Mackerel make a fantastic summer and autumn live bait choice for almost every species from sharks and tuna to bass and big flatties. Feathering mackerel at the start of a session means you can fill a live bait tank and have a fresh supply of bait to hand. Mackerel don’t react well to too much handling and will eventually die. Storing them in a cool and well-oxygenated tank is important. Most good charter boats will have a live-well with a flow of fresh, oxygenated, fresh sea water keeping the fish in top condition. If you can get hold of them, Horse mackerel, or scad, are much more robust but just as effective and will keep going all day long if handled with care.

For drifting with sandeels Rob Mainwaring, of Mainwaring’s Angling Centre in Swansea, recommends using an as uncomplicated rig as possible; a flowing trace with four to six feet of 20lb fluorocarbon for the trace with a 4/0 circle hook which he believes makes the sandeel swim more naturally than a J-hook does. The fluorocarbon gives a bit of elasticity, compared to the braid, but also allows you to be in direct contact with the bait. Lengthen your hook length if at anchor to let the sandeel swim in the tide more freely. Ultimately, in a shoal of other fish you are looking for your bait to look natural but not too natural, it needs to stand out amongst the crowd as different and an easier target for a predator to seek and destroy.  Clive Hodges, SBA contributor and keen Sussex bass live baiter, likes to float fish a live bait in depths of 50ft or less and light-line his live baits in deeper water. For float fishing Clive will normally use a tangle-free helicopter rig with a cigar float and 2-3oz lead. In deeper water he’ll use enough lead to drift a helicopter rig with a 6ft, no need for any longer, fluorocarbon trace. Clive only uses circle hooks which he believes reduced his hook-up rate down to 80 per cent, compared to 95 per cent with J-hooks and trebles, but prevents deep hooking and for Clive is therefore a price worth paying to ensure fish can be returned in top condition.

Clive rigs his live baits by passing the circle hook, which would tend to be between 6/0 and 9/0, through the nose of the bait and out below the lower jaw exposing the hook point. Using your fish finder, set your live bait to drift approximately two feet over the shallowest point of the wreck or reef – bass will come up 20 feet or more to hit a live bait. Most bass will hit the bait before repositioning it to engulf it. Wait for the fish to take the bait fish allowing the circle hook to anchor itself on its way out of the fish’s mouth as tension mounts on the line. Don’t strike, give the time for the fish to swim off, and reel into the weight of the fish to set the hook firm. All Clive’s live baiting is done on the drift to cover the most ground and seek out the pockets of a wreck or reef where the bass will be holed-up out of the tide waiting to teach any unsuspecting fish a final lesson! Interestingly, Clive only live-baits in clear water. He doesn’t have confidence in poor visibility.

Live baiting for open water pelagic predators, like sharks and tuna” requires somewhat of a different approach, as Steve Murphy, director of Bluefin Tuna UK, explains. “The first trick is to keep the boat alive in a good quality live bait well. Don’t overfill it and try to ‘match the hatch’ with what the largest species is already feeding on”. Again, Steve will always use circle hooks to prevent deep hooking. However, he’s adamant on using inline circle hooks rather than offset hooks which, he believes, causes the same problems at using classic J-hooks.  With baits like mackerel you have the choice to lip-Jaw hook the bait or bridle rig it using a baiting needle and elasticated thread to suspend the fish and leave the gape of the hook clear to increase hook-ups.  If slow-trolling you can also bridle rig the bait through the nose to it swims more naturally though the water. Alternatively, Steve recommends hooking the live bait 1cm in front of the dorsal fin or, if the predators are deeper, try hooking you live bait between the dorsal fin and the tail which tends to allow the fish to swim deeper.